With the fourth season of AFLW in full swing and only a handful of days to go before the ICC T20 Women’s World Cup, I was considering what the best footy-playing cricket side could look like.

After a few months of careful consideration, here’s what I came up with.

1. Sabrina Frederick
Sabrina Frederick is synonymous with being an attacking footballer. She loves a goal and the contest. A fierce opening batter is what this hypothetical team would need to get some early runs on the board, and Frederick fits the bill.

2. Erin Phillips
Erin Phillips is solely in the side because she’s Erin Phillips. A multi-sport hero in her own right, she could make an impact as an opener and much to the surprise of everybody, guide this dream team to victory alongside…

3. Jess Duffin (c)
Duffin is already well-known in the AFLW and cricket spheres, playing as captain of the Melbourne Renegades this past WBBL season and also representing North Melbourne in AFLW. I’m a huge fan of the Renegades skipper, as she’s been the most consistent performer this past WBBL. Duffin won’t be playing either code for a little while though, with the recent announcement that a future Gades (or Roos) legend is on the way. 4. Tamara Luke
She’s one of the new members of an expansion AFL side in the St Kilda Saints, but to Luke’s premiership teammates at Hawthorn, she is affectionately known as Big Show. As many cricket fans would know, the great Glenn Maxwell also bears that nickname, so it is perhaps a given that this rampaging Saint will hit the Kookaburra ball around a bit.

5. Darcy Vescio
Darcy Vescio is in at number five. When it comes to her batting and bowling ability, it remains to be seen, but one thing I and many others can tell you is that she’d be great company in the slips cordon – she loves a bit of friendly banter.

6. Courtney Webb
Webb had signed with Carlton in 2017, but decided that a cricket career would be the better career choice – and she has absolutely delivered as a cricketer. This hypothetical team’s captain would agree with me that Webb is a dead-set hero after she smacked Marizanne Kapp of the Sydney Sixers over the rope off the last ball for a massive Renegades victory at North Sydney Oval in November of 2019.

7. Brianna Davey (wk)
Coming in at seven in the keeper’s spot has to be none other than Brianna Davey. A goalkeeper in a previous stint at the mighty Melbourne Victory, it’s only natural she puts on the gloves. She is also a proven leader and would likely take a spot in the leadership group. If ever tasked with the captaincy, she’d be much more effective in summoning the DRS than our incumbent men’s wicketkeeper Tim Paine.

8. Steph Chiocci
Chiocci has shown her cricket skills in an Instagram story. She had an indoor hit with teammate Chloe Molloy once – not sure who won that contest – and has a decent bowling action, but could play the all-rounder role. 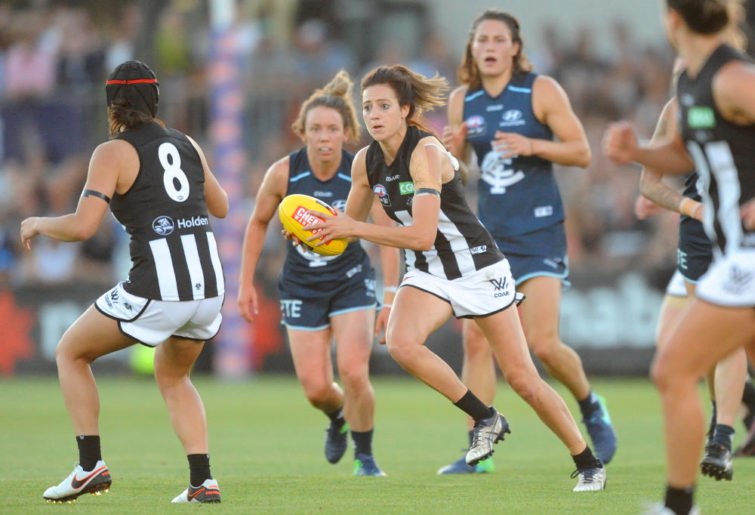 9. Alice Edmonds
In at nine is new Richmond recruit Alice Edmonds. She’s pretty tall, potentially can bowl a bit of pace, fulfilling a Pat Cummins-like role within the side.

10. Kate McCarthy
The lone spinner in this line-up, McCarthy has already made the Saints XI as posted on her new club’s website and is also in at number ten in a side captained by Shane Warne. The Saints XI also has Pakistani legend Wasim Akram in the side, and fair enough – he loves the Saints, being a Melbourne local. McCarthy might also have the ability to sledge well, which helps any cricket side.

11. Emma Kearney
Kearney played for the Melbourne Stars before committing to AFLW, playing for North Melbourne and previously the Western Bulldogs, where she won a league best-and-fairest award. Very handy with the ball and will spearhead the pace attack as an opening bowler.

For the 12th player, it’s a hard decision to make – but perhaps I might leave this one up to the reader!

Trade period recruit Bradley Hill is a surprise inclusion in a revamped St Kilda leadership group for the 2020 AFL season.