Eric Hipwood
A deep dive of his socials reveals he rocked a ’90s boy-band man-bob for a significant part of his youth. The fact that his youth comprised the early 2010s yet he still had the fortitude to rep that do tells you everything you need to know about the man.

The Eel, as he is affectionately known, is a man of simple needs. He’s on record as stating that his most treasured possession is his bed. This is no doubt the domain in which he dreams up exploits such as the four-goals-in-the-third-quarter decimation of the Demons in Round 15 last season.

In many ways Hipwood still matches the draft-day description bestowed upon him by Lions recruiting manager Stephen Conole: “An athletic beast. He’s very raw and a little physically underdeveloped”. Nonetheless he’s still just 22 (with plenty of time to go full Chris Tremlett and full Mike Bibby), has a 75-game and 113-goal apprenticeship behind him, and is locked in for Brisbane until 2023. Get hyped.

Daniel Rich
Part-cyborg. Or at least, a government-led genetic experiment gone right. Possesses a left-leg closer to rocket-launcher than mere limb, accelerating a Sherrin to warp-speed off his boot. A former perennial whipping boy. At least, according to Nick Riewoldt: “He was maligned for ten years, Daniel Rich. When is he going to live up to expectation?”

Worry no more, Saint Nick. Bam-Bam attacked 2019 with the incandescent rage of, well, his cartoon counterpart woken up early from a nap. He averaged 22.5 touches, 5.7 marks, and 6.5 rebound 50s, coming second in the AFL for metres gained, third in total kicks, and fourth in rebound 50s. He celebrated his 200th game in style, roosting an outside-50 major in time on in Round 18 to seal a victory over North.

He held fort while highly regarded draft picks left in droves, and is now reaping the benefits of a rejuvenated squad. 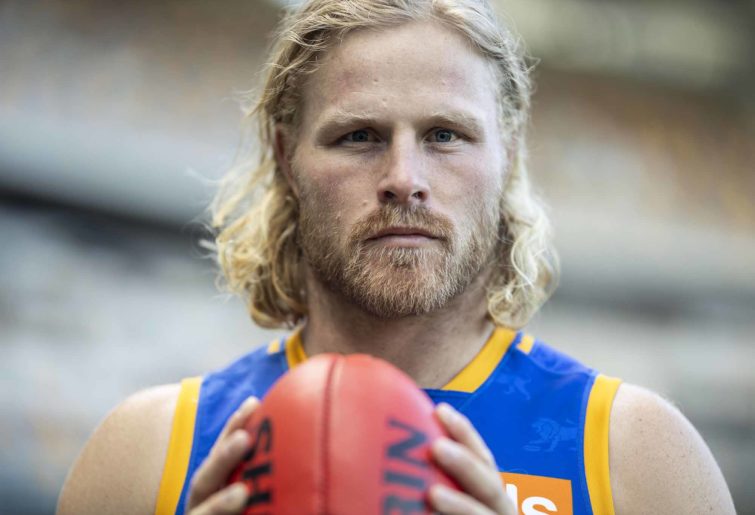 Stefan Martin
Mal Michael is the closest thing to a mountain that has walked upon a football field. With a pair of quadriceps chiseled from granite, and biceps carved from hard maple, he made forwards hurt just looking at them. His weight-room exploits were fearsome.

Since then Martin has gone – literally – from strength to strength. Despite being on the wrong side of 30, Martin signed a one-year deal to stay on in 2020. No doubt his role as regular host of Locker Talk helped seal the deal. It’s good to see players lodging their Roaming Brian audition tapes.

Stef will be successfully roaming the Gabba in 2020. Opposition ruckman beware.

Grant Birchall
After 248 games, Birchall was the last of the four-time premiership players at Hawthorn. So naturally, he decided to do a Hodgey in 2020 and move north. If there’s one rule change that the AFL should enshrine this year, it’s the requirement for one Hawthorn veteran per year to sign as a playing defensive coach at another club. I’m looking at you, Shaun Burgoyne.

A member of the Tasmanian Football Hall of Fame, he’s one of six players and staff at the Lions hailing from the Apple Isle. They breed them tough down there, reflected in the fact that at one stage he went 741 days between AFL games (Round 15 2017 to Round 17 2019). According to some hippies, 741 stands “for those who are spirited, determined, ambitious, and focused on their goals”. So, there’s that.

He’s also not a dog person, as witnessed by his efforts of being a one-night owner of a six-week old Labrador puppy bestowed on him by Alastair Clarkson. He is more suited to felines of the king of the jungle variety, I guess.

The Gabbatoir
The period between 2000 and 2005 saw 14 of the top 20 attendances in Bris Vegas, culminating in 2004 when the average crowd at the peak of Brisbane’s mighty empire was 33,559. Adoring fans crammed in to watch their heroes wreak havoc in their footballing colosseum.

However, on 2019’s signal, the Lions unleashed hell. Ten wins from 11 Gabbatoir games. Five-goal deficits overturned against West Coast, Hawthorn, and North Melbourne. The highest ever crowd in their gallant qualifying final loss to Richmond. Thumbs up.

‘That is as big a miss of an umpiring decision as you’ll see!’