Five years on from that extraordinary World Cup match in Auckland, Boult is the world’s number one ODI bowler and easily NZ’s biggest weapon with the ball in the three-match ODI series, which starts in Sydney tomorrow.

The Kiwis have a fine ODI attack, which has helped them climb to number three in the ODI rankings and tie last year’s World Cup final against eventual tournament winners England.

Boult, though, is the only quick in New Zealand’s squad who has a good record against Australia in ODIs. New-ball partner Matt Henry was demolished the last time he toured this country, with four wickets at 53 and a sky-high economy rate of 7.23 runs per over. While Henry is fantastic in Kiwi conditions, which offer him greater seam and swing, he is far less effective away from home, averaging 33 with the ball compared to 21 in NZ.

Gifted express paceman Lockie Ferguson, meanwhile, has laboured against Australia more than any other side, averaging 56 at an economy rate of 6.04 runs per over from his five ODIs.

Then there are NZ’s two seam-bowling all-rounders – Colin de Grandhomme and Jimmy Neesham – who between them have taken seven wickets at 50 against Australia, while bleeding 6.4 runs per over.

Fortunately for the Kiwis they also have Boult. Perhaps no other current ODI bowler has caused as much havoc against Australia as this left armer. In 11 ODIs against the Aussies he has compiled an extraordinary record of 27 wickets at 18. 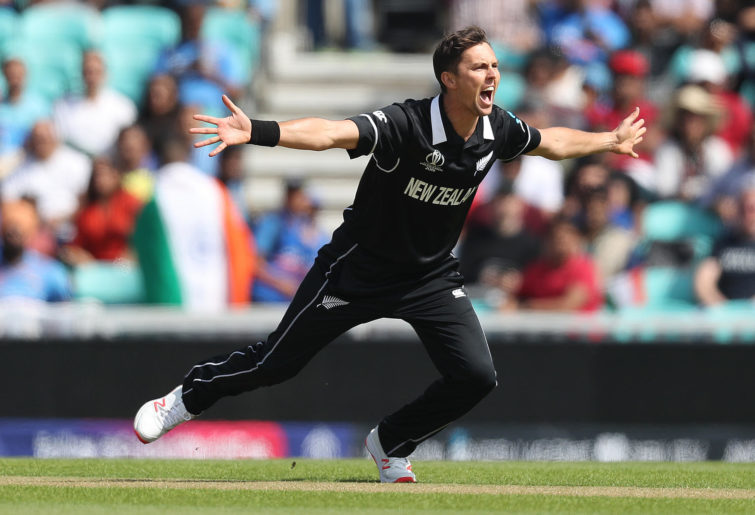 Many of the other ODI quicks ranked in the format’s top ten bowlers have under-performed against Australia. The likes of India’s Jasprit Bumrah (bowling average of 35), England’s Chris Woakes (32), Henry (32) and Ferguson (53) have had nowhere near the same success against Australia as Boult.

He is Australia’s bogey man. What has heightened Boult’s impact against the Aussies is his ability to rise to the occasion. Repeatedly he has produced his best in the big moments. Most recently he took a hat trick amid a haul of 4-51 in the blockbuster World Cup match against Australia at Lord’s. Boult helped limit Australia to a below-par 9-243 only for his side’s batsmen to let him down by crumbling for 157.

Before that, in the deciding match of the 2017 Trans-Tasman series, Australia would have cantered to victory if not for an extraordinary haul of 6-33 by Boult. After scything through Australia’s middle order he returned to ice that game, taking three wickets in eight balls just as the Aussies had got on top.

In the first match of the previous series against Australia he tore through their top six, dismissing David Warner, Glenn Maxwell and Mitch Marsh with the new ball to reduce the Aussies to 6-41.

But none of these performances are embedded in my memory like that World Cup demolition job five years ago. The favourites to win that tournament, Australia were flying after hammering England in their first match. The Kiwis were in equally commanding touch after thrashing Sri Lanka, Scotland and England in their three group matches.

The showdown with Australia in Auckland was billed as one of the biggest cricket matches ever to take place in New Zealand. The pressure on the home side was enormous. Boult, meanwhile, was a relative greenhorn, having entered the tournament with a career ODI record of 18 wickets at 35.

The Australian top order negotiated Boult easily, moving to 1-80 as the Kiwi took 0-24 from five overs with the new ball. Then Boult did something phenomenal. He returned to the attack in the 18th over, immediately dismissed Maxwell and Marsh, and went on to take 5-3 from his last five overs.

It was one of the most unexpected and skilful bursts of pace bowling in World Cup history. The heavyweights, Australia, were rolled for just 151. While NZ made hard work of the chase, as Mitchell Starc produced his own brand of magic, the Kiwis eventually secured the victory in front of an ecstatic home crowd. Boult had engineered one of the greatest moments in NZ cricket history.

That performance was the catalyst for Boult to become an elite ODI cricketer. From that match onwards he has taken 141 wickets at 23 and is now, according to the rankings, the world’s best ODI bowler.

Similar to the South African team, who consistently bring their A-game against Australia, Boult loves playing the Aussies. On that crazy day in 2015 they helped catapult him towards superstardom.