Forming an A-League team using one player from each club

It was a difficult task to make a team utilising one player from every A-League team based on their performance in the 2019-20 season so far.

It was like putting a jigsaw puzzle together, which is extremely tough.

Goalkeeper: Jamie Young
Young turned the fortunes of the Brisbane Roar around. He was the catalyst for them turning from a team languishing near the bottom of the ladder to sitting in fourth position on the A-League ladder as it stands.

Right back: Rhyan Grant
Grant works hard and plays like a right winger as his work rate is astronomical. Grant made many marauding runs forward, providing four assists and scoring one goal. 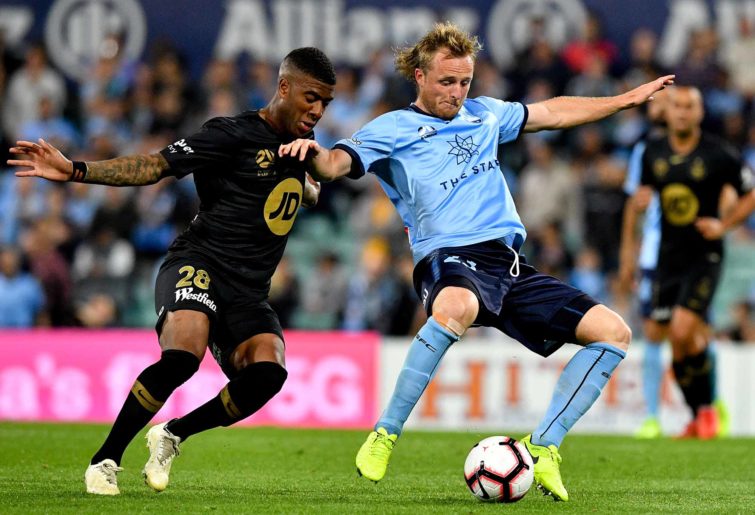 Centre back: Ruon Tongyik
Tongyik made the Central Coast Mariners look like a better team with him in it, despite not playing many games, only featuring in nine to be exact. He made a difference, even managing to score a goal.

Centre back: James Donachie
Donachie was probably the Melbourne Victory’s most important player as he is a pivotal part of the team in the centre of defence.

Left back: Liberato Cacace
He is the best left back in the A-League. He plays like a left winger and he works hard, making many marauding runs forward, scoring three goals and providing one assist. He won’t be in the A-League for much longer, as it’s only a matter of time until Cacace gets an offer to go play overseas as he has a lot of potential.

Centre midfield: Steven Ugarkovic
He has scored four goals this season, thanks mostly to the influence of the new Newcastle Jets’ coach Carl Robinson. Ugarkovic is becoming an extremely good player as he has added goals to his game. He also possesses a very good work rate and works hard without the ball.

Centre midfield: Riley McGree
He has ten goals and five assists. He is Adelaide United’s most important player as he is extremely dangerous in the final third. Despite the form of the Adelaide United team not being consistent, McGree was a consistent performer.

Attacking midfield: Diego Castro
He has four goals and seven assists. He is the Perth Glory’s most important player.

Attacking midfield: Alessandro Diamanti
He is the captain of Western United. Diamanti leads from the front. He is Western United’s most important player so far this season. As it stands he has five goals and seven assists.

Striker: Mitchell Duke
Duke top-scored for the Western Sydney Wanderers with 11 goals. He is also the captain of the team and leads by example.

Striker: Jamie Maclaren
Maclaren is the leading goal-scorer in the A-League as it stands with 18 goals and he also has four assists, which shows that he isn’t one-dimensional.