Marcus Thuram, son of 1998 World cup winner and most-capped French national team player ever Lilian Thuram, has a big future ahead of him.

Standing at 192 centimetres tall, at 22 years old he’s already a physical presence on the pitch. Born in Parma but holding French citizenship, the centre-forward started out playing for FC Sochaux-Montbeliard in the French second division. Throughout his three-year stint at the club he was in and out of the first team, putting up only two goals and one assist and seeing 43 games while there.

Marcus signed with Ligue 1 side EA Guingamp in July 2017 for €600,000 (A$1 million) with hopes of breaking into the first team at only 19 years of age. Thuram’s first year with the side brought little success, scoring three and assisting three more. In the 2018-19 season he started to improve on his previous campaigns, bagging 11 goals and one assist in all competitions. This was enough to make Borussia Monchengladbach to sign the young attacker for €9 million (A$15 million) for the 2019-20 Bundesliga season. 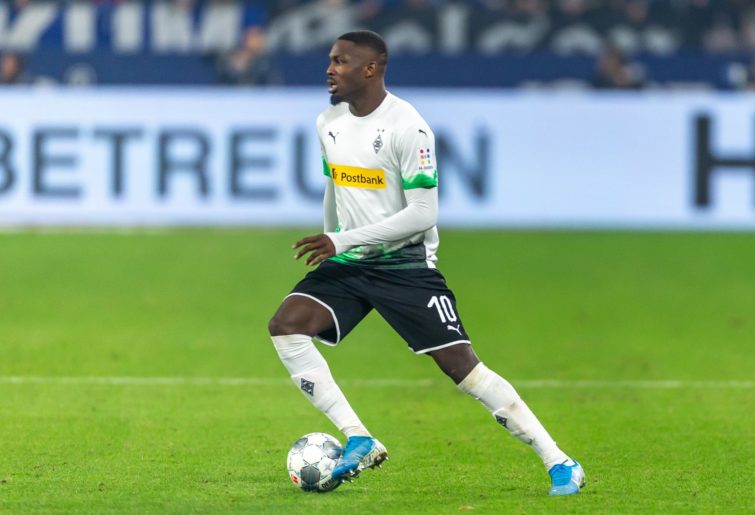 Thuram’s impact has been huge, and with the return of the Bundesliga, he only looks to keep his form. Playing either left wind or centre forward for Gladbach this season, he’s bagged seven goals and eight assists so far this season, helping put Monchengladbach third in the Bundesliga and only six points off league leaders Bayern Munich.

With a phenomenal start to his maiden Bundesliga season, Thuram won the competition’s rookie of the month and Borussia Monchengladbach player of the month three months in a row, from September to November. Thuram on the top ten Bundesliga assists list. Pair that with 78 per cent of his shots this season being on target and Thuram is a certified clinical finisher who creates chances as good as anyone else in the league.

Thuram’s combination of speed, physicality and clinical finishing just screams success in the Premier League, and here’s why.

First, the French attacker’s physicality could compete with the rough nature of any Premier League defender. Second, he has the pace to make runs behind defensive lines in either position and, third, he has the goalscoring composure to put it past the best goalkeepers in the world.

If on the wing, specifically on the left, he can cut in on that dangerous right foot to cause problems or play in a teammate with his ever-improving passing game. He’s one of the Bundesliga’s top assisters for a reason.

Thuram would fit perfectly into Wolverhampton’s squad. They play a 3-5-2, and a striking pair of Raul Jimenez and Marcus Thuram would cause havoc for almost every Premier League defence. With Jimenez having 13 goals this season and Adama Traore and Joao Moutinho both in the top ten for assists, this side could certainly make a push for the top four.

Obviously it’s early days, and I might be getting a bit ahead of myself here, but Marcus Thuram is still only 22 years of age and looking at a chance at a Bundesliga title and Champions League football next season. We haven’t seen nearly his best yet, that’s for sure.