Will
Roar Pro
12th June, 2020
9
Join the conversation
Advertisement
Write for The Roar

On a night inside an otherwise empty GMHBA Stadium – thanks to COVID-19 social distancing requirements – Geelong made a thunderous statement to the rest of the AFL, blasting to a 61-point win over Hawthorn on Friday night.

The Friday night marquee match marked midfielder Patrick Dangerfield’s 250th game of AFL footy as the #Danger250 hashtag rang out all over Twitter. However, following a seven-possession first half, Dangerfield only needed ten minutes of influence to stamp his name on the match after halftime.

Dangerfield finished with 24 possessions and one goal, yet deserved more. Being on the receiving end of a Shaun Burgoyne cheap shot face-plant just before the end of the third term lessened his impact on the match. However, by that point, the supporting cast around Dangerfield ensured that the match would be put out of reach of their greatest modern-era rivals.

The Cats kicked ten goals to one after halftime en route to the 17.6 (108) to 7.5 (47) win, as Chris Scott’s team received valuable contributions from many sources.

While Dangerfield always posed a threat around packs and contests, captain Joel Selwood amassed a game-best 28 disposals, Gary Ablett was at his evergreen best with 21 disposals and always being a threat to lay tackles as soon as his teammates lost the ball, sophomore superstar Gryan Miers kicked three goals after halftime, and Rhys Stanley dominated the ruck while Tom Stewart provided an enforcer’s role in the last line of the Cats’ rearguard. 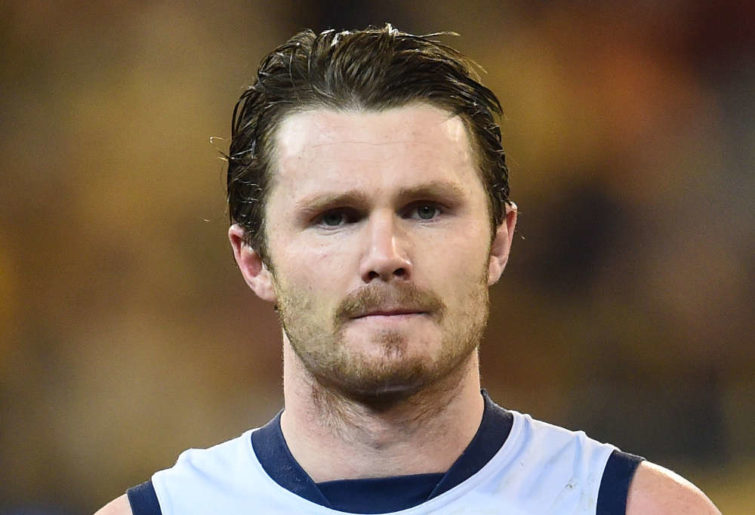 “The lockdown may have helped our older players – Ablett, [Harry] Taylor, [Tom] Hawkins, Dangerfield, Selwood – with their competitive spirit and hunger for the game being rejuvenated,” the Geelong coach said.

“Our midfield really turned it up after halftime, and the back six have shown a marked improvement.”

The result follows the Cats’ disappointing 32-point loss on the road against Greater Western Sydney in Round 1.

But in the year of 2020, where the word “unprecedented” appears to take on new contextual meanings on a regular basis, it’s not a case of a week being a long time in footy, but more like 12 weeks between Round 1 and Round 2.

It was one-way traffic after the main break, with Stanley owning hit-outs to advantage over ruck counterpart Jonathon Ceglar, with the likes of Ablett, Selwood, Mitch Duncan and Sam Menegola providing great support around Dangerfield, who was guilty of having a hot-and-cold night around the ball and in contests.

Following a one-goal advantage heading into halftime in what was an up-and-down affair to that point, Scott pulled the necessary strings to get the Cats to regroup and sufficiently dominate proceedings within the friendly confines of their home ground.

Whereas Thursday night’s return to footy match between Collingwood and Richmond at the MCG resembled a passion play in four quarters, Friday night’s affair more took on the look of the theatre of the absurd, such was the ease with which Geelong smashed the opposition.

“We saw so many players display their competitive will out there tonight, and forced themselves on the contest,” Scott said of his team’s overall effort, which often saw three and four players in blue-and-white hoops charging downfield in packs whenever Geelong took possession.

And that translated into a winning effort that looked even easier than the margin of victory itself.

Geelong take on Carlton next week at home, where they will also face the Gold Coast in Round 5, sandwiched around a trip to the MCG to face Melbourne.

Nonetheless, Scott has opted to keep a lid on the prospect of a 4-1 start before the AFL unveils the next batch of 2020 fixtures.

“We might need to see a few more games before we pass judgement,” he said.

However, as seasoned, experienced and rampant as this Geelong team is, very few teams will relish the prospect of facing them in the weeks to come. 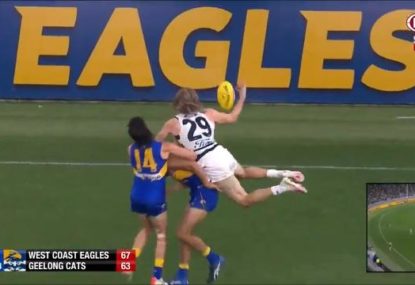