It's time the AFL fixed the advantage rule

AFL officials are constantly figuring out ways to improve the viewing of the game, which most recently has brought more attention to the ‘holding the ball’ rule.

Why does no one seem to mention the advantage rule and how poor it looks?

AFL is the only sport in the world where the umpire blows a free and then waits to see if the player will take the advantage.

The biggest problem with this is that an umpire is creating the advantage by blowing their whistle, making all the players stop, while one player runs through the pack of opposition players like they are cones.

In most instances, there is no way there would have been any advantage due to the number of opposition players around the pack.

During the Port Adelaide vs Greater Western Sydney game over the weekend, many of these advantage calls resulted in a mark inside the forward 50 or a shot on goal.

Not only does this give the team awarded the free an easy inside 50, but it also looks ridiculous to those watching the game – it reminds me of local games, when players stop competing after hearing a whistle that actually came from another oval.

There is no argument the advantage rule is important in maintaining the overall flow of a game. But if the AFL wants to keep maintaining the fast pace, why are umpires still blowing the whistle and then calling advantage?

Rugby union is one sport that the AFL could learn a lot from.

The ref’s arm goes out and calls advantage, showing that they have seen the free occur. If they play stops or there is no advantage in a short amount of time, then the free is taken back.

This small change would vastly improve viewing of AFL for fans.

If a player is caught holding the ball and it falls out of the tackle down to the opposition, no whistle needs to be blown, and there is no need for an umpire to get involved.

Is that not the point of umpires, to not get involved unless they need to?

An argument can be made that umpires constantly calling the ball back will slow down the game, but not if it is implemented correctly. If a player is tackled high in a contested situation, an umpire could wait five seconds to see if there is a clear advantage and if not, call the free back.

Five seconds gives enough time to see if there is an advantage, while not slowing down the pace of play if it is called back.

The current advantage rule needs to change, as we cannot have players stopping in the middle of a game to look at an umpire.

The AFL needs to learn from other sports – something as simple as not blowing a whistle will greatly improve the look of our great game.

I’ll admit that I found it quite challenging to well and truly immerse myself in the 2020 AFL season.

With a forward line as potent as the one boasted by the T team, there would be plenty of shootouts. 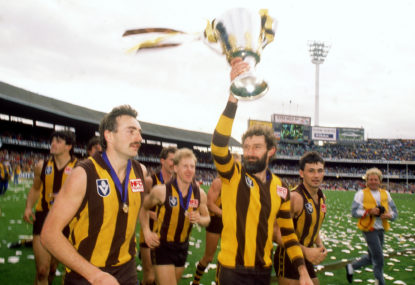