At a time when everyone was stir-crazy from being stuck at home, the Tiktok debacle threatened to snowball into another season-derailing controversy, following the ‘home videos’ the Penrith boys filmed in 2019.

Three months later, the Panthers have emerged as a genuine premiership threat – thanks in no small part to the coming-of-age of their prodigious halfback. The importance of Cleary to his team can be seen in his second-half performance in Round 10 against the Cowboys.

Kicking off from the unfamiliar position of odds-on favourite, the team from the foot of the mountains found themselves down by six shortly after halftime and wobbling precariously. The cellar-dwelling Cowboys had struck twice through quick incisive middle plays, including a try of the season candidate via the ultra-impressive Hamiso Tabuai-Fidow.

Penrith, who had suffered a slate of in-game injuries, seemed to be choking away a gimme chance to go top of the table. In the words of former Panthers overlord Phil Gould on Channel Nine’s telecast, they’d “worn a three-piece suit to a street fight”.

Then in the space of two minutes – Cleary killed the Cowboys off. First he laid on the levelling try, with a sharp slow-fast tempo change near the line creating space out wide for Brent Naden to score. The following set, Cleary charged out of the line on tackle one to produce a hit which would’ve prompted Darryl Eastlake to ‘get the old ears bleeding’.

Then from marker, he served up another one – this time jolting the ball out of the arms of Maroons forward Coen Hess. As much as the shot was Cleary’s lairy shove on Hess afterwards indicative of confident swagger.

Penrith had a makeshift fullback in Stephen Crichton, an odd-couple centre duo of Billy Burns and Tyrone May and Api Koroisau playing with one arm – but the son of Ivan needed little support. When a pinpoint grubber pulled up near Penrith’s dead-ball line, he jumped into acting fullback, beat two defenders and escaped to the field of play after a dropout had seemed inevitable.

A solo try right on full-time (followed metronomically by another conversion from out wide) capped off possibly Cleary’s best NRL performance to date. 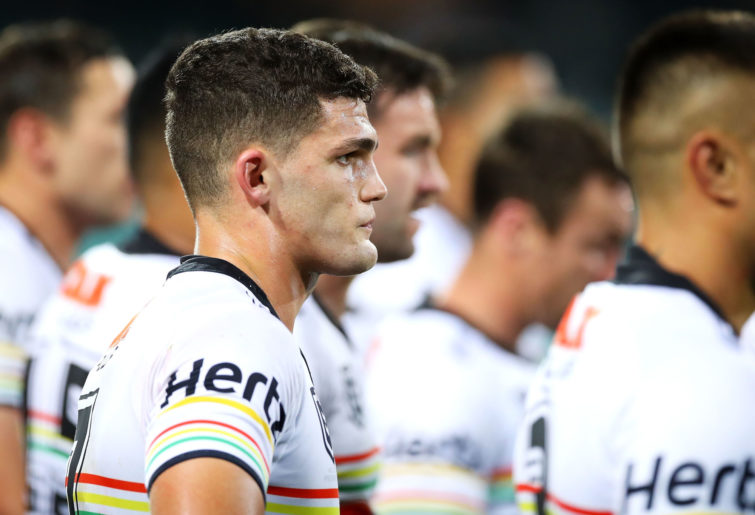 It’s easy to forget Nathan Cleary is only 22. He’s been a walk-up starter for Penrith since 2016 and Blues halfback for two years. 2019 was a disastrous season though for the Panthers, during which a pre-season scandal generated monstrous waves of unrest among the playing group, and Cleary said he “learned a lot about himself”.

The bigger issue for Nathan’s game though, was James Maloney. The two-time premiership winner had only been signed to ‘make the best of a bad situation’ via wantaway Matt Moylan.

I wanted to believe Phil Gould was a tactical genius – the wily master Maloney would enlighten the apprentice Nathan, imbue him with the ancient formula for premiership victory. In reality though, the games of both men were far too similar. Both are natural game managers, but as the decorated senior player, Maloney rightfully outranked Cleary.

This showed in their season try-assist tallies, with Maloney’s 18 doubling Cleary’s nine. While Maloney was in the team, Cleary would only ever drive from the passenger seat.

Now, with five kilos added to his frame since he played navigator for ‘Jimmy wins’, Cleary 2.0 has a bigger influence on his team in more ways than one. With injuries forcing key attacking duo Api Koroisau and Dylan Edwards off the park for a hazy period of time, Cleary’s updated hardware will face a heightened challenge.

Replacements Mitch Kenny and Caleb Aekins are decent and enthusiastic, but the burden will fall heavily on Cleary to create points. Tricky games against resurgent Manly and Canberra follow the Titans, and when you’re top of the table no one takes you lightly.

Cleary’s output in the coming month will dictate whether his team can consolidate at the pointy end, or start to slide under the weight of expectation.

Penrith have beaten Canberra 28-12 to match the club’s record of eight straight wins, again proving they are the real deal in the NRL in 2020. Penrith matched the feats of club royalty after a half-hour hit-and-run on Canberra set up a 28-12 domination. In what shaped as another acid test of the Panthers’ premiership […]

Lucky he wears a helmet! 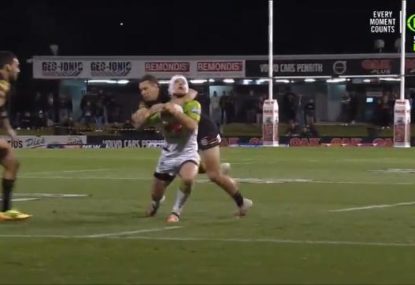