It’s a boost to the Finn’s beleaguered championship campaign, with Bottas sitting 30 points behind his teammate, Lewis Hamilton, who missed out on pole by just 0.063 seconds.

There’s been plenty going on off-track too after it was announced on Friday that Racing Point had been found guilty of copying the brake ducts from last year’s Mercedes W10. They have been fined €400,000 ($659,576) and have had 15 constructors’ points docked.

This case is not closed, and we will be hearing plenty more about it in the coming weeks.

On Thursday July 30, Nico Hulkenberg was sat in a café in Cologne having a pastry and a coffee when he received a phone call from Racing Point Team Principal Otmar Szafnauer requesting his services at the British Grand Prix as the replacement for Sergio Perez, who had tested positive for COVID-19.

Now, on Saturday August 8, Nico Hulkenberg has had his best qualifying at Silverstone and will start third on the grid tomorrow.

Here’s hoping that the Hulk has a better Sunday this time around than he did last week. He will have a fight on his hands, having not been able to complete a full grand prix, but it’s shaping up to be a good race for Hulkenberg.

Behind him comes Max Verstappen, starting fourth with Red Bull taking an alternative strategy and choosing to start on the hard tyre while those around the Dutchman have opted to start on the mediums. Daniel Ricciardo rounds out the top five.

It’s going to be interesting to see how the teams approach their strategies after the tyre delaminations of last week. The two-stop looks to be an option that many will take as the tyre compounds are one step softer than those used last week.

Whilst safety car periods may alter some strategies, hopefully all teams are clear as to what happens when the tyres are pushed to their limits in terms of durability.

Ferrari continue to be in strife. Charles Leclerc could only qualify in eighth, while Sebastian Vettel was knocked out of Q2 and will start 12th tomorrow. 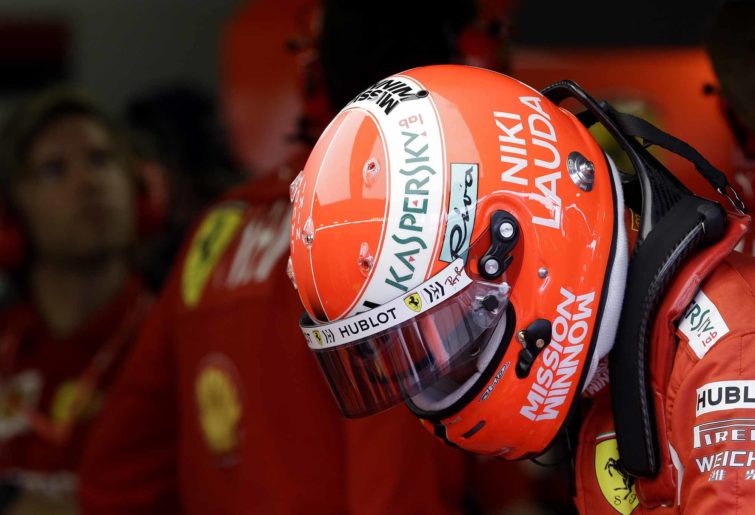 You cannot sugarcoat how poor Ferrari are at the moment.

It is not entirely clear why Vettel was off Leclerc’s pace, but it is definitely clear that it will be another difficult afternoon for the Scuderia tomorrow. A double-points finish is the best they can hope for.

It’s not a great position for a team like Ferrari to be in, a team who have taken 11 pole positions at Silverstone, a record they jointly hold with Williams.

Williams also haven’t been going through the best of times recently, but things are on the up with George Russell getting into Q2 for the fourth consecutive race weekend.

Russell is confident that Williams have improved their race pace enough for them to put in decent performances on Sunday afternoons, just like they do on Saturday afternoons.

Even if they’re not scoring points just yet, it’s still pleasing to see Williams continue to improve, having hit rock bottom last season.

Apart from Mercedes locking out the front row once again, it’s a mixed-up grid for the 70th Anniversary Grand Prix. The Ferraris and the McLarens are out of position on the grid, while the potential for a battle between Nico Hulkenberg, Max Verstappen and Daniel Ricciardo looks tantalising.

There’s plenty of jostling for position to be expected in a race that gets going at 11:10 pm (AEST).

Six-times world champion Lewis Hamilton has taken his tally of Formula One wins to 90 and is now on the brink of equalling Michael Schumacher’s record.

Another pretty decent race, at least behind the Mercedes, and we’re back for another talking points from another grand prix. Let’s get to it.

A chaotic first ever Formula One grand prix at Mugello saw Lewis Hamilton take his 90th career win from teammate Valtteri Bottas and Red Bull’s Alex Albon, amid two red flag stoppages and almost half the field out of the race.

Ferrari suffered one of its worst results on home soil at the Italian Grand Prix at Monza, as both Sebastian Vettel and Charles Leclerc failed to reach the chequered flag in a season where the Scuderia’s struggle continues to get worse.