While I was trying to get a few hours of sleep before waking up for the Champions League quarter-finals, I decided to scroll through Instagram one last time before calling it curtains for the night.

As an ode to an underrated gem for India’s limited-overs sides, I wanted to look back at five of his finest innings as an Indian player.

34 off 28 vs Australia, Sardar Patel Stadium, Ahmedabad, 2011
Facing defending champions Australia in the 2011 Cricket World Cup Quarter-final, the pressure was on hosts India to crank it up in Ahmedabad.

Batting first, a Ricky Ponting century (104 off 118) see Australia post 6-260 in their quota of 50 overs. Although slightly under-par, the Aussies feel confident with runs on the board in a pressure game.

With half-centuries from Sachin Tendulkar (53 off 68) and Gautam Gambhir (50 off 64), India seems to be in a comfortable position at 2-143. But this is Ricky Ponting’s Australia.

They don’t give up. By the 38th over, India are 5-187, and with a longish tail, Suresh Raina trots to the crease with the Indians sliding towards defeat.

Taking a few balls to get his eye in, Raina pulls Brett Lee through midwicket for a boundary in the 40th over. With Raina and Yuvraj Singh (57 off 65) scoring 14 runs in the 40th over, the Ahmedabad crowd starts to find its voice again.

With the required run-rate below six, Yuvraj and Raina knock the ball around for singles with the odd boundary. With 22 runs required off five overs, Raina decides to attack Lee and Mitch Johnson as India raced to a five-wicket victory in the 48th over, knocking out four-time champions Australia.

Although Yuvraj Singh received player of the match, Raina played an underrated innings. With India 5-187, they were one wicket away from the tail being exposed. But Raina’s calmness under pressure ensured he and Yuvraj would take India home comfortably.

36 off 39 vs Pakistan, PCA Stadium, Mohali, 2011
India vs Pakistan is big enough no matter when it’s being held. Add a World Cup semi-final to it, and the pressure on the players is undeniably off the charts. Batting first, India race off to 1-100 at a run-rate over six. But this is India vs Pakistan.

One team will not dominate for the full 100 overs. Pakistan fight back, and when Sachin Tendulkar (85 off 115) departs, India are in slight trouble at 5-187 as Suresh Raina walks in at number seven.

Batting very watchfully against the Pakistani spin twins of Saeed Ajmal and Shahid Afridi, Raina grinds to 10 off 16 before MS Dhoni (17 off 30) is trapped leg-before. Unlike the quarter-final against Australia, Raina is stuck to bat with the tail for the remainder of the innings for the semi-final clash. Rather than slogging India out of trouble, he continues to stick around.

Grinding to 14 off 25, Raina cuts loose in the 46th over, hitting a few boundaries off Umar Gul. With the Indian tail facing most of the deliveries in the final overs, Raina tries to take advantage of the small percentage of deliveries he faces in the death overs. Finishing 36 off 39 not out, India post 9-260 after 50 overs.

India would end up winning the semi-final by 29 runs, and Raina played a vital role in the victory. By batting till the end, he had ensured the Indian bowlers had a defendable total to play around with. Although this wasn’t a half-century, those 36 runs were like gold to the Indian team.

65 off 57 vs Bangladesh, MCG, Melbourne, 2015
Facing underdogs Bangladesh in the 2015 Cricket World Cup quarter-final, India elects to bat first. But some brilliant captaincy sees India in strife at 3-115 after 28 overs. As Suresh Raina walks in at number five, a repeat of the 2007 World Cup upset is on the cards unless India posts a respectable score.

Raina starts very slowly, struggling to rotate the strike to the in-form Rohit Sharma. With India 3-155 at the batting powerplay and Raina 13 off 25, it’s make or break for the Indian side. In the batting powerplay, Raina goes nuts. Taking on the Bangladesh attack, he takes advantage of the MCG dimensions with quick single and twos alongside the odd boundary here and there.

Reaching his half-century off 46 balls, Raina continues to attack before departing for a well-made 65. His innings deflates the Bangladesh side as India romp to 6-302 and a 109 run victory. While Rohit Sharma scored a magnificent 137, Raina’s innings gave India the momentum it needed to dig themselves out of trouble. Once again, the man from Uttar Pradesh showed his class in a big game.

100 off 75 vs England, SWALEC Stadium, Cardiff, 2014
As both India and England were experimenting leading up to the 2015 Cricket World Cup, the two sides faced each other in a bilateral series. In the second ODI in Cardiff, India find themselves 3-110 in the 24th over as Suresh Raina walks into the crease.

Raina starts well, racing off to a run-a-ball 14 before Rohit Sharma (52 off 87) holes out soon after. Rotating the strike well, Raina finds himself well set at 34 off 41 with the batting powerplay set to begin in the 36th over. Taking full advantage of it, India scored 62 runs in the batting powerplay, with Raina tonking the English bowlers around the park for fun.

Reaching his fifty off 49 deliveries, Raina would shift into sixth gear as he reached his 4th ODI hundred in 74 deliveries before being dismissed in his next ball.

In what was a breathtaking innings to watch, Raina single-handedly bossed the Indian innings as the Indians posted 6-304. England would never see themselves in control of a shortened run-chase to rain (295 off 47 overs), as the Poms were bowled out for 161. 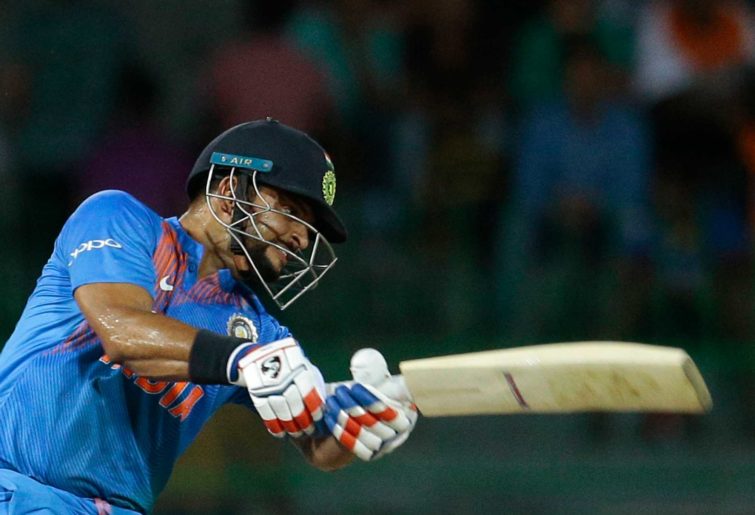 101 off 60 vs South Africa, Darren Sammy National Stadium, Gros Islet, 2010
In the 2010 T20 World Cup, India faced off South Africa in a Group C clash. Batting first, India lost Murali Vijay for a golden duck in the first over. Enter Suresh Raina at first drop. Raina is caught at mid-off for five, but a no-ball saves him from walking back to the sheds. Taking 15 balls to hit his first boundary, Raina slowly starts to get a groove.

Alongside Yuvraj Singh (37 off 30), the pair put on 88 for the 3rd wicket as Raina reaches his half-century off 42 balls. From there on, Raina goes nuts. Taking a liking for Rory Klenvieldt at the death overs, Raina slogs the South African seamer all over Gros Islet as he reached his maiden T20I hundred off 59 deliveries before departing the next ball. As India posted 5-186 courtesy of Raina’s ton, they would defeat the Proteas by 14 runs.

Before this innings, Raina’s T20I average was below 20, and his T20I strike-rate was below 120. Not only had his stats gone up, Raina became the first Indian to score an international century in all formats.

The word passion comes to my mind whenever Suresh Raina’s name is mentioned. An excellent runner between the wickets, Raina was part of India’s golden generation in the mid-2000s to early 2010s. If India took a wicket, Raina would be the first to run up to the bowler and hug him for what seemed hours on end.

If his batting partner reached a ton, he’d celebrate before his partner. A selfless cricketer who always put the team first, Suresh Raina had an outstanding career for India in limited-overs cricket.

What happens next is unknown. I’d love to see Raina make some cash through the T20 leagues, but that would mean sacrificing the IPL (unless the BCCI changes its stance on Indian players in foreign T20 leagues).

Leaving the international arena with 7988 runs, 62 wickets and 167 catches across all formats, Suresh Raina will be one name that will be remembered across Indian fans for years to come.