The Tracker: Ball-watching analysis from the re-start to August 8

An admirable 20 matches were played in this short period of twenty days. The break in the season and then the staggered re-start for some teams meant an unconventional draw.

Teams played varying amounts of games. It was impossible to draw comparisons about failures to track by individuals, or patterns of this error by teams. Below is an analysis of the 59 goals scored during this period. Ball watching accounted for 32 per cent of goals, focused defence 56 per cent, and penalties just 12 per cent.

Focused defence and admirable tracking to try to prevent goals was shown by Newcastle’s Matthew Millar when Anthony Caceres scored for Sydney, and by Leigh Broxham of Melbourne Victory on Scott McDonald’s header for Brisbane Roar.

Jonathan Aspropotamitis for Western United also showed excellent thinking and tracking skills when Tass Mourdoukoutas scored with an unexpected but exquisite back heel for Western Sydney Wanderers. After that match Western United coach Mark Rudan was not referring to Aspropotamitis when he called out his defenders for not staying with attacking players that they had picked up.

Rudan had wanted his team to set up man-for-man in the box and not mark zones. It was disappointing to Rudan that his players did not follow the plan that had been determined before the match.

Disappointment for the same reason was also expressed by Ufuk Talay when his team Wellington Phoenix allowed the only goal of the game to Besart Berisha of Western United in the first game of the season. Talay said then that it was disappointing to concede the goal because two players were marking space and that you can’t do that in the box as you need to pick up players.

The comments of the two coaches, made ten months apart, show that ball watching is guarded against, and that tight marking is planned for penalty box situations. However, players still struggle to follow these plans, although perhaps not quite to the same extent as earlier in the season.

Before the break in the season, this analysis showed ball watching was implicated in 42 per cent of all the goals scored. Players deserve credit with improvement in this aspect of defending because in this group of twenty matches since the resumption, that figure has reduced to 32 per cent.

Will there be even greater improvement in the coming weeks?

Fixtures are coming through thick and fast and there are some fun games this weekend in the Premier League.

Tributes pour in for Diego Maradona after football legend's death

The football world is in mourning following the passing of Argentinian legend Diego Maradona. 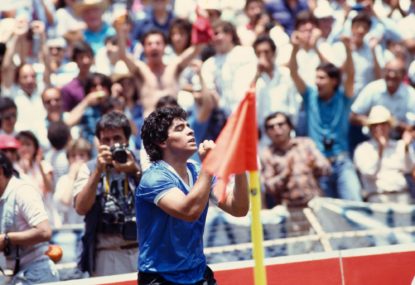 Tributes pour in for Diego Maradona after football legend's death