When I saw the print in the hyped Bob Murphy book, my heart sank and I thought, “Oh Bob, no”.

“We draped a cape around his neck and asked him to draw on all his talents. He would ultimately connect the Western Bulldogs Football Club to itself … We are all prospecting in our journey through life, and the day we met Bob Murphy, we struck gold .. Off he rolls in his flannel, and on you both rock. Enjoy the ride! Luke Beveridge.”

What a mind, and I’m not talking about the guy on Fox Footy.

The less rabid sports wonderers ended up looking at late-era Arsene Wenger with curiosity. He kept trying to make Arsenal succeed in his way and no-one else’s and year after year was puzzled and almost wistfully sad as his vision proved faulty for more than a decade.

I didn’t think it was possible for such a figure to emerge in footy, but Beveridge, with tenure as the only living Bulldogs premiership coach, continues chasing a certain perfection and vision that maybe exists only in his mind.

In Martin Flanagan’s chronicle of 2016 he discusses Beveridge’s critiques as the Bulldogs won an emotional walk-off against Sydney with Jason Johannisen’s goal on the siren.

The forlorn comeback against St Kilda this week only added to Beveridge’s mystery. The Dogs were average and this project is flawed and doomed, but wait! Could the Dogs play like those last minutes all the time, could his vision one day come true? Am I missing something? Or is my conventional thinking telling me that his vision of a successful team is way off?

August 2019 made me question myself: did he know what he was doing the whole time? Then he selected third-gamer Rhylee West to be delivered to the tender mercies of the GWS hatchet job and my doubts began again, and the Beveridge enigma continued.

And yet Beveridge is in fact the only Bulldogs coach who did not end his project empty-handed. The answer of course is that, yes, it did all come together, the miracle of September 2016. A structureless team – albeit with a good, structured defence – somehow won a premiership. Maybe to Beveridge they were on track to replicate Holland’s whirlwind ‘total football’ (soccer) of the 1970s, where everyone emerges in any position at any moment.

This in recent years has involved, among myriad other cases, terrific defenders Hayden Crozier and Bailey Williams playing as forwards and my guy, the prolific, inspirational, does-it-all Josh Dunkley wasted as an odd ruck-forward, which when shifted from the midfield was coincidentally the moment Geelong began to come back from 37 points down this year.

The Dogs’ premiership 22 is revered. Outside the walls, we’ll never really know if Beveridge purposely dismantled it or if injuries and demographics just worked against that team. Definitely he approached season 2017 with his understanding that they still weren’t good enough despite the flag. Fans like me would have preferred a young group who had put credits on the board to be given deserved grace time to get over the teething problems of being young champions, rather than Beveridge’s start-from-zero attitude.

The premiership team had one more year together, 2017, but flubbed it. By 2018 it was already the new generation of Aaron Naughton, Ed Richards, eventually Bailey Smith. 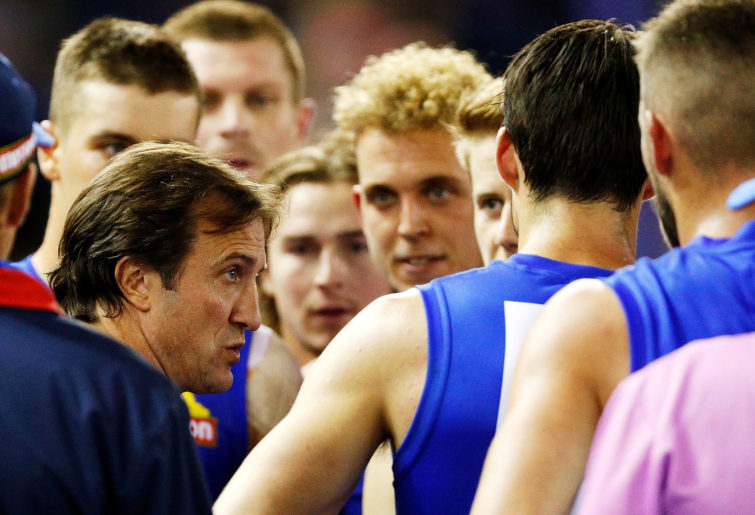 Beyond the lost BullGods, as the grand final banner mentioned, is team structure.

After Saturday’s loss I texted a mate: “I can’t put my finger on the Dogs, no structure or forwards or talls or strength or whatever. St Kilda just had to keep the ball in the air and we were gone. (Note: we inexplicably also did that to ourselves with long bombs.) St Kilda were good but pretty naïve, if we were any good we’d have beaten them.”

In my five-a-side soccer experience I eventually learnt to ‘see’ bad team structure. Often ours collapsed when I was a forward as I was not skilled enough to create my own chances on goal.

At minimum a team has to have a forward who can penetrate or at least work as a focus and a fulcrum around which the rest of the attack can function. Otherwise it just devolves into the sort of mushy mess of the Bulldogs-Carlton game, where a team that won inside 50s 53-41 was thrashed by 52 points on basic breakaway goals that St Kilda also did well.

Naughton could be this guy but has regressed a tad this year. It really showed what an indispensable pillar of the miracle Tory Dickson was as the team’s only functional forward in September 2016, who retired this week without anyone noticing.

The Roar’s Jay Croucher has written: “They may or may not have the right coach to trigger a run. Luke Beveridge loomed as the natural successor to Alastair Clarkson after 2016 in the hierarchy of elite coaches but instead has dissolved into an uncomfortable second act, replacing historic brilliance with strange, indie choices.”

Beveridge is a fascinating but not expansive character. Even the moment watching the cup being hoisted provoked a dour frowny smile. That same week he mentioned, “I’m ecstatic. I may not look it, but I feel it,” which made the journos laugh.

What is that intriguing faith of his as coach that won C-grade, then B-grade, then A-grade premierships in succession, then with the Bulldogs, all unprecedented? He won AFL coach of the year in his first two years as coach, and since 2016 his press conferences have usually been a sad puzzlement that this caper, this match, this season isn’t working quite as he thought it would.

That faith allows youngsters to shine but isn’t extended to winning premierships. What did happen to Luke Dahlhaus, Jordan Roughead, Shane Biggs for them to believe that this Western Bulldogs thing wasn’t for them anymore? The Roar’s Josh Elliott summarised: “We’ve seen that Beveridge can coach young and inexperienced sides to play maverick footy and punch above their weight. But how about instead turn 22 into one that’s mature and consistent? That’s what I’d like to see.”

The remaining premiership dudes often astonish me with their clever moves, but the Dogs on a deeper level are not a great team. Their top-eight record was 1-7, including several complete thrashings. Finals found the fault lines, as always.

Is our mysterious coach part of the problem or frantically trying to get his finger on it himself? This week pre-game he looked like he was as fascinated by the puzzle as the rest of us. But of course I would not move on from the coach who was part of the legend. How could we? We are not Hawthorn, who only asks what you did today. I always complain, but I must be grateful too. Maybe he’s a genius, maybe his fragile vision will all piece together for another month or so again.

Off he rolls with his surfboard, and on we all rock.

Western Bulldogs boffins spent a long time after the devastating finals exit contemplating their next roster moves to get up the ladder four seasons after winning the club’s first flag of the AFL era.

It is not surprising when you look at the number of games that the leading game player at the two fledgling clubs – Gold Coast and Greater Western Sydney – have played and discover that it is less than 200.