Despite crashing out of his maiden IndyCar race at the Grand Prix of St Petersburg before reaching half-race distance, Scott McLaughlin described his open-wheel race debut as “the best day of my life apart from my wedding.”

Who can blame the 27-year old Kiwi? He now embarks upon a new racing journey in 2021 in the fierce IndyCar championship, driving for the most prestigious and celebrated outfits in Team Penske.

Though as much as it is exciting to see a talent such as McLaughlin recognised on the world stage and given the opportunity to test his might against the likes of Josef Newgarden, Simon Pagenaud, Will Power and the recently crowned six-time champ Scott Dixon – there is a
bittersweet feeling in the young Kiwi’s departure from Supercars.

Bittersweet because while seeing him race against the aforementioned names and embrace a new challenge is good, it is a bit sad to not see him continue his dominance in the Supercars championship and chase further records. McLaughlin himself has stated that he has no plans to return to Australia.

“I plan on trying to forge a career here and then see what happens,” the three-time Supercars champion said.

It feels like only yesterday that he made his debut at the Sandown 500 in 2012 as co-driver to Jonathon Webb at Tekno Autosports, before bursting onto the scene full-time with Garry Rogers Motorsport a year later.

That first win on home soil at Pukekohe in 2013, where he’d have watched his idol and compatriot Greg Murphy reign, was the beginning of something that all knew would be special. Not every day does the commentary team liken a 19-year old to the great Craig Lowndes.

GRM’s transition to the Volvo S60 in 2014 really made McLaughlin a household name, or rather he made Volvo a household name. There were many pole positions and race-winning performances, though never quite the consistency in the car to mount a challenge to the Red Bull and Tickford heavyweights.

But when it was announced in 2016 that McLaughlin would be joining the burgeoning DJR Team Penske outfit, after the IndyCar giant bought out a majority stake in the fledgeling Queensland-based team – the feeling was that a championship would be close.

Forging a key partnership with engineer Ludo Lacroix, as he did with Richard Holloway at GRM, unlocked a new dimension to McLaughlin’s racing and there was a newfound consistency which propelled the Shell V-Power Racing Team to their first team’s title in 2017.

The driver’s championship sadly slipped through the Kiwi’s hands at the final event in Newcastle, which among the Bathurst heartbreaks at Volvo – stands perhaps as McLaughlin’s lowest moment in his young career.

Where most may throw their hands in the air and never recover to succeed, the crash with Lowndes at Newcastle and losing the title to seven-time champion Jamie Whincup was the catalyst to what we saw for the next three seasons.

Unbridled dominance in qualifying and then converting those countless pole positions to race victories. With the odds stacked against him too, between racing an outdated Ford Falcon FG X in 2018 against the new Holden Commodore ZB – to the acrimony surrounding the aerodynamic proficiency of the Ford Mustang in 2019.

All the fallout from the Bathurst 1000 too that year, which McLaughlin won with his long-time teammate and co-driver since GRM in Alex Prémat, is something that many will forever see as tarnished. Perhaps a contributor to Penske’s confirmed withdrawal from Supercars too, with the racing empire disappointed with a tainted result and the ridiculousness of the Mustang parity debate.

This is why 2020’s championship win is what best defines McLaughlin’s legacy in Supercars, and hopefully one day he may decide to return to the series as did Lowndes and Marcos Ambrose to varying degrees of success. Amongst all the adversity from his rivals and the ongoing impacts of a global pandemic, with a car that was now in parity terms equal with the Commodore – McLaughlin blew the competition away with 13 wins, 15 pole positions and won the championship with a round to spare.

Winning a third Barry Sheene Medal too this season for being the best and fairest shows why Penske holds the once-larrikin kid who plucked it into first and gave it some jandal in such high regard, comparing the Kiwi to IndyCar legend Rick Mears as well as trusting McLaughlin enough to run a fourth car in his IndyCar operation full-time.

Returning to the bittersweet feeling, among all the adversity and acrimony that McLaughlin and his Shell V-Power team have faced over the last four seasons, the hope is that his achievements aren’t simply forgotten in Supercars. Despite being only 27, what he’s already accomplished does warrant legend status.

Sitting equal on three championships with the likes of Lowndes and a certain Peter Brock isn’t some easy feat. And while we’ll be cheering for McLaughlin in the #3 Shell V-Power Dallara IndyCar in 2021, he leaves behind quite the Supercars legacy in such a young career.

For only the second time in his career, Jack Miller is a MotoGP champion. 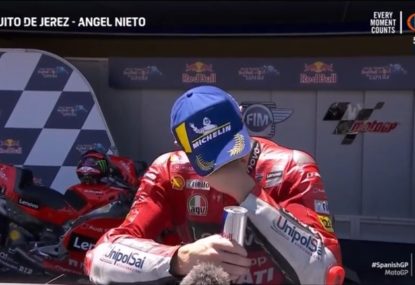