Following the excitement of one of the most pulsating Test series of all time, the aftermath is a feeling of withdrawal. What could possibly top that Border-Gavaskar Trophy series? The short answer: probably nothing.

The cricket caravan rolls on, with Australia heading to South Africa, and a return to the place of 2018 infamy, while the battered and bruised but astonishingly victorious India head back home to play England, no doubt hoping that their feet can touch the ground.

Dwelling for a moment on the just-completed series, the following is my individual player rankings for the series in the more standard way with scores out of ten. I will include only players who played two or more Tests.

Rishabh Pant: 9/10
This swashbuckler sealed the deal in Brisbane and almost managed the same in Sydney. With a dazzling array of strokes and boldness in deploying them even in the tensest and trying of circumstances, Pant lit up Australian stadiums this summer.

Also of note was his ability to knuckle down and pace his innings in Brisbane, hitherto a trait that has not been on display. While his keeping was not perfect, it may be that he plays simply as a specialist batsman, although that will have implications for India’s preference for five bowlers.

Ajinkya Rahane: 8.5/10
Rahane’s lead from the front century in Melbourne propelled India to victory, and while his other scores were not quite in the same league, they were nonetheless important for momentum. It is for his peerless captaincy that Rahane stands out. Calm, unifying, bold, determined, humble and astute are the sentiments that clearly spring to mind. Elevating Pant in the batting order almost led to victory in Sydney and clearly did so in Brisbane.

Shubman Gill: 8/10
What a find this 21-year-old is. To hear the crispness of ball pinging off the bat with a scorching cover drive is one of the game’s most beautiful sounds. While unfortunately not registering his maiden ton, that cannot be far off for this aesthetically pleasing youngster. Gill was unfazed by the reputation of the Australian bowling attack, and his future is ever so bright.

Jasprit Bumrah: 8/10
He was hostile, accurate and showed the ability to trouble all Australian batsmen with his awkward trajectory and movement. It is incredible that Bumrah is yet to debut on home soil. Jasprit also demonstrated great poise in leading the attack. 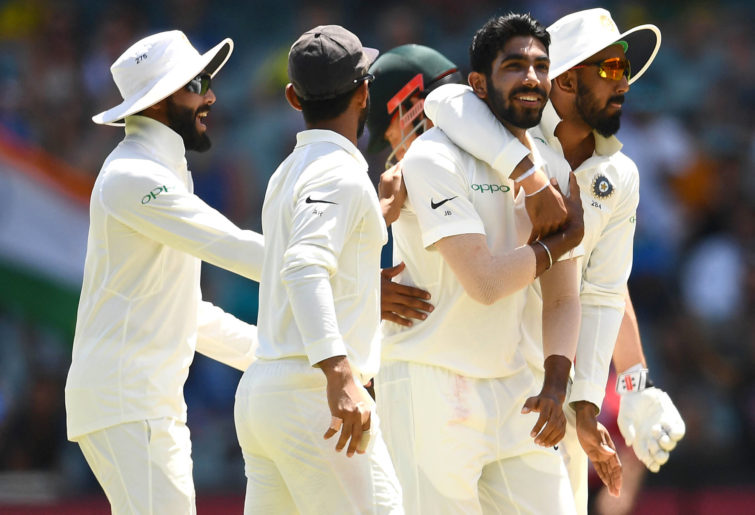 Cheteshwar Pujara: 7.5/10
This man’s stubborn, obdurate and courageous play was never more to the fore than at the Gabba and the SCG. While not making the big runs of the last tour, nonetheless his contributions were immeasurable.

Ravindra Jadeja: 7.5/10
Described as a rock star, Jadeja lived up to his premier billing. A decisive half-century in Melbourne steadied the ship initially along with his skipper, and then gave India a decisive advantage. His bowling was incisive and fielding, as always, outstanding, most notably in the run-out of Steve Smith in Australia’s first innings in Sydney.

Mohammed Siraj: 7/10
Making his debut, leading the pace attack in the final test, and confronting personal tragedy, this was an outstanding maiden series. Combining good pace with seam movement, Siraj troubled Australia’s top-order batsmen, culminating in a richly-deserved five-wicket haul. He will be difficult to displace, even when the full contingent of pace bowlers are available.

Ravichandran Ashwin: 7/10
Ashwin had his best series down under. With greater flight than previously, he managed to impose himself on the series, and to take Smith’s wicket more than once. Who could forget his back to the wall batting effort in Sydney?

Hanuma Vihari: 6/10
Vihari’s outstanding rearguard batting in the epic Sydney Test alone gave him this rating. It was a fine response to an otherwise below-average tour. Vihari’s place in the team, like Mayank Agarwal’s, could well be in jeopardy looking ahead.

Umesh Yadav: 5/10
Before injury struck, Yadav performed solidly, picking up some key wickets in the Adelaide Test. However, at 33 years of age, and with the return of Mohammed Shami, and the unearthing of some exciting young pace prospects, Yadav’s place in the team is far from secure.

Rohit Sharma: 5/10
A series of what could have been for Rohit Sharma. As always, Sharma looked the goods and gave India solid starts, however his propensity to throw away his hand when right on top detracted from his performance.

Mayank Agarwal: 4/10
A somewhat disappointing series for Mayank Agarwal. After not delivering in the opening slot, Agarwal’s middle-order performance looked promising in the first innings at the Gabba, only to be thrown away with a loose shot outside the off-stump. His limp drive in the second innings at the Gabba, after he earnt a reprieve through DRS from the previous ball, could have been fatal.

Navdeep Saini: 4/10
Hard to judge, given that Saini spent most of the Brisbane Test injured. He picked up a couple of wickets in Sydney and bowled with pace, and his overall performance was certainly an improvement on his ODI form.

Pat Cummins: 9/10
Simply an outstanding series for the aptly-awarded man of the series. Hostility, guile and determination all came together, and he was consistently the go-to man for the skipper, right up until the final overs of the series in Brisbane.

Marnus Labuschagne: 8/10
Cementing his spot as Australia’s long-term number three, Labuschagne was able to negotiate pace and spin alike. Labuschagne had a consistent series, highlighted by a century in Brisbane and a 90 in Sydney. Luck was also on his side, having been dropped numerous times through sloppy fielding, but one makes their own luck in this game.

Steve Smith: 7.5/10
While not quite living up to his stellar standards, Smith imposed himself on the series, especially in Sydney, with an outstanding first-innings century and a near-century in the second innings, followed by solid contributions in Brisbane. His run of low scores in the first two Tests were a blip on the radar.

Josh Hazlewood: 7.5/10
Hazlewood had a fine, consistent series, and his performance in the Adelaide rout was superb. Definitely a bowler that India were very wary of, he remains a vital cog of this attack.

Cameron Green: 5.5/10
A solid debut, realising his maiden Test half-century and going close on a few other occasions. He does appear to be leaden-footed early on – a technical issue that needs to be looked at. Green’s bowling was promising and he was a bit unfortunate not to pick up his first Test wicket. A work in progress, but overshadowed by India’s youngsters.

Mitchell Starc: 5/10
Starc bowled with venom in bursts, however, this was not a memorable series for the Aussie quick. He lacked consistency and some of his erratic old ways appeared again, when he was particularly costly in Brisbane.
Also missing was his sand shoe-crusher yorkers.

Nathan Lyon: 5/10
Despite the moniker of the GOAT and all the fanfare of Lyon reaching his 100th Test and possible 400th wicket, Lyon, not for the first time, failed to seal the deal in a final innings. Bowled steadily without much variety or guile. He was not helped by missed chances.

Tim Paine: 4.5/10
The temptation is to mark the Australian skipper harsher than this, given his lack of imagination in captaincy, muffed chances (especially in Sydney), and needless and childish sledging which won him and his team no favours. However, Paine batted solidly and his performance possibly needs to be judged against what is probably too much of a workload combining ‘keeping and captaincy.

David Warner: 4/10
Three successive failures, only partially rectified by 48 in the final innings, Warner was definitely not himself, and the injury may well have contributed to this. One would expect him to bounce back in South Africa, although whether there are any mental demons from Sandpapergate remains to be seen.

Matthew Wade: 4/10
Apart from a couple of 40s, Wader never really got going at all. Some wild swipes and top edges punctuated his batting. It is hard to see where he fits in the team in the longer-term.

Travis Head: 4/10
Similar to Wade – Travis Head’s penchant for getting out to loose shots outside the off stump, after promising starts, cost him his place in the side. The number five spot is a real headache for the selectors.

Joe Burns: 3/10
Apart from one consolation half-century in Adelaide with India on their knees, this was a very poor series. Looks out of his depth against top-class bowling.

Another poor batting performance from England has all but ended Australia’s slim hopes of progressing to the World Test Championship Final in June.