We head west to Rosehill for this Saturday’s nine-race card, which is highlighted by some of the big autumn types returning from a break in the Group 2 Expressway Stakes.

We’re also greeted by the return of the Saturday Sydney wet track. I’ve done my numbers based on a soft six or seven, but hearing the constant pitter patter on the roof we could even get into heavy range. Good luck.

As is becoming standard, I’m happy to skip the Highway and two-year-old lotteries. I am kicking off in Race 4 today and hoping to do my best work late in the afternoon.

2020-21 season (since 1 August)
Outlay: 331 units
Return: 418.3 units
Stats are based on one unit being equal to a $1 win bet, New South Wales dividends. See the comments for any changes based on scratchings or track condition.

Race 4 – 7 California Longbow (one unit)
I see good things with California Longbow here. He should now be fully fit with three runs under his belt this preparation. He backs up quickly after chasing Sacramento last week, has a nice draw and should handle soft going. Vadiyann rated well but lugging 61 kilos in the wet is a risk. It is similar with Great House having his first run in wet conditions since coming down under.

Race 5 – 7 Tycoonist (one unit)
Tycoonist has improved dramatically since being gelded, including a nice win last start in the same grade. While he gets the customary weight increase here, if he handles the track he’ll measure up. Brazen Gem at odds is worth a look. She’s up quickly in distance but hasn’t had much luck lately and will like the wet.

Race 6 – 10 General Soho (two units)
General Soho is nicely placed here. He was around the mark without winning going back to midweek level. He gets a nice weight drop back running on Saturday and has soft track form. Looking elsewhere I’m wary of Cuban Royale. He prefers it dry but can run a race at odds and is hard fit.

Race 7 – 2 Star of the Seas (one unit)
Class is permanent, but is 1200 metres too sharp? That’s the question with Star of the Seas. The boy is top level and generally ready-to-go fresh, but has previously run at 1400 metres first-up rather than taking on the sprinters. I’ll back his class to come through and he’ll nab them late on his preferred soft surface. It’s a good race with a lot of chances. Savitiano flies first-up but is a risk at the distance as well. Ole Kirk is a superstar miler. Flit can pop up.

Race 8 – 10 Brutality (two units)
The piggy back went on Brutality last week and he (and the wide gate) let me down. What to make of the quick back-up and similarly ordinary barrier? Re-load! He meets Above and Beyond 2.5 kilos better from their clash three weeks ago. Surely my nemesis can’t do it again? Betcha Flying is the other one who rates well. Note all three horses are at their best on soft surfaces.

Race 9 – 6 Handspun (three units)
I am throwing the dice and finishing the day with Handspun at the big price. A distance of 1200 metres isn’t perfect but her win on a heavy track six months ago puts her at the top of the list for this. I trust that Godolphin have her right after her flop last start. The shorties Big Parade and Masked Crusader are quaddie additions. Albumin is a blowout hope as well. He’s better than ever and always does his best stuff at Rosehill.

Good luck one and all. Stay and dry and get the quaddie. As always feel free to post your comments on the best bet of the day and hard luck stories.

Ash Barty an inspiration to all female athletes

Told she was too small to make it, Ash Barty has most definitely had the last laugh.

Ash Barty an inspiration to all female athletes

Australia coach Stacey Marinkovich insists the Diamonds are heading in the right direction despite losing netball’s Constellation Cup to New Zealand for the first time in eight years.

What a monster from Bryson DeChambeau! 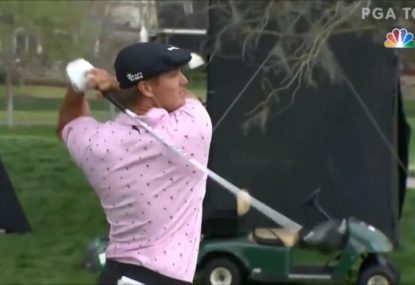 Thank goodness everyone escaped this unharmed! 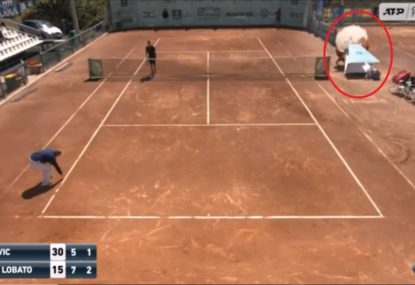