However, the result may have been much different if the Saints had been able to convert their early dominance into goals. Seven shots at goal in the first quarter all resulted in minor scores, and it was nine minutes into the second quarter (and two more behinds) before future champion Max King booted the first for the Saints for the night and his 35th career goal.

In the end, Geelong came out victors despite the Saints having four more scoring shots and continued their impressive record against St Kilda which has resulted in them losing only one game in the last 12 encounters between the two clubs. Despite their current third placing and their impressive win last week, the Cats have still not convinced the punters and remain outside the top four favourites to win the flag.

The Saints are currently 11th on the ladder but still close enough to be contemplating another year of top-eight finishes. St Kilda will be tested again next week, this time by the Western Bulldogs at Docklands whereas Geelong face the easier assignment of playing the Gold Coast Suns at their Geelong fortress.

Like all modern-day matches, Friday night’s game provided plenty of individual milestones for players on both sides: Jake Kolodjashnij, who, along with his brothers is one of the strong arguments for Tasmania being able to hold its own talent-wise in an expanded AFL competition, completed his 117th AFL game without kicking a goal. Port Adelaide’s Tom Clurey is the only other current-day player who has passed the 100-game mark without raising two flags, and he currently sits ten games behind Kolodjashnij, who now shares 18th position of non-goal scorers with former St Kilda player Stan Lloyd, who won the Saint’s Best and Fairest in 1938 and captained the club in 1940.

For Tim Membrey, his first goal for the night at the 23rd minute of the second quarter marked his 200th goal in AFL football and he became the 19th Saint to achieve this total.

Joel Selwood played his 319th game for the Cats and moved one game closer to possibly becoming the greatest game player at Geelong of all time. Selwood has captained the club for over 200 games – the most by any Geelong captain – and he now sits level with ex-Hawk and Demon Jordan Lewis in 52nd position on the AFL all-time top 100 game players.

Tom Hawkins scored two goals to take to 623 goals, level with Brendan Favola, a Carlton favourite in the early 2000s who finished his career at Brisbane in 2010. It also drew him level, temporarily at least, with another current Carlton favourite in Eddie Betts who also spent time at Adelaide.

Amongst the current top 100 game players at the two clubs, Cameron Guthrie drew level with Wayne Closter, who lost the opportunity to play more than 191 games due to a stint in Vietnam after being called up for national service. Closter missed most of the 1969 and 1970 seasons, but remained at the club until 1975 and was often moved into the centre despite the club at that stage having one of their greatest centremen of all time: Dennis Marshall. A natural right-footer, Closter kicked well with both feet.

He played in the losing 1967 grand final side for the Cats. The match was also the first game for James Frawley at his new club, the 100th game for Jimmy Webster and the 50th game for Callum Wilke. Unfortunately, all were on the losing side against St Kilda. 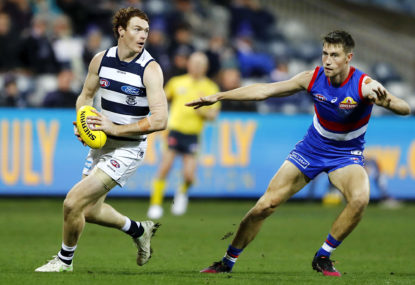