Essendon livewire Jake Stringer has added his name to the growing list of key players re-signing with the AFL club, inking a new three-year deal.

The 27-year-old – dubbed ‘The Package’ from his time at the Western Bulldogs – will now remain at Tullamarine until at least the end of 2024.

Essendon enter Sunday’s clash with GWS at Metricon Stadium in eighth place and are on the verge of a finals appearance in Ben Rutten’s first season as head coach since he took over from John Worsfold.

Stringer’s signature comes as another vote of confidence for the Bombers’ direction under Rutten.

“We’re really building something that’s going to be pretty special to be a part of.

“Truck (Rutten) has been terrific for me this season and the boys are as determined as ever to take this club back to where we want to be.

“We still have a long way to go, but I’m excited to play my part in that as one of the older guys helping to developing the young, exciting group we have.”

While Stringer is locked in, Cale Hooker’s playing future remains uncertain despite the versatile veteran leading Essendon’s’ goal-kicking this season.

Turning 33 in October, Hooker is out of contract at the end of 2021 and will qualify for unrestricted free agency.

The 218-game stalwart has been a crucial part of the Bombers’ surge to finals contention, kicking 32.22 from 17 games.

He has also been valuable in nurturing emerging forward Harrison Jones and providing support for off-season recruit Peter Wright.

“There’s probably not certainty about it just yet, but there’s certainly been good conversation and good dialogue with Cale throughout the whole year, as I (have) with a lot of players,” Rutten said.

“I think Cale’s been playing a really important role for us throughout this season.

“He’s had some inexperienced guys in and around him and I think his impact and his ability to allow Jonesy to do what he’s been able to do this year, and also to be able to help support Pete, and Cale has been able to have some really significant impact in some games as well.

“We’ve got to weigh all of that up and work with Cale as well.

“It’s a big decision for both parties to be able to continue on and we’ll make sure we do what’s best for him and the footy club.”

The Bombers appeared to have been out of rotations late… but they found a way. 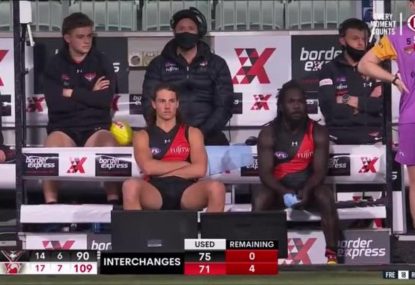 That was agonising. A drip, drip, drip of torture as the Bombers lost yet another eight-point game by an atrociously small margin to a weakened GWS line-up. The Bombers only have themselves to blame for another wasted season (their 16th consecutive wasted season but who’s counting). Read on for my thoughts and reactions of the […] 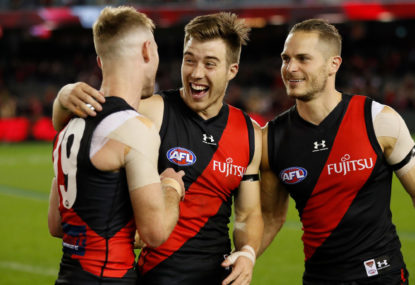