Australia’s 4x100m women’s freestyle team has won Australia’s first gold of the Tokyo Olympics, and smashed the world record in the process.

The team of Bronte Campbell, Meg Harris, Emma McKeon and Cate Campbell delivered Australia’s third straight Olympic gold in the event and the fifth in history. The time of 3:29.69 beat their 3:30.05 set in 2018 and they were three seconds ahead of the second placed Canada with USA third.

Follow the day 2 night session live in the comments section below!

Meanwhile, Australia’s women’s relay win was one of three medals on the opening morning of finals.

“That is an iconic swim in world swimming,” said Ian Thorpe on the Channel 7 commentary, as Australia went under the 3 minute 30 second mark for the first time.

Bronte Campbell and Harris were members of the team that won their heat with Mollie O’Callaghan and Madi Wilson missing out on the final team. 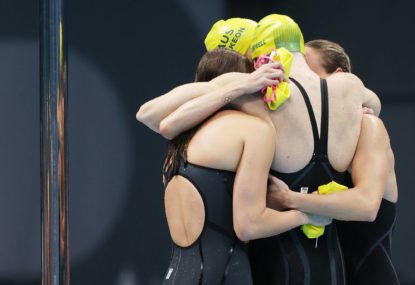 “I could not be prouder of these girls,” said Cate Campbell, the Aussie flagbearer who was on her third straight 4x100m team. “It’s been a hell of a tough ask for everyone to get here, but to come away with a win and world record it couldn’t be better.”

McKeon was the stand out swimmer of the relay and her sensational time of 51.35 gives her favourtism for the individual gold.

Campbell became just the third flagbearer in Australian Olympic history to win a gold at the same Games after Andrew Hoy in Atlanta 1996 and rower Bobby Pearce in 1926, and is the oldest Australian femal swim gold medallist.

The gold added to a silver and bronze earlier in the program. Brendon Smith has won Australia’s first medal of the Tokyo Olympics – taking bronze in the 400 metre individual medley swim while Jack McLoughlin added a silver in the 400m freestyle.

“That is fantastic, he wouldn’t have been expecting that,” said Ian Thorpe as Smith stormed home in the freestyle leg, coming from eighth after three disciplines. The gold medal was won by Chase Kalisz of the US.

But Thorpe said there might be some disappointment knowing that Smith’s time in winning Saturday’s heat would have won gold in the final.

“The thing that’s tough here, I have to point it out, is if he had swum the time he did in the heat he would have won that final,” Thorpe said on the Channel 7 commentary.

“And it’s being able to back up from those races and what you do in recovery to be able to get the best out of yourself but still a bronze medal, if you asked him before he came in to these Olympic Games, I doubt he would have said he would have expected to medal.”

Smith was the surprise fastest qualfier for the final. He struggled in the breaststroke leg slipping to eighth after going through the first two disciplines in third.

“It’s unbelievable,” said Smith. “Twelve months ago when the Games were cancelled or postponed, I thought give me another opportunity, another year to better my preparation from last time so, you know, to improve that much and to be able to get on the podium is incredible.”

In the 400m freestyle Australia’s Elijah Winnington and Jack McLoughlin had entered the meet with the fastest two times in the world this year but qualified equal fourth for the final after a dead heat in their heat.

McLoughlin held a lead after 350m of the 400m freestyle but was run down by a shock winner – Tunisia’s Ahmed Hafnaoui, 18, who celebrated wildly at the finish and won from lane 8.

“I put my head down in the last 10. Second in the Olympics is pretty good,” said McLoughlin.

He said he couldn’t see the winner six lanes away.

“Hell no, I’m pretty much blind blind,” he told Channel 7.

‘I normally wear glasses. I was lane 2. I knew I would be able to see him on the way home and saw the boys in the middle come in.”

Winnington struggled to back up after his effort the night before.

The women’s 4x100m looks a lock for gold – barring a major error – after the second string lineup produced the fourth fastest time in history to qualify fastest for the final. Cate Campbell and Emma McKeon were rested from the heat. The selectors have chosen the order of Bronte Campbell, Meg Harris, McKeon and Cate Campbell.

McKeon was third fastest into the 100m butterfly final behind Yufei Zhang of China. McKeon clioocked 56.33 seconds to finish .44 behind Zhang in heat two.

There were questions raised over the timing pads in the pool following McKeon’s dead heat with Zhang in the heats but officials said she had made a light touch.

The medal winners had the night off but Australian star Ariarne Titmus was third in qulifying for Monday’s final, with katie Ledecky first.