American Joshua Franco retained the belt with a unanimous points decision over Maloney in the pair’s eagerly-anticipated rematch in Oklahoma.

All three judges awarded Franco the 12-round bout 116-112 after Moloney struggled to penetrate the tough Texan’s defences in the so-called “Trilogy” in Tulsa.

Franco had taken Moloney’s world title when he inflicted the first defeat of the Australian’s career last June.

Their return bout in Las Vegas in November was widely condemned as scandalous after Moloney was denied victory following an epic 30-minute video review.

Officials deemed Franco’s closed right eye was the result of an accidental head clash and declared the fight a no-contest, despite even US commentators being adamant that a Moloney left power jab had done the damage.

Alas, after nine months of sacrifice, three stints in quarantine and endless time away from his family, Moloney fell short of righting one of boxing’s great wrongs on Sunday (AEST).

But there was joy for his twin brother Jason, who is the new WBC silver bantamweight champion after recording a unanimous points decision over American Joshua Greer Jnr on the undercard.

The judges awarded Moloney the fight 98-92 98-92 96-94 after the 30-year-old dominated Greer Jnr, easily landing more clean jabs and body blows throughout the 10-round tussle. 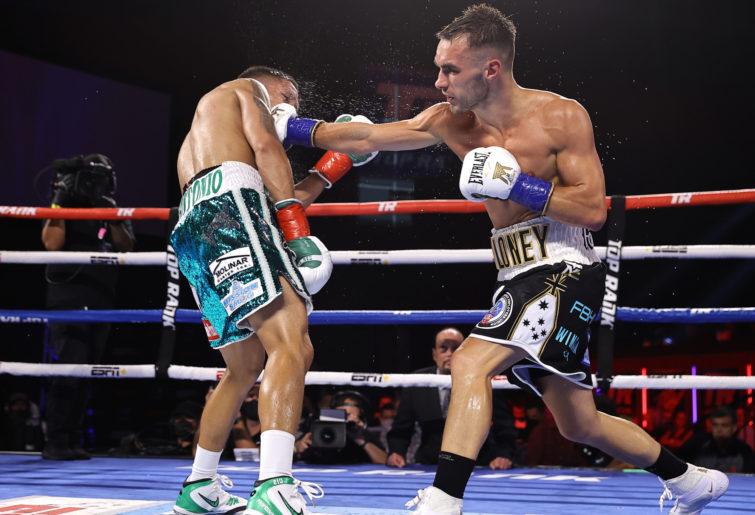 The victory improved Moloney’s record to 22-2 (18KO) and edges him ever closer to his own world title fight.

The Moloney brothers had the distinction of fighting either side of the much-anticipated professional debut of Muhammad Ali’s grandson Nico Ali Walsh.

“Honestly, it seems like a lot of pressure but to me, it’s just my grandfather,” the 21-year-old said.

Honouring his legendary grandfather by sporting Ali’s original 1960s trunks, Ali Walsh pounded Weeks with a series of stinging head shots that left the referee with no choice but to stop the fight after one minute 48 seconds.

“I’m never wearing these trunks again. They were my grandfather’s. It’s so emotional,” Ali Walsh said.

“This is a dream come true.”