Has Toby Greene already cost his side the semi? Four talking points from the epic Sydney derby

After a match that will take some beating for game of the year, the Giants have prevailed over the Sydney Swans by a single point.

This match was one for the ages; here are four talking points that emerged from the action.

Toby Greene’s good is matchwinning, but his bad…

Toby Greene was at his brilliant best in the first half of the semi-final, kicking three first-half goals to help give the Giants the commanding advantage they ultimately wouldn’t relinquish.

He may have only finished with the ten disposals, but his six score involvements were crucial and he was one of his side’s genuine matchwinners.

Unfortunately, all anyone was talking about after the game was a silly act off the ball that looks certain to see him rubbed out of next week’s semi-final with Geelong.

Going back to his huddle after the three-quarter time had siren gone, Greene was having words with umpire Matt Stevic while walking towards him and, for reasons we don’t yet know, decided to bump Stevic with his shoulder on the way through. 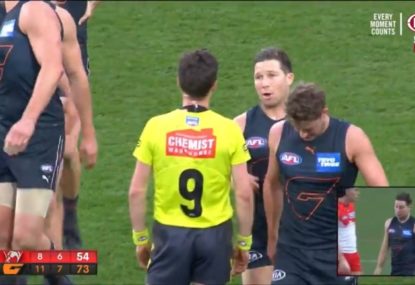 Is Toby Greene in massive trouble for this 3QT umpire incident?

It’s likely it was ‘just’ a clumsy attempt to demonstrate something he was unhappy with during play, rather than an actual deliberate physical act on the umpire, but either way, it’s just not on.

You don’t make contact with umpires, full stop. It’s something that’s drilled into footy players from a very young age and there’s simply no excuse for Greene to think he was acting reasonably in those circumstances.

The match review officer issues fines for reckless contact with umpires, normally for accidental collisions while the umpire is backing out form a ball-up, but this was deliberate and it’s very hard to see him escaping with anything less than a week.

That’s how many consecutive scoreboard blemishes the Swans made after Isaac Heeney’s fourth goal, meaning GWS’ vulnerable-looking seven-point lead ended up being enough.

Tom Hickey was the first culprit, although his kick was from just inside 50 and on something of an angle.

Sam Wicks was the next to misfire, breaking through the pack and throwing it on the boot a fraction earlier than he had to. The running shot, which he’d been nailing all year, hit the post.

James Bell is the player who’ll have the toughest time getting to sleep tonight, however. He marked just in front of the goal square and only had to nail a 20-metre set shot with virtually no angle – but he, too, hit the woodwork.

Dane Rampe’s overcooked pass to full forward made it four minor scores in a row, before Lance Franklin missed a tough shot from outside 50 and Justin McInerney’s pressured snap was touched on the line by Harry Perryman to complete the lay-by goal.

You can point to the fact Sydney were down by 29 points in the second half and took too long to switch on as the main causes for the loss and you’re not too far off.

But, unfortunately, this wasn’t a comeback that fell short. Given the sheer dominance of the fourth quarter and the plethora of opportunities, this has to go down as a squandered win.

Efficiency inside the arcs proves crucial

The Swans had the lion’s share of the inside 50s all afternoon and finished with a healthy 65-46 advantage in that department at full time.

But it was the Giants who made Sydney’s defence pay when they had the ball down their end.

During GWS’ blistering assault in the second quarter, they were a perfect four goals from four entries at one point, while the Swans were struggling to get past the back six thanks to superb efforts from Sam Taylor and Jake Stein.

The visitors used patient ball movement to get themselves to a good position at half-forward and were able to send precise, dangerous kicks deep inside 50.

Four in a row and after looking in trouble for a while there, GWS suddenly has a handy lead ????

On the other hand, Sydney had reverted to their oft-criticised ‘bomb it to Buddy’ strategy of recent years which, unsurprisingly, had little effect.

While they were able to switch things up in the second half by moving Franklin further up the ground and allowing Heeney and Papley to work better in the space, they were already five goals in arrears by that stage and the hill proved too big to climb.

Would Kennedy and Mills have been a big help?

Sydney had enjoyed a stunningly blessed run with injury all throughout 2021, but were stricken at a bad time with midfield stars Josh Kennedy and Callum Mills both unavailable for the elimination final. 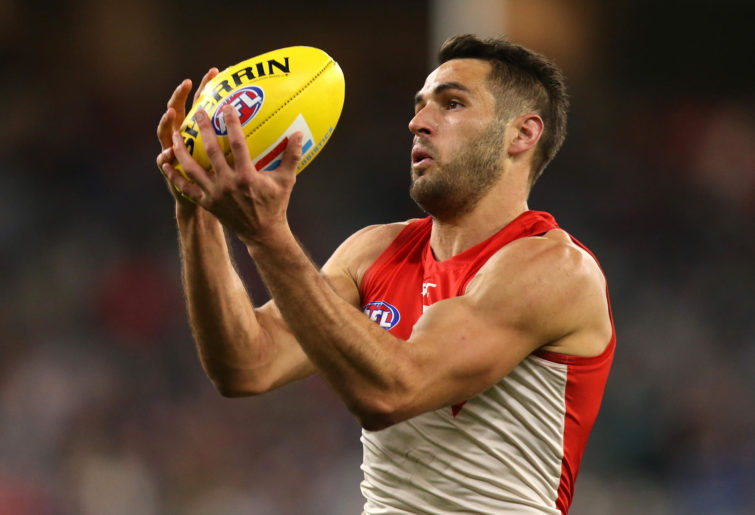 The stats don’t make for the worst reading in the world. The Giants got up in the contested ball by 13 and clearances by eight, but it was the stoppages around the ground where the experienced head of Kennedy and silky ball movement of Mills were missed.

GWS enjoyed a whopping 36-22 advantage in the stoppage clearances for the game and their first half onslaught was powered by several goals kicked directly from forward 50 stoppages.

Jack Riewoldt claimed the league average for goals from a forward stoppage per game was just one.

Greene, in particular, was able to lose less experienced opponents with ease as John Longmire struggled to find a player who could go with him.

Luke Parker was immense with 34 touches and eight clearances, but his ball use wasn’t superb, while George Hewett stepped up with 19 touches and 13 tackles.

The Swans, however, are at risk of losing both in the upcoming trade period. Today proved this Swans midfield doesn’t bat as deep as it did during the mid-2010s heyday, so keeping all four big names on the park – and maybe adding some reinforcements – will be a must.