Australian all-rounder Ellyse Perry has created more history in the day-night Test against India on the Gold Coast but the rain-marred clash is set to be a draw.

At stumps on day three in the rain-marred contest at Metricon Stadium, Australia are 4-143 in reply to India’s 8(dec)-377, still 234 runs in arrears in the first innings.

Perry, who had earlier become just the third women’s player to claim 300 international wickets, is unbeaten on 27 with Ashleigh Gardner not out 13.

It seems only an unlikely set of circumstances across the final day can prevent the match finishing in a stalemate.

“The reality is losing a whole day of a four day Test is really difficult to get a result,” Australia’s Alyssa Healy said.

“We’ll have to wait and see how it pans out but I think we’ll just come out tomorrow, try and work really hard in the first hour – they’ll come really hard and try and take some early wickets – just get through that and see what position we’re in.”

Perry, playing her 250th international, claimed scalp No.300 when she dismissed Pooja Vastrakar (13) in what was the final delivery of the opening session.

The 30-year-old also became the first Australian cricketer – male or female – to score 5000 runs and claim 300 wickets in international matches in the process.

Perry joins Indian veteran Jhulan Goswami (339) and England’s Katherine Brunt (301) as the only women to have 300 or more international scalps.

“There’s no stopping her at the minute. She’s checking off things left, right and centre.”

Mooney was clean bowled for four playing all around a delivery in the seventh over.

Goswami returned for a second spell and struck again when she delivered a full ball outside off-stump after peppering Healy with short deliveries and the Australian opener edged behind to fall for 29.

Dropped twice before tea, Australia captain Meg Lanning’s luck ran out in the final session when she was given out LBW off the bowling of Vastrakar (2-31) despite replays showing she had edged the ball onto her pad.

Vastrakar struck again later to remove Tahlia McGrath (28), leaving Australia four down and still 108 runs short of the follow-on target at that time.

Earlier, Perry (2-76) and teenage debutante Stella Campbell (2-47) were the only wicket-takers for Australia as India took their overnight score from 5-276 to 8-377 before declaring.

Deepti Sharma scored a career-best 66 before she was trapped LBW by 19-year-old Campbell, replays showing the ball had pitched well outside leg stump.

That was Campbell’s second scalp in her first Test, having claimed her maiden wicket with just her second delivery of the day with Taniya Bhatia (22) caught behind.

Australia lead the multi-format series 4-2 after three one-day internationals in Mackay, with play on the final day of the sole Test to start at 2 pm AEST.

We are finally on the eve of the 2021-22 Ashes series. Probably the most anticipated and talked-about series between the Old Enemies since 2005-06, the series after England had finally regained the urn in that famous 2005 series. The lead-up to this series has had everything: England threatening to pull out of the tour due […]

With the Ashes series now under three days away, England captain Joe Root has admitted the upcoming fight for the urn will ‘define my captaincy’. As the two skippers met at the Gabba ahead of the first Test of the series, beginning on Wednesday, the England star and world number one batter also had high […] 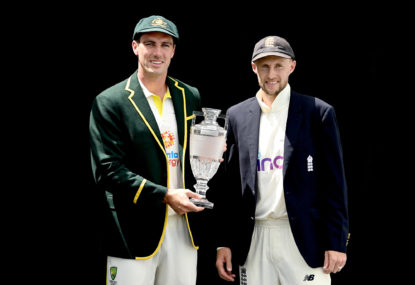 The summer of cricket is about to start and my mind drifts back to the summers of my youth.