It feels like the A-League Men has enjoyed something of a brief holiday over the last 14 days, aside from the 4-0 thumping Adelaide United dished out to Wellington Phoenix last weekend.

However, with any luck, at least some football will be played this week. Wellington will back up after their Wednesday night FFA Cup encounter against City when they tackle the Jets just four days later.

Victory will be out to extend their lead on the ladder with a win against Adelaide on Saturday night and who knows in what shape Melbourne City will be by Sunday afternoon, after their midweek fixture and the tired legs that have seen little football over the past fortnight.

Be sure to enter your tips in the sheet below to have a say as the ever important voice of The Crowd. Texi Smith continues to show the way, with the voice of the people breathing down his neck after a slow start to the season.

Here is the way the panel sees all the Match Week 9 action unfolding.

Wellington took a spanking from Adelaide United last weekend, but the Nix were unlucky to cop a tough penalty decision shortly after halftime. Ufuk Talay looked like he was going to spontaneously combust on the touchline and I reckon the Kiwis will be better for the run-out against their ring-rusty opponents. Expect a reaction from the ‘Nix.

Fresh from facing off in the FFA Cup in midweek, the original rivalry returns for a second stoush within a matter of days at AAMI Park. Whatever happens in the Cup, Victory should be well up for this clash. Adelaide, meanwhile, have got some issues, having seen Ben Halloran and now Stefan Mauk depart. Hard to tip against the hosts at home.

Carl Robinson has probably spent the holidays polishing his CV and scouring the want ads, even if he’s essentially been given the dreaded vote of confidence by Wanderers executives. Melbourne City have shown flashes of their best without setting the league alight this season, but they should have too much firepower for Western Sydney here.

I can’t split Wellington and Newcastle. The Nix were poor against Adelaide – I reckon Talay will be looking for a response and will make changes. The Jets haven’t played in nearly a month so might be a little rusty. Draw.

Adelaide finally took their chances against Wellington, and I think they will give Victory a decent game – but Tony Popovic’s team are on a roll. Predicting this one is complicated by the Cup meeting during the week, but the goalkeeping issues might play into Victory’s hands in front of a large crowd at AAMI Park.

Wanderers and City also haven’t played in a while – but City have the Cup tie with Wellington during the week and if they are at their best, I can’t see the Wanderers – in their current form – being able to live with them.

Wellington have poor form, a busy week ahead and the Jets look like the biggest improvers to this point of the season. That is enough to swing my tip confidently in the favour of Arthur Pappas’ team.

Adelaide will be buoyed by their terrific win against the Phoenix last weekend and will play the Victory for the second time in four days on Saturday night. With team changes and the result of the first fixture destined to influence the outcome, I’ll side with Victory on their home deck.

Melbourne City may well be thrown to the wolves on Sunday afternoon, backing up from FFA Cup action and with few miles in the legs. On the other hand, Western Sydney have shown little thus far in 2021-22.

It would be easy to go with the Wanderers based on the evidence at hand, yet City have the soul and spirit capable of overcoming the odds. Western Sydney do not.

The flight of the Phoenix is heading close to the flames, having played two games more than the basement team Brisbane and a long time since they surprised the Mariners to record their only win. Their stubbornness at home could be their saviour in this one, with Jets doing all the running and Daniel Penha providing the danger with his expert movement.

Alex Paulsen will be busy in the Wellington goal, but their blanket defending will be pierced once in each half, Olivier Boumal doing the damage with clinical finishing for both goals.

Now, this is the sort of prime-time football we want to see. Two sets of fans that hate each other, a rivalry as unlikely as Crystal Palace and Brighton, this will be the match of the round by far.

United will believe the hype after their 4-0 drubbing of Phoenix, but reality will hit them square in the face here as they leave Melbourne with nothing again. Victory will savage Adelaide in the first half, Josh Brillante curling in a wonder goal to make it two before the break and last week’s goal difference boost will be wiped out in the second half as the home team runs amok. 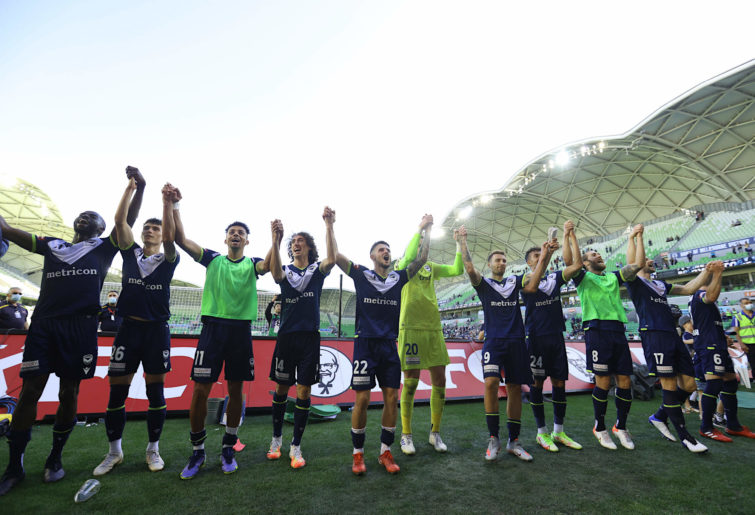 The last thing Wanderers needed was a trip to the champions Melbourne City. The injection of new blood into the coaching line-up for the visitors may see a Graeme Jones/Steve Bruce reaction and with their proven players able to draw on experience and knowledge, we could see a different look to this beleaguered Wanderers team.

For all their effort and graft, though, the City frontline will run riot. Poor Rhys Williams will be unable to prevent City taking the lead before halftime and then they’ll step on the gas to ease away in the second, Stefan Colakovski relishing his time in the limelight to score the third that seals the win.

As always, get involved as part of The Crowd and take on The Roar’s experts, including Paramount+ commentator Simon Hill, using the form below.