A number of others have also represented Australia but have never officially been recognised.

However, the 2023 World Cup presents the ideal opportunity for Australian football to reconcile with its past.

There is no doubt the red carpet should be laid out for all of the Matildas alumni. Free entry and even VIP treatment for all World Cup games should be a given. There also needs to be some work done by Football Australia’s media department to tell the story of a number of these women, many of whom feel disengaged or not even a part of our proud history.

The 1975 Australian XI had to do car washes and sell lamingtons to raise money to compete at the inaugural Asian Cup in Hong Kong. They came third, but this team isn’t officially recognised, with the history books marking the 1979 match against New Zealand as Australia’s first-ever international.

The 1995 the Matildas, who played in the World Cup in Sweden, were fitted out with uniforms that actually didn’t fit. They were given leftover gear from the men. The 1999 they had to pose nude in Inside Sport to grab some attention for the national women’s team. The 2010 Matildas won the Asian Cup, our first major international tournament, but the news barely caused a ripple at the time.

There have been many who overcame adversity or challenges to represent their country. Shelley Youman survived childhood domestic violence and went on to represent Australia after having three kids. Sandra Brentnall couldn’t even afford boots when she first played but went on to be the first woman to officially score a goal for the Matildas.

Joey Peters is one of our most gifted footballers ever. She earnt over 100 caps for Australia, but not many outside women’s football would know of her. 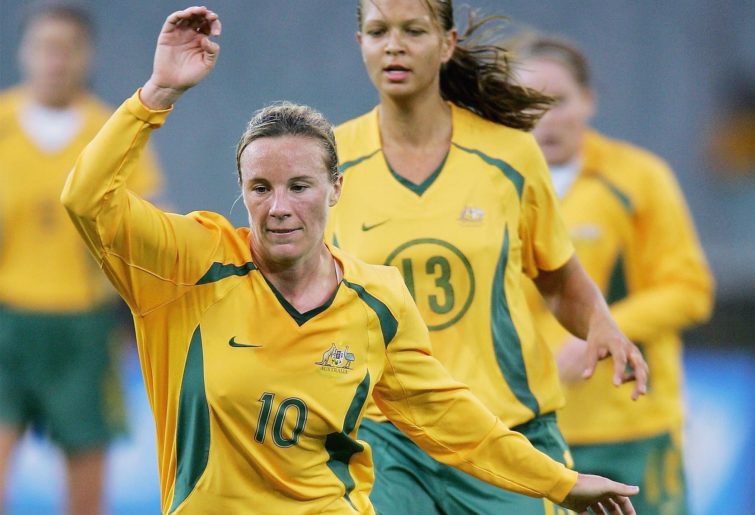 Sharon Wass is officially the youngest ever Matilda, making her debut at the tender age of 14 years and 240 days when she played against New Zealand in 1981.

Karen Menzies was the first Indigenous Matilda and was part of the stolen generations.

Leah Blayney first represented Australia as a 16-year-old but a crippling ankle injury ended her international career when she was only 22. But she is now dedicated to making the dreams come true for our future batch of stars in her role as Future Matildas coach. In fact many of her pupils will be living the dream in 2023.

Ella Mastrantonio also started her career at 16. She won six caps then. She didn’t play again for Australia for another 12 years.

Angela Iannotta grew up in Albury, learning the game by kicking the ball in her dusty schoolyard, but in 1995 she was the first Australian to score a goal at a World Cup.

Heather Garriock overcame family tragedy early into her career to go on to become one of our most decorated Matildas.

Alicia Ferguson overcame a crippling knee injury in the middle of her career to come back and play in a World Cup.

Alison Forman, apart from Tom Rogic, has won more domestic trophies than any other Australian footballer.

There are over 200 more women, each with their own story to tell, and 2023 is time to bring them back into the limelight.