This week’s announcement that the Young Matildas will play at the 2022 under-20s women’s World Cup triggered memories both fond and heartbreaking for the 2002 team that went to Canada for the inaugural under-19 women’s World Championships.

Midfielder Hayley Thompson nee Crawford made history in that tournament by becoming the first Young Matilda ever to score a goal at a women’s youth World Cup.

“Wow, that is a bit of history and seems like a long time ago now,” recalls Thompson. “Very proud – I still remember the goal.

“I remember at the time being happy to be there competing and starting the game, and then to score was a dream come true. But to be honest, the win for the team was the best feeling, more so than the goal.”

The 2002 under-19 women’s World Championships was the first sanctioned youth World Cup for women, so it was an exciting time for women’s football across the world.

The Young Matildas made it through to the quarter-finals, where they went down 4-3 in extra time to old foes Brazil in an epic encounter. The Brazilian team that day featured the likes of Marta Vieira Da Silva and Daniela Alves Lima, who netted a 100th-minute winner to break Australian hearts.

Despite the result, Thompson insists the game proved to her that Australia could compete on the world stage with the best.

“I remember it was such a good game with an amazing atmosphere that could have gone either way,” remembers Thompson. “Marta scored very early in the game, and we all knew from that game she was going to be a star – [we] didn’t realise how big, though, at the time.

“We were so close to beating them, and this was probably the best game of the tournament. We fell just short though, but it certainly made us all confident that we could match it with the absolute best of them.”

Thompson, who went on to be capped ten times by the senior Matildas and played 47 W-League games for Newcastle Jets and Canberra, was pleased the 2022 Young Matildas will have the chance to take on the world’s best in Costa Rica in August. This is the first time the Young Matildas have made the World Cup since 2006. 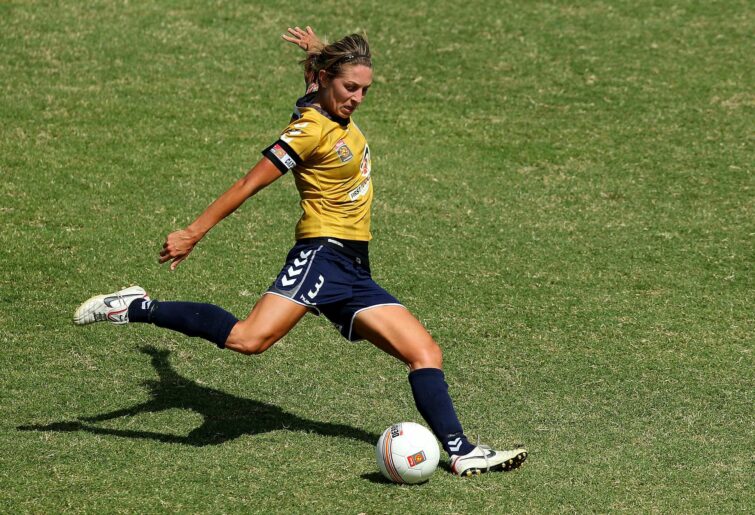 Thompson in her Jets kit. (Photo by Chris Hyde/Getty Images)

“I am thrilled the Young Matildas will compete at this year’s tournament. It’s been a while since we featured in this as a country,” she says.

“It’s so critical to our youth development to play in these tournaments, to expose our youth to high pressure and quality international games such as these, so when the chance comes to progress to the senior team they have this experience to lean on and learn from.”

The 2002 event was uncharted waters for Australian football, but Mike Mulvey’s team started the tournament with a bang. They thrashed Chinese Taipei 5-1 in Victoria, with Thompson scoring a double, while Cath Cannuli, Amber Nielson and Lana Harch also netted.

Their next game against eventual champions USA two days later didn’t go so well: a 4-0 drubbing to remind the Young Matildas they were playing with the big girls.

Australia had to secure at least a draw against England in the final group game to secure a spot in the quarter-finals. The 0-0 result saw both the Young Matildas and England go through.

In the quarter-finals in Vancouver, Brazil raced to a 3-1 lead thanks to a double from Marta and a strike from Kelly Christina Pereira da Silva. Two of Brazil’s goals came in the last three minutes of the first half.

Karla Reuter had cancelled out Marta’s fourth-minute opener in the 34th minute.

The second half saw the Young Matildas show tremendous heart, with a strike from Crawford and a Selin Kuralay penalty in the space of eight minutes getting the score back to 3-3.

Lima’s winner would see the Young Matildas come home early but with plenty of respect earned from their South American opponents, who would form the other half of a storied rivalry in senior international battles over the coming years at the Olympics and World Cups.

The 2007 senior World Cup would see Brazil beat the Matildas 3-2 in the quarter-finals, the 2015 World Cup saw Australia gain revenge with a 1-0 win in the group stages, the 2016 Olympics in Rio saw the home side win an epic quarter-final penalty shootout 7-6 after it was 0-0 after extra time, and of course the famous ‘miracle of Montpellier’ at the 2019 World Cup where Australia came from 2-0 down to win 3-2 in the group stage.

For the record, the USA went on to win the 2002 under-19 women’s World Championships, beating Canada 1-0 in extra time in the final, with Lindsay Tarpley scoring a 109th-minute winner.

The 2022 under-20 women’s World Cup will be held from 10-28 August in Costa Rica, with 16 nations taking part. Leah Blayney will coach Australia and in the process will become the first woman to coach an Australian national team at a World Cup.

Judging by past events, the 2022 team will be keen to write their own exciting chapter in Young Matildas history.