The Blues have overcome the Crusaders 27-23 in a match between the top-ranked New Zealand teams in Super Rugby Pacific on Friday, claiming their first win in Christchurch in 18 years.

The Crusaders lost lock and captain Scott Barrett to a red card in the 46th minute when they were trailing 17-10.

With centre David Havili already in the sin bin the hosts were down to 13 men, and conceded a converted try which gave the Blues a 24-10 advantage.

But the Crusaders rallied with two second-half tries to winger Sevu Reece to cut the Blues’ lead to four points and ended the match on attack.

A try-saving tackle by Blues captain Dalton Papalii and centre Rieko Ioane on Crusaders lock Dominic Gardiner in the 78th minute allowed the Blues to clinch a long-awaited win.

Gardiner was put into space on the right flank and seemed to have the goal line at his mercy but Papalii, dazed from a previous tackle, got up and with Ioane’s help forced him into touch.

“I don’t really have the words. For me it was quite emotional out there in those last 10 minutes,” Papalii said.

“The boys just dug deep and I couldn’t have asked any more of my lads in coming down here and doing the job.

“All week we said it was finals footy and the Crusaders had the platform for too many years. To come down here and get the win was truly special.”

In the contest between All Blacks No.10s, Beauden Barrett for the Blues had the upper hand early over Richie Mo’unga for the Crusaders and created two first-half tries.

Fullback Will Jordan scored the first try of the match for the Crusaders from a dominant scrum, combining with Reece who put him into space.

But Barrett broke the Crusaders’ defense in the 21st minute to create a try for No.9 Finlay Christie and sparked a short-side movement which led to a try to Papali’i in the 31st.

With a two-man advantage, Blues hooker Kurt Eklund scored a try from a lineout drive in the 47th to put his team ahead by 14 points.

Beauden Barrett then was part of a tactical meltdown by the Blues who resorted to a pointless and inaccurate kicking game while still with a one-man advantage in the second half.

The tactic gave the Crusaders endless counter-attacking opportunities and brought Mo’unga into his own.

Mo’unga created a 50/22 in the 54th minute and from the lineout a long pass from Argentina back-rower Pablo Matera sent Reece over for his first try.

In the 71st minute Reece scored again in a movement which appeared to feature both a forward pass and knock-on.

That cut the Blues’ lead to four points and they were under pressure for the remainder of the match but held on to go top of the championship table.

The Crusaders have won their 11th Super Rugby title with a dominant 21-7 victory over an out-gunned, outplayed and fumbling Blues. On a cool,…

There is always something epic overhanging a semi-final. For the winners, it's muted elation, knowing that they’re off to the big show albeit with… 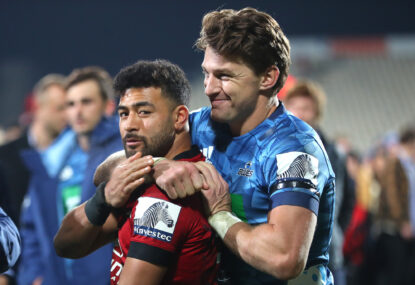