Formula One has always been known to be a cyclical sport. Drivers come and go, as do teams and importantly their success.

It is very rare to see a single driver or team sustain success for a long period of time.

That is something Mercedes have achieved in their relatively short history as a works team in Formula One, by comparison to the likes of Ferrari and McLaren.

Since the turn of the hybrid-turbo era in 2014, the bright minds and brawn of Brackley and Brixworth have dominated Formula One, winning seven consecutive drivers titles and eight straight constructors crowns.

Mercedes endured and flourished through multiple changes in regulations in that time, along with their class-leading power unit, which had always been at the forefront of their world-beating cars.

Four races into the next revolutionary phase of Formula One, with ground-effect cars as well as a performance cost cap, it appears that the Mercedes juggernaut’s time as the class leaders of the sport may have come to an end.

Or that is what the common narrative suggests. 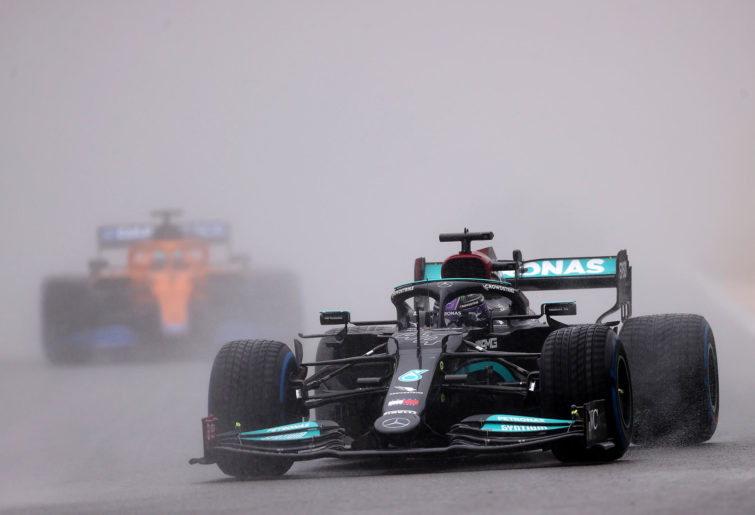 There was a disastrous weekend at the Emilia Romagna Grand Prix, where seven-time world champion and 103-race winner Hamilton’s 63 laps were summarised by the fact he couldn’t pass the AlphaTauri of Pierre Gasly and escape the reality of finishing outside of the top ten.

That is completely ignoring the fact that the new Mercedes driver George Russell finished an excellent fourth and is the only driver in 2022 who is yet to not finish a race outside of the top five.

Perhaps young Russell, after plying his trade in a subpar Williams for three seasons, can accept a subpar Mercedes more than Formula One’s greatest of all time.

There were scenes at Imola of Hamilton having exchanges with team boss Toto Wolff after qualifying on Friday, as well as the 37-year-old Briton bluntly conceding to the press that he is “not in contention for the championship”.

It is so easy to get swept up in that negativity that it is forgotten who Mercedes and Hamilton are.

This is a combination that knows nothing other than winning, though the test of a true champion is how do they manage during the times they cannot succeed.

Throughout Mercedes’ dominance from 2014, there have been moments when they struggled or could not beat the opposition.

They’d simply bounce back stronger for the next time, which would generally be the next race.

However, 2022 seems a jarring juxtaposition and mere upgrades may not remedy the fundamental issue that is exaggerating the porpoising problems of the W13.

Within the confines of the budget cap, gone is the adage of throwing money and resources at the problem to make it disappear.

Mercedes instead has to initiate their wit, which has been peerless since 2014, to decide whether to focus on the longer term and the success that could come in 2023 and beyond – or throw whatever is at their disposal at making the current radical car concept work.

Such are the concessions of the current regulations that the further from the top Mercedes would place in the constructors championship, the more wind-tunnel and CFD testing they’d be allotted.

That is a la Ferrari at their nadir in 2020, which allowed them to divert their resources on the 2022 project, which for now has proven to be a success.

What’s also intriguing is that depending on the circuit, Mercedes on occasion still has the third fastest car.

And if Daniel Ricciardo’s comments about his own McLaren team, and not being “surprised if we win a race this year”, is anything to go off, then perhaps there’s no need to be concerned that Hamilton’s special record of winning a race in each season he’s contested is at risk.

Overall, it is the mentality that Mercedes and Hamilton adapt that ought to be the defining factor.

The Silver Arrows are a unique outfit and it can be foreseen they won’t suffer the same droughts as the likes of Ferrari, McLaren and even Red Bull, who are without championship glory since 2013.

A character-building 2022 should set them up to be contenders once again the following year.

However, ringing the alarm bells, like has been done, seems inappropriate and faithless within the team and drivers.

Russell has performed admirably and Hamilton still achieved a podium in the opening Bahrain Grand Prix.

Even at 37 years old, the Briton is still capable of grasping that record eighth world title.

Though ultimately, it’ll come down to whether he upholds the belief in the team that has provided the world to him in return.

He should remain unperturbed through this time, when others bask in Formula One’s leading glory for a bit.