TheSecretScout
Roar Guru
9th May, 2022
12
Join the conversation
Advertisement
Write for The Roar

While Amsterdam may be the most popular place to visit when travelling to the Netherlands, Utretch is a city many people skip over.

Utrecht has some of the country’s best architecture as well as incredible inner-city canals that need to be seen to be believed.

It’s also home to the Dom Tower, which dates back to the 14th century, and every Sunday, it takes 26 people to ring all the bells at the same time at the tower.

The toll of the bells will be a sound that the latest Australian to grace the club, Josh Rawlins, will become familiar with.

The signing of Rawlins yet again underlines, no matter how fractured the maligned youth set-up is in Australia, the really talented boys will find a way to Europe.

Bas van den Brink is the head of scouting at Utrecht and regularly keeps an eye on developing players though his intermediaries here in Australia.

FC Utrecht is a great stepping stone for young Australians – Tommy Oar, Adam Sarota, Michael Zullo and Daniel Arzani have all spent time with the club.

Rawlins’ scouting reports over the past few seasons have rated him as one of Australia’s top five defenders and the right-back with the most potential in the country.

He has the ability to play anywhere in the back four, as well as defensive midfield – but right-back is his best position.

In what has been a disastrous season for cellar-dwellers Perth Glory, Rawlins has been a standout and a move to Europe is very well deserved.

He has started 14 games with an 80 per cent success rate in tackles and 83 per cent for completed passes. Defensively, he is incredibly sound with enough recovery speed when losing the ball to track back and win it.

Cool and composed with the ball, he has natural leadership abilities that are rare for a young player. Playing with the ball is the area of his game that will need the most improvement.

He is yet to score or offer any assists this season, but has only taken several shots and a few crosses.

This might make it look like he is a defensive fullback, but when Rawlins has the ball, almost 40 per cent of his distribution is for a forward pass and he has been fouled almost twice as much, compared to conceding fouls.

His attacking input in the final third, in particular when and where to cross, will be fine-tuned by an Utrecht club that is known for further developing players.

Rawlins was one of only two Australians (the other being Mohammed Toure) who were rated in the top 100 youth prospects in the world for 2021.

Just like Toure, who will be going to France come season’s end, Rawlins’ move to Holland was well-known and agreed to last year.

FC Utrecht regularly finish in the top ten of the Eredivisie and look likely to finish sixth or seventh this season.

Rawlins will have quite the task getting past 32-year-old incumbent right-back, Mark van der Maarel, as well as perhaps his long-term rival for the position, the promising Hidde ter Avest, who are both still under contract.

Rawlings must be patient to break into the first team and will need to prove himself for the Utrecht reserves in Eerste Divisie.

The Utrecht reserves have just finished a terrible season where they narrowly avoided relegation to Tweede Divisie – which is the third tier of Dutch football.

If Rawlins’ energetic displays don’t win the fans over, then his mullet haircut will certainly have tongues wagging in Holland – who knows, he might start a new haircut trend.

Technically and tactically, playing in Holland is a great move for any young Australian player – Rawlins now needs to work hard and produce consistent performances, keep this up and it wouldn’t surprise many to see him make the troublesome right-back spot for the Socceroos his own. 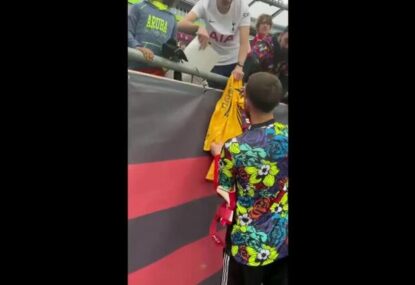