The first is depth at left-back.

The Blues played practically the whole of last season without their first-choice left wing-back, Ben Chilwell, who ruptured his ACL against Juventus in last season’s Champions League.

A crucial cog in Chelsea’s Champions League charge in 2020, Chilwell is critical to the side’s attacking output, able to hug the touchline and hold extreme width which subsequently creates space inside for the likes of Mason Mount and Kai Havertz, but also cut inside and link-up with his midfielders.

The former Leicester man also possesses a knack for goal-scoring, managing to find the back of the net thrice in his seven league matches last campaign. Defensively, there are few in the top flight better than him. He is the perfect knot that ties the Chelsea backline together.

In place of the Englishman was the defensively deficient Marcos Alonso, whose peak years were under current Spurs manager Antonio Conte, where his swashbuckling attacking raids were a key component in the Blues last Premier League title.

Now, five years on from that glorious season – where he grabbed six goals and three assists – the 31-year-old is out of favour at the Bridge. Defensively he lacks the ability and discipline to hold out a wing, failing to instil confidence in the fans in the stands and the players around him.

Although Cucurella is far too talented to be wastefully deployed as a back-up, his arrival from Brighton would ensure that, in the event of an injury to his first-choice, Thomas Tuchel has a player equally as adept defensively as he is offensively, and a player whose ability and play style closely mirrors that of Chilwell’s.

A frantic, high-energy attacker, Cucurella is also brilliant at maintaining width. His heat map from last season hints at his chalk-on-your-boots approach to play, with this propensity for touchline hugging dating back to his days operating on the left of midfield for Getafe.

The second problem he solves is one that has been brought about this summer, the left side of defence. Operating with a back three, the arrival of Kalidou Koulibaly can supplement the departure of Antonio Rudiger, who left for Spanish and European champions, Real Madrid.

However, the departure of Andreas Christensen to Rudiger’s now-rivals Barcelona means Chelsea are on the hunt for depth at centre-half. The club’s pursuit of Frenchman Jules Kounde stumbled at the final hurdle after Barcelona swooped in and somehow stole the former Sevilla man away from Todd Boehly’s advances.

The Blues have now turned their attention to highly-touted young defenders Wesley Fofana, from Leicester City, and Josko Gvardiol, the electric Croatian from RB Leipzig.

However, with both future stars on long contracts, until 2024 and 2026 respectively, as well as Chelsea’s widely-publicised defensive desperation, both defenders’ clubs are able to demand exorbitant fees – up to £80 million – for their commodities.

In Marc Cucurella, Chelsea has an unconventional option for the left side of their defence, at a discounted £50 million price tag. Cucurella’s natural preference for his left leg would allow Koulibaly to shift to his right, even if the Senegalese centre-half excelled on the left side for Napoli last year. 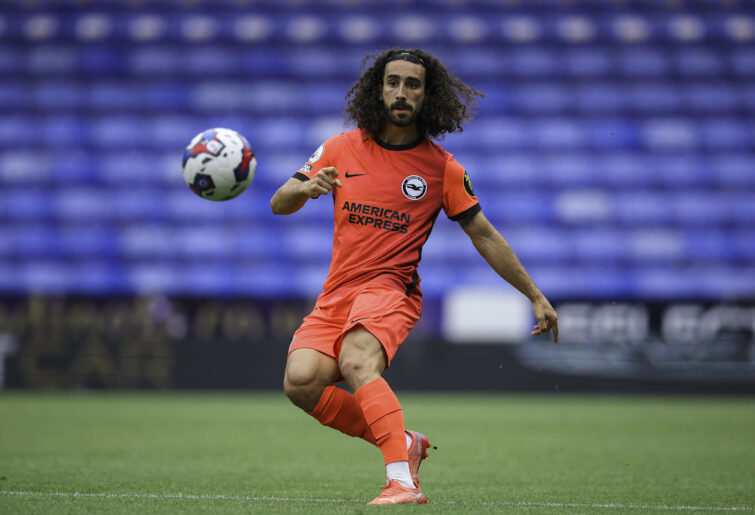 Cucurella’s shown the ability to play on the left side of a back three for Brighton last year, doing so 10 times in that campaign, including against his potential new employers where he put in a brilliant performance, grabbing the assist for Danny Welbeck’s 91st-minute equaliser, while also harrying Chelsea’s front three of Romelu Lukaku, Callum Hudson-Odoi and Mount as he won three tackles, over half of his duels and made two clearances all while making 115 touches, by far the most of any starter.

Additionally, his attacking ability and comfort on the ball tie perfectly into the possession style Tuchel likes his defenders to play with, which could see the Brighton man operate in a similar manner to Cesar Azpilicueta has, pushing forward on the right, linking up with Reece James, allowing the wing-back to move inside or push further down the touch line, offering an added attacking dimension with overlapping ones and creating an extra man in their offensive patterns.

Questions may be asked of his height, and aerial prowess, especially given the arrival of new No.9s Darwin Nunez, Erling Haaland and Gianluca Scamacca at Liverpool, Manchester City and West Ham this summer, as well as the presence of Harry Kane and Michail Antonio among others, all of whom possess incredible aerial prowess.

These concerns are valid, but the aerial strength of Koulibaly, Thiago Silva and Edouard Mendy, should be enough to cover.

What Cucurella would offer is speed to match that of Rudiger, formerly one of the Premier League’s quickest defenders, which would be highly useful in both marking up against tricky wingers, such as Mohammed Salah, and shutting down any counterattacks the side are victim of.

Of all of Chelsea’s defensive summer targets, Marc Cucurella appears to be the one able to solve the most problems for Thomas Tuchel’s side.