Time for some light relief from Aussie rugby politics. 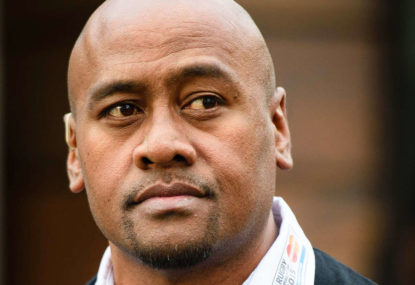 You mean apart from poaching foreign players, forcing them to play on six nations rest weeks, blackmailing them not to go to the World Cup, generally holding the rest of the world to ransom? No, I can’t think of anything either…

I’ve certainly seen teams stop or deliberately knock on before. But generally they want the free play.

I don’t think that it’s the job of the ref to second guess whether the attacking team want the advantage. Players can just stop playing, but generally they want the free play.

My mistake for believing Highlander! Let’s say he needs to prove himself while injury gives him the opportunity

Ioane won’t lack for motivation! Important for him to perform while Sotutu is out. Apparently he’s been training very well.

Jacko, the coach always needs to take responsibility, but can’t really be criticised for the two things you mentioned. Cruden has a bad injury record and was only just into full training. Trying to get him to play 80 could have lost him for the season. And it was the players that made the decision and error in that initially dominant scrum.

We are short a heck of a lot of experience, power, height and class in the forwards, especially the tight five. Cane, Karpick Ardron, Brown, Allerdice, Harris, Moli, Gus. That’s five internationals and all our experience at lock. Would the lineout have been such a disaster with two of those locks? Would one of them have coughed up the ball our rookie lock did on kickoff receipt, that ultimately lost the game?

Overall we were very poor, and definitely Gatland has to take responsibility for that and fix some things, but we have to be realistic.

Daniel, Sowakula also gave away the last minute penalty that lost us the Hurricanes game. Gatland will be having a few words with him I reckon.

The really encouraging thing was that it wasn’t just Sotutu, Tu’u looked strong at 8 too, also Tuipulotu and Parkinson at lock. Just in time, some big units putting their hands up in positions (lock and power loosie) where we are a bit thin. Let’s hope they keep pushing on, with Grace a very promising lineout loosie playing this weekend.

It’s all the countries, not just us. Everyone wants that block of tests for the world nations championship.

The problem was, the 2015 success wasn’t sustainable, the Tahs were soon bottom half. Most years you have all but one team bottom half whereas we have all but one in the knockouts. Having five Aussie teams diluting the strength of a competition would give it the most important basic weaknesses of Super Rugby.

If they are already competitive, champions league is definitely possible, even if not I’m sure they will soon become competitive.

I’m sure NZ will come to some sabbatical arrangements with Japanese clubs, but generally being able to directly nurture, develop and look after our players will only be given up if absolutely necessary. Obviously we would rather they go to Japan than Europe with the less demanding season and travel.

Absolutely. Both the July and November internationals have this problem, I was replying to Ash’s comment, he seems to think it an advantage to play the tests at the end of one’s season.

Actually, they are the ones who want their home tests in November. They want club games in May.

Tests would be better for us a bit earlier earlier, when we aren’t exhausted at the end of the season.

For me, the big questions are what the Japanese clubs want to do, and will they be competitive. They certainly have the money to be competitive, if that’s what they want. I’d have thought that they would prefer to keep their own league which they have just set up and involves all the clubs, but they could well be interesting in something after that. But I’m speculating.

There is already working together, after a fashion. Otherwise international matches wouldn’t take precedence during international windows and the RFU wouldn’t give £5m to each club every year. It’s just a matter of how that working together changes, for better or worse, in light of the financial difficulties of most unions and clubs.

That’s completely OTT Sheek. See my discussion with Highlander below.

The billionaire clubs are very much in the minority in England and France, just three in each. Other clubs are struggling and international rugby is where the public interest and profits are. And to have a ten month season you need someone to play against.

At the moment we are in an aggressive posturing stage, in the end there will need to be an aspect of working together, whatever that looks like.

Well said Highlander.
Some English clubs have threatened to form a breakaway league if the salary cap isn’t reduced, while french clubs have been begging for government handouts.
There aren’t so many billionaire clubs now and they need teams to play against. If we’re smart and brave we can win this. Surprisingly the less cashed up french and English clubs could be the key. Edit: you saw what happened to Sarries.

I’d be happy with an 11 week Super Rugby Aotearoa followed by a Champions League with whichever other countries are interested. To save on travel it could even be a short tournament hosted by Japan, the Celts or whoever.

So when it comes down to it, our game is now run by a few billionaires who care nothing about the sport, the players or the fans. More important to them is stroking their own ego playing with their little toy clubs watched by 13,000 people each week and with zero chance of ever making a proper commercial return.

Actually they seem to want to financially destroy the rest of the world so that they can hoover up whichever players they like. To not make the slightest compromise and allow an October window beggars belief.

I don’t know how much French club rugby you’ve watched, but in my experience, however much money they spend it’s a dull slog. They seem to suck the flair from players out of a fear of losing and the lack of time for a proper off season. For this reason, games are often ruined when the best players from the away team are rested. So determined are they to have a long season whatever the quality of rugby that they just keep on playing when the test players are away with their national side. Yet they also want to add the best players to their panini sticker collection.

Clearly World Rugby don’t believe they can actually govern the game and do what they know is needed. That’s a disastrous place to be.

Indeed what a wonderful weekend it was. Massive crowds, big coverage world wide, and amazing skill levels considering the break. Super Rugby Aotearoa is a format that works and I would love to find a way to not change it too much. Glad to hear the interest from your side of the ditch too.

Do we have any idea though of how big those broadcast deals are?

BTW that promo video was good, but is no way as inspired as this classic…

They’ve flattered to deceive many many times, but it does appear that the Blues are actually good now. Full marks to Leon McDonald who seems to have improved any number of players and given the team belief and structure. And how good was it to see them put the foot on the throat with those three second half penalties?

They suddenly seem to be very strong right through the team. Some test class tighties, so much depth at loose forward, a quality, complementary centre partnership and very good outsides.

Otere Black could have dispaired when Barrett followed him north, but at 23 he’s suddenly become a very competent game runner. TJ was classy at 12 and Sotutu could be the big loosie the All Blacks have craved.

All very promising. But we won’t get carried away, they are still only 50% against kiwi teams.

Corne, I agree, I’d be quite happy for this to become the norm. Keep the SR season short, so that every game matters with no blow outs against some of the foreigners. Nobody gets bored and you don’t need to rest your All Blacks. After that maybe a short champions league with your lot, the Japanese, Aussies and maybe the Celts. The Pro is a nothing competition, not a magical money tree like the T14 or Prem, I reckon they’d welcome it.

Mate, haven’t you learned that for some people Australia’s woes are everyone else’s fault?

I hope these crowds keep up through the competition!

I’ve googled it, he has signed to play for Castres in the 20/21 season, I’ve no idea whether he has already moved.

I saw Ardron’s name on a list of players moving to one of the French clubs and haven’t seen him mentioned in any of the Chiefs player lists. He’ll be a massive loss, he just fits in anywhere, does a good job and leads others. Clever player, good attitude. We really are thin on locks, or even loosies who can fill in.