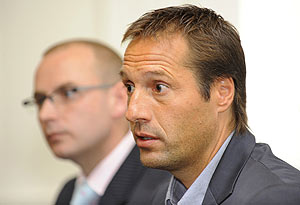 Enough is enough. It’s time for the FFA and Melbourne Heart chief executive Scott Munn and chairman Peter Sidwell to bite the bullet, ignore the competition to name the club being run in the Herald Sun, and keep the working title of Melbourne’s second A-League franchise.

In case you haven’t been following the saga of deciding the name of the club, the Heart – the name of the franchise holders, Melbourne Heart Syndicate – are floating four nominations for its name in a poll run through the Herald Sun newspaper, over a year since the franchise was given exclusive negotiating rights for the 11th slot in the A-League and five months after they were officially awarded the license.

It is this delay that makes this competition futile, but more of that later.

The four options short-listed by the franchise include the working title of Heart and three other choices. They are as follows:

Revolution is the most interesting candidate, in my opinion.

While many would rule the name out as yet another Americanised intangible name, some have pondered if Revolution does have some context considering its intimation to the Eureka Stockade, the closest Australia has come to revolution.

The Eureka rebellion has strong cultural and historical ties to Melbourne, and although the Southern Cross flag is often used as a symbol of protest, the meaning of Eureka has strong political and cultural connotations.

Whether such an idea would get past the FFA – who, let’s not forget, banned Melbourne Victory fans from bringing Eureka flags to matches before backflipping on that decision – seems doubtful.

If Revolution is selected and there is not some sort of link to Eureka, then it seems like a wasted opportunity to immediately inject some culture and meaning to the club, not to mention try and nab some supporters from the Victory, perhaps.

Melburnians has an interesting ring to it but seems a tad vague, while Sporting appears to be growing in favour as a tribute to Melbourne’s rich and varied sporting tastes.

But it seems to me this is a void debate, sadly.

The fact remains that according to the public the second Melbourne A-League franchise IS called Heart.

It’s too late now to move away from that.

When Mark Viduka has been linked with a possible return home it has been with the Heart. When they signed John van’t Schip it was as head coach of the Melbourne Heart team.

All the public awareness of the franchise is with Heart, and a new franchise can’t afford to lose that recognition and brand awareness when it is still in such an embryonic stage.

If Sporting wins out, for example, will people refer to the club as: “Sporting Melbourne FC, the club formerly known as Melbourne Heart?” I fear so.

This will be a branding disaster; not good for a franchise that is moving into a town alongside the most successful A-League franchise, without having any geographical or cultural – as yet – differentiation.

It’s a shame the FFA and the franchise waited and squabbled for so long on a name. Taking such a vote to the public is a great way to engage and build a fanbase, but more damage would be done in awareness for the club if they moved away from the Heart name.

Let’s hope commonsense wins out and they stick with Heart.