Expectations of excellence a heavy burden to bear 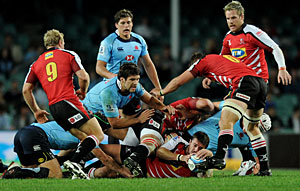 The Waratahs leave this season with the greatest prize any Australian Super Rugby team could hope for. Not even the brilliant Queensland Reds ,who still have the chance of winning the competition, can lay claim to it. And yet, it is the greatest gift any team, organisation, country or alliance could hope for.

It is the expectation of excellence.

Waratahs fans expect not just ‘a winning culture’ but a culture of excellence. And they have not been shy in making this known.

They do not turn up just to watch their team win, they turn up to watch a confirmation of their beliefs. Waratahs supporters see themselves and their team as representatives of some higher calling within the rugby world.

Fifteen disciples of running rugby whose greatest challenge doesn’t come from the opposition but comes from overcoming their own fear of losing and opening themselves to their more fabled than practised style of play.

To push the point about the expectation of the Waratahs fans, consider that this is a team that has reached the finals of the Super rugby competition in five of the last seven years and yet evoked sufficient discontent among its supporters to make a ‘fans forum’ necessary.

Waratah fans, much like the great Mark Loane, do not take mediocrity, or even above average, well.

This certainly didn’t happen in Queensland, and growing up in the John Connolly-era, kids like me didn’t care how we beat New South Wales as long as we beat them.

To complain about the style of a win seemed gluttonous and pretentious, but my southern cousins were different.

Teams can win without excellence. Underdogs can do the extraordinary, brutes can bully their way to supremacy, and otherwise also-rans can take the gold in a dud year (its called the Sandra Bullock effect).

But without the expectation of excellence, a team cannot reach that higher level.

It was what Brian Clough wanted for Leeds United when he told them that winning everything meant nothing if they weren’t loved.

It was why Ayrton Senna looked so disgusted with himself when he won the 1990 Formula One championship by deliberately taking out Alain Prost.

Its why Rory McIlroy’s style of golf so quickly had the locals at Congressional chanting his name, why Sir Frank Worrell’s West Indies team of 1961 were given a tickertape parade through Melbourne, and why kids born years after the career of Muhammad Ali wear clothes with his image on them.

People often talk of expectations in terms of their weight, the minimums that need to be met and the difficulty to live up to them. But there is another way to view expectations and it is what those in charge of the Waratahs need to realise.

Facing your expectations, not avoiding them, can be a very empowering experience.

Hopefully the Waratahs, as both a team and an organisation, can begin to hold each other to the expectations of excellence that are an essential part of the tradition of that name.

Waratahs fans have every reason to expect that to happen.