2012: One of two French Open titles Serena Williams should have won

With the year’s second major just six weeks away, one must think about Serena Williams’ chances of winning this year’s French Open title.

It was the third time in which she has saluted at that tournament.

But on the past two occasions in which she captured the title on the green clay of Charleston, it has led to a flop at Roland Garros, which historically has not brought any success for Williams since her solitary title in 2002.

Last year, she suffered her first ever first round loss at a major when she went down to Virginie Razzano in three sets.

Last year’s disaster in Paris was an anti-climax to what had otherwise been a successful clay court season for the American – apart from taking out Charleston, she had also won the Premier Mandatory event in Madrid, and reached the semi-finals in Rome before injury forced her to withdraw before her showdown against Li Na.

Once again, Serena Williams was given a very easy draw for the 2012 French Open – apart from drawing Virginie Razzano in the first round, she would have also drawn Arantxa Rus in the second round, Julia Goerges in the third and one of Caroline Wozniacki or Kaia Kanepi in the fourth round.

Williams and Sharapova would have met in the quarter-finals, where Serena’s dominance over the Russian would have gotten her over the line. Williams had also beaten Sharapova very recently in Madrid, en route to claiming the title there.

Either one of Li Na, Petra Kvitova or Francesca Schiavone would have later fallen victim to Williams in the semi-finals – she had (and still has) winning records against both of them.

And finally, one of Victoria Azarenka, Samantha Stosur or Sara Errani would have been no match for the American – again, her winning advantages over those three would have been the main factor.

The title was there for Serena to win, but her first round flop opened up the draw for Maria Sharapova to eventually capture the French Open for the first time, and complete a Career Grand Slam (which would later be complemented with a Silver Medal at the London Olympics).

I also believe Serena Williams should have also won in 2008, when she again enjoyed a solid clay court season before flopping at Roland Garros that year, losing in the third round to Katarina Srebotnik. Ana Ivanovic captured the title that year; she would have met Williams in the quarter-finals had the draw gone to rank.

But still, Sharapova’s draw was far from easy. Caroline Wozniacki was still the big threat looming in the quarter-finals, but the former World No. 1 was removed from Sharapova’s projected path in the third round by Kaia Kanepi, who eventually lost to the Russian in the final eight stage.

Following Wozniacki’s exit, the next highest opponent that Sharapova could have faced before reaching the final was Petra Kvitova, in the semi-finals.

Kvitova had famously beaten her in the Wimbledon final eleven months earlier (she has not defeated Sharapova in a completed match since, notwithstanding Tokyo where the Russian retired from their quarter-final match due to injury) and pushed her to three sets in Australia.

Kvitova eventually reached the semi-finals, but Sharapova would blast her off the park, and by winning that match, the Russian was guaranteed to return to the summit of women’s tennis three years after her ranking sunk to No. 126 following shoulder surgery which sidelined her for ten months between August 2008 and May 2009.

The crowning moment eventually came in the championship match where she ended the fairytale run of Sara Errani, who reached the final match after taking out three former major champions, as well as our very own Samantha Stosur.

It was a great achievement for the Russian whose career was hanging in the balance following the aforementioned shoulder surgery.

It showed the great determination that Sharapova had in never giving up in her dreams of returning to the top. Unlike many past former French Open champions, who have suffered from their results in subsequent years since Justine Henin’s last title in 2007, Sharapova still remains in the top three to this day.

Virginie Razzano must have been on the top of Sharapova’s Christmas card list last year, for removing the biggest obstacle from her path to the title in the first round. Sara Errani might have been next, as she removed three former major winners in her own path to the decider.

Sharapova’s title may also have comparisons to when Roger Federer completed his set in 2009.

When Sharapova won the title last year, she faced an opponent who had removed three major winners en route and had never previously passed the third round of a major until the Australian Open earlier in the year, in the final. That opponent was Sara Errani.

When Federer won the title in 2009, he faced an opponent who, in the fourth round, had caused one of the biggest upsets in Roland Garros history when he inflicted the only defeat Rafael Nadal has ever suffered in Paris. That opponent was Robin Soderling.

Some of his other victims en route to the final also included David Ferrer, Nikolay Davydenko and Fernando Gonzalez, the latter two coming after the defeat of Nadal.

Before the French Open that year, Soderling had never gone past the third round of a major. But his run to the final instantly made him a household name and 18 months later he would become a Top Four player in his own right. However, a bout of mononucleosis has since grounded him and he has not competed professionally since July 2011.

Perhaps Novak Djokovic might win this year’s French Open title in the same manner, as he bids to complete his own Career Grand Slam.

But with Rafael Nadal back in form, it would take more than determination and guts to try to stop the Spaniard from saluting for an eighth time at his favourite major tournament. Or, unless, if somebody pulls out a Robin Soderling or Lukas Rosol and knocks him out early.

It was Rosol’s defeat of Nadal at Wimbledon which opened up the draw for Andy Murray to reach his first final at SW19 last year.

I will preview Djokovic’s chances of saluting in Paris for a first time in a full preview of the French Open, to be published next month.

But for now, let’s just hope that this year’s Charleston title doesn’t lead to another disaster in Paris for Serena Williams.

We can only hope. 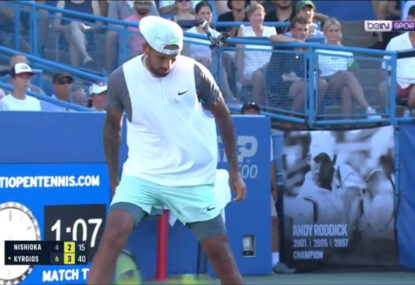 The 'Wild Thing' Nick Kyrgios should be the favourite to win the US Open. The Wimbledon finalist has been impressive ahead of the US…

Things got heated between Nick Kyrgios and Frances Tiafoe in Washington! 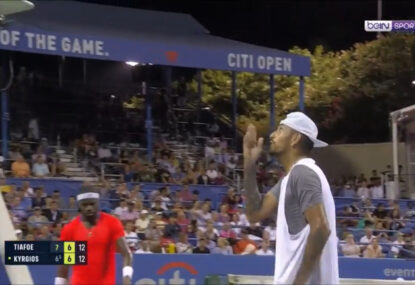