Queensland have staved off a State of Origin whitewash with a 18-12 win over the New South Wales Blues in a thrilling Game 3 encounter at Suncorp Stadium.

The victory means retiring fullback Billy Slater leaves the Origin as a winner in a fitting farewell for the Maroons great, and he was given the man-of-the-match award just to top it all off.

Truth be told, it was a match of so many twists and turns, of so much drama, that words can’t possibly do it justice.

Slater was the first Queenslander to touch the ball off a kick return when he was belted by a Latrell Mitchell shoulder charge, and he was almost the game’s first scorer not long after. A savvy cross-field kick from Daly Cherry-Evans found his captain, but he was ruled to have knocked the ball onto Nathan Cleary’s arms by the Bunker.

Though the commentators were in agreement with the decision, Slater certainly wasn’t, but he didn’t have to wait much longer for his side to open the scoring.

Damien Cook made a superb break down the middle for the Blues, sparking up a 77-metre gain in the set. When New South Wales opted to spread the ball wide on the last, they could only find Valentine Holmes’ grateful arms, and the Cronulla speedster raced away from the slightly comical chase of David Klemmer to score the game’s first try.

From there on, the first half was all Queensland. The Maroons went to the break having had 70 per cent possession and a one-man advantage for the last ten minutes, thanks to James Maloney being sent to the sin-bin for a professional foul on Billy Slater.

Maloney had originally done little more than stop in his tracks as the Queensland skipper chased after a kick, but it was his second contact with Slater after the ball had rebounded off the posts that left Gerard Sutton with little option but to send the five-eighth to the bin for ten minutes. 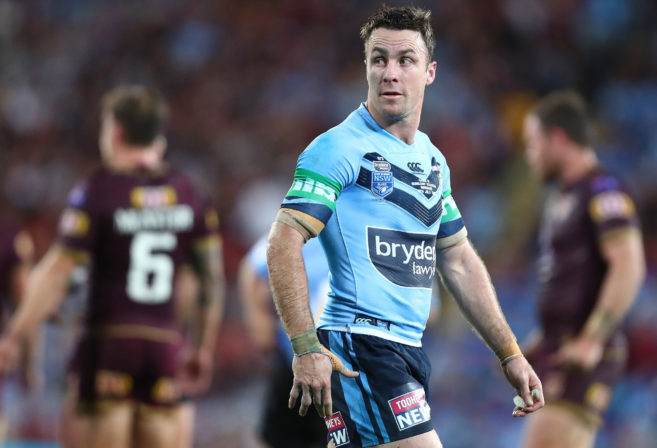 The Maroons duly took the two points, but despite that and their personnel advantage, went into the break down 12-8 after the Blues managed to score twice in the last three minutes.

The first of those was much like Queensland’s opener, Tom Trbojevic latching onto a loose pass to both stop the Maroons from scoring and grab a four-pointer of his own, and with just seconds left on the first-half clock, James Tedesco scythed through a gaping hole in the defence left by Josh McGuire to touch down under the posts and give New South Wales a four-point lead at the break.

It was a decidedly Queensland performance from the Blues, who stopped attack after attack and never had their line breached in the opening stanza.

But, as they always do, the hosts came back, withstanding a New South Wales onslaught and scoring the first two tries of the second half. Holmes grabbed his second of the match with 51 minutes on the clock, crossing out wide after some excellent build-up play from Slater to level the scores.

Cameron Munster then showed his class minutes later by dummying, jinking and fending his way through the New South Wales line before putting halves partner Daly Cherry-Evans away – via Gavin Cooper – to score under the posts and open up a six-point lead.

From there, the Blues looked shot, the enormous defensive effort from the first half clearly starting to take its toll. Even when they managed to make their way into Queensland’s red zone, an uncharacteristic knock-on by Maloney handed possession straight back to the Maroons.

Somehow, some way, New South Wales managed to surge back into the game, back-to-back sets of six only nullified by a superb diving interception from Holmes that looked better suited to a slips cordon than rugby league field.

But even though a Josh Addo-Carr counter-attack almost led to a last-minute New South Wales try, the whitewash was not to be for the Blues, Queensland winning 18-12 in what was surely the most thrilling Origin encounter in recent memory. 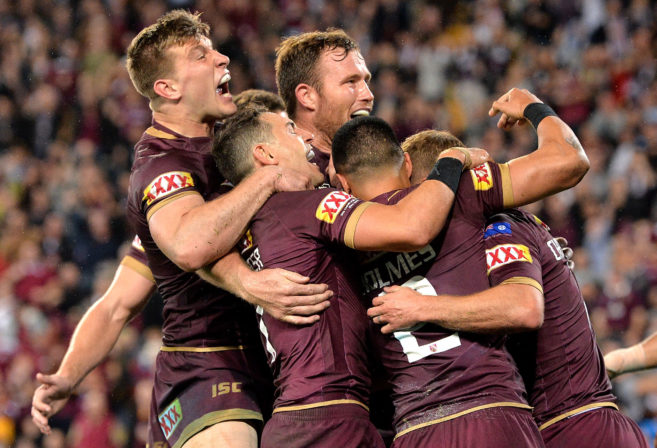 This is normally the part of a match report when we’d list who the best players for each side were, but such was the quality of the game that someone will inevitably be unjustly overlooked.

Slater was officially the best afield, and somehow also picked up the Wally Lewis medal for player of the series, an accolade which felt more lifetime achievement award than genuine reflection of the series given he missed Game 1 through injury.

That’s not a knock on Slater; he was excellent tonight. But he had plenty of help. Munster was terrific and his halves partner Cherry-Evans superb in the latter’s return to Origin. Questions will no doubt be asked about his omission from Games 1 and 2.

For the Blues, wingers Trbojevic and Addo-Carr stood out, as did Cook and Tedesco, the latter of whom in particular might have been bemused to see the Wally Lewis medal awarded to his opposite number.

But the night belonged to Slater, whose performance helped Queensland prove that, while their dynasty has ended, they will never be uncompetitive in the Origin arena.