Will Shimron Hetmyer make it big in world cricket?

If Shimron Hetmyer had been Indian, by now the media would have christened him the next Sachin Tendulkar or Virat Kohli.

However he is not from India but from the West Indies, a team which is not doing well in international cricket. That is mostly responsible for less hype around the dynamic youngster, which ironically may well be the best thing for him.

The under-19 World Cup has seen the rise of many superstars of world cricket. The inaugural edition featured Brian Lara, Inzamam-ul-Haq and Sanath Jayasuriya and all went on to achieve huge success.

A few more U-19 World Cup stars who made it big are Michael Clarke, Harbhajan Singh, Virendra Sehwag, Shoaib Malik, Chris Gayle, Mitchell Johnson, Yuvraj Singh, Brendon Mccullum and David Warner. The West Indies will be hoping that Hetmyer will also be one such mega successful player.

Shimron has a similarity with one more super successful former U-19 player – none other than Virat Kohli. Both are former under-19 World Cup-winning captains. Virat came into prominence after India won the Under 19 World Cup in 2008 and three years later he played for India in the 2011 World Cup.

Interestingly two other players of the same 2008 tournament were Steve Smith and Kane Williamson while Joe Root featured in the 2010 edition. Just 8-10 years later Virat staked his claim as one of the best batsmen in the world.

Shimron was the captain of the U-19 West Indies team which won the world Cup in Bangladesh in 2015-16. The young west Indies team defeated the unbeaten Indian team in the final. Current Indian test wicket-keeper Rishabh Pant was in the Indian squad, captain of which was Ishan Kishan.

Before the 2016 U-19 World Cup, Shimron had also played in the 2014 U-19 World Cup as well, as a player. He then played four first class games before being chosen to lead the country in the 2016 edition. He has half centuries in both the QF and the SF and then in the final he changed his customary attacking style to play a patient 53 ball 23, since the target set by India was just 146.

Junior World Cup exploits ensured he played the Caribbean Premier League and success followed him there as well fast-tracking Selection to the senior team. Shimron is playing apart from T20 cricket, Test cricket and ODI too for West indies, with contrasting fortunes and results.

Interestingly, for an attacking player, Shimron started out playing Test cricket. He has played just six Tests so far including the recent two against India. His first three Tests were against Pakistan and he did not do well without a single 50-plus score, leading to his being dropped against Bangladesh.

However he was brought back into the team after just a single Test and he responded with a sparkling 86 versus Bangladesh. Unfortunately, he did not play well in both the recent Test matches against India. More disappointing was the manner of being out – he seemed clueless.

In T20 he has played just two matches. The first one on his debut against New Zealand he did not get a chance to bat while in the second he scored just 7.

It is in ODI cricket that he has shown promise. He has already hit three ODI tons in just 13 innings and almost hit a fourth in his 14th. Statisticians immediately pointed out that Viv Richards, Gordon Greenidge, Phil Simmons and Brian Lara took 16, 27, 41 and 45 innings respectively to hit their first three tons. Shimron has done it in just 13. 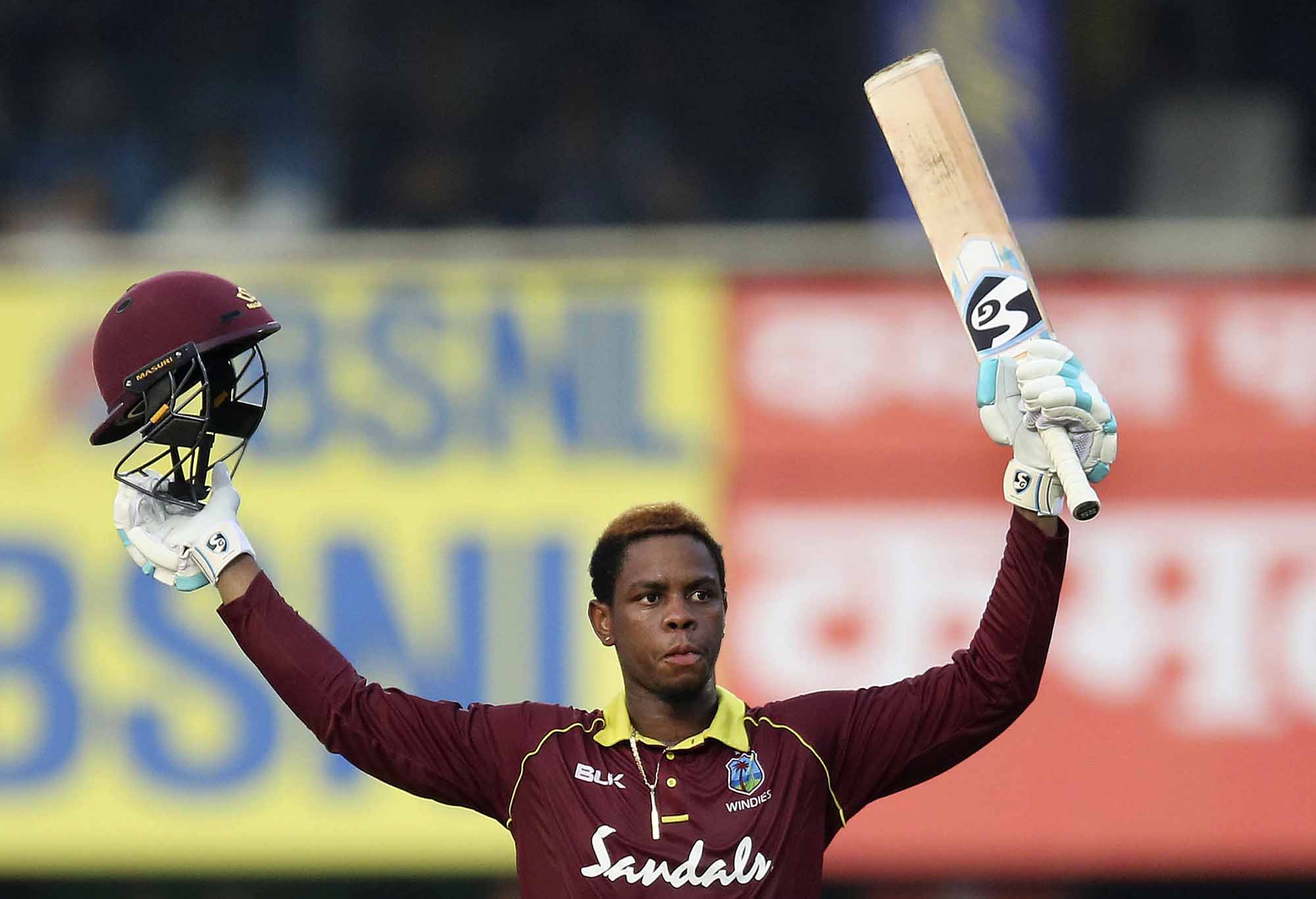 While that would  be a fallacious and unwarranted comparison, what was heartening was the way he went about his batting. In the first ODI he took just 74 balls to reach his 100 with as many as six 4s and six 6s.

There was a gay abandon in his batting and it helped West Indies to reach 322. In the second ODI he threatened to reach his 100 even quicker but holed out when he was at 94. His earlier two ODI hundreds were also very quick and he had taken just 78 and 84 balls respectively. Such attacking batting led Harbhajan Singh to call him the next million dollar baby of the IPL.

A note of caution here. While Shimron’s ODI knocks have been enthralling, the manner of being out left much to be desired. In both the century as well as the 94 he could potentially have won the matches for West Indies. However he was out in an amateurish manner both times. This aspect needs improvement.

Shimron appears to have a cool head as is evidenced by his response to Harbhajan Singh calling him the next million dollar IPL Baby. He says that it is a good feeling to be praised by such a great spinner but right now his focus is only on representing West Indies.

Currently the West Indies team is a shadow of its former self. It would need youngsters such as Shai Hope and Hetmyer to do well consistently. That would be good for world cricket as well.