NFL Week 12 wrap: The Big Easy are no turkeys

For the first time this season, the New Orleans Saints have taken over as the number one seed in the NFC. In fact, they now have the best record in the NFL.

Although the Saints are level with the Los Angeles Rams at 10-1, they take top position on head-to-head results: the Saints beat the Rams in Week 9.

This week the Saints were too strong for the Atlanta Falcons, winning 31-17 on Thanksgiving. It was the Saints’ tenth win in a row, coming on the back of 150 yards rushing and six defensive sacks. The Falcons sit at 4-7, their playoff hopes all but gone.

Thanksgiving is a big football day, featuring some great action on the field and some ordinary turkey costumes in the stands.

A crowd of 92,076 packed the AT&T stadium in Texas to watch the Washington Redskins take on the Dallas Cowboys. At stake was top place in the NFC East.

Washington quarterback Colt McCoy started in only his first game since 2014. He was sacked early on, spilling the ball but luckily it was recovered by his own side. McCoy was also picked off in the the first quarter but atoned in the second with a 53-yard touchdown reception to Adrian Petersen. At halftime, Dallas led 10-7.

Washington hit the lead with a short yardage touchdown to Trey Quinn before a touchdown from a 40-yard reception by Dallas wide receiver Amari Cooper put the Cowboys in front. The touchdown celebration was memorable, players lining up for a basketball free-throw.

The match was blown open when Cooper caught a pass from Dak Prescott around the 30-yard line before shaking free of a tackle and sprinting for a 90-yard touchdown.

The game finished 31-10 to the Cowboys, putting them ahead of the Redskins on head-to-head record in the NFC East.

In the other Thanksgiving match, the visiting Chicago Bears beat Detroit Lions 23-16.

The 32-year-old Chase Daniel made a rare start for the Bears in place of injured quarterback Mitch Trubisky. His nerves were apparent early when he bounded out onto the field minus the rest of his team.

Despite getting sacked in the first quarter and getting absolutely belted on his first run, Daniel showed some pluck, helping the Bears to a 9-7 lead at the half.

The Bears completed the job in the second half, Daniel completing 27 of 37 passes for 230 yards for the match. The Bears are now 8-3, a game and a half in front of Minnesota Vikings in the NFC North.

The Seattle Seahawks faced off against the Carolina Panthers in a cliffhanger in Charlotte.

Trailing by seven in the final quarter, the Seahawks levelled the scores through a David Moore touchdown. A go-ahead field goal was missed by the Panthers and steely-nerved Sebastian Janikowski kicked the winner for the Seahawks with the clock at zero.

Both teams are at 6-5, and although they can’t win their respective divisions, a playoff place is still possible.

Green Bay Packers needed a win to stay in touch with the wild card contenders when they travelled to Minnesota to take on the Vikings in an all NFC North clash.

The Vikings’ scored the first touchdown and celebrated in style – one player was held horizontally like a pole while the rest of his teammates limboed underneath.

Adam Thielen was back in from for the Vikings, gaining 125-yards off six receptions. He now holds the Vikings record for most 100-plus yard matches in a season.

The Vikings are second in their division at 6-4-1, two wins ahead of the Packers.

The Cleveland Browns beat Cincinatti Bengals 35-20 for their first road win of the season.

New England Patriots’ quarterback Tom Brady set another NFL record when his team beat New York Jets 27-13. His 79,416 passing yards in regular season and playoff games is the most in NFL history. 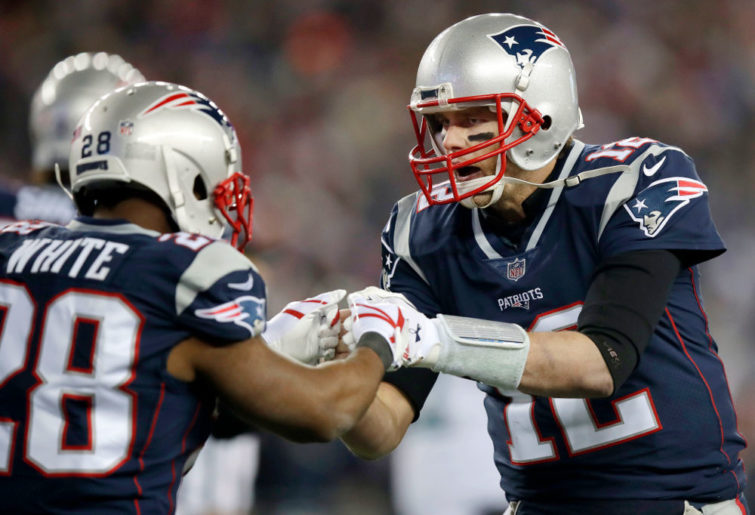 The Pittsburgh Steelers’ six-game winning streak was halted by an improving Denver Broncos, despite a spectacular 97-yard touchdown from wide receiver JuJu Smith-Schuster. The Broncos’ 24-17 win moves them to 5-6 while the Steelers, at 7-3-1, still hold a slim lead in the AFC North.

Thanksgiving week saw the last of the regular season byes. From now on each team has five games until the playoffs.