The Roar
13th December, 2018
0
Join the conversation
2559 Reads
Advertisement
Write for The Roar

If you said that to someone ten years ago, they probably wouldn’t believe you. Even as Starcraft kickstarted an esports revolution in South Korea in the late noughties, many still doubted competitive gaming would ever be lucrative enough to hit the mainstream.

They couldn’t have been more wrong.

Newzoo, an esports market research and data company, expects the industry to rake in a staggering US$908 million in revenue in 2018, an absurd jump from the US$655 million earned in 2017.

Brand investment also increased 48% year-over-year, and by 2021, revenue could reach as much as US$1.65 billion.

You don’t have to be good with numbers to realise that’s some serious money.

While some of this revenue comes from consumers, a big chunk of the dough rolls in from the huge sponsorship deals linked to tournaments, teams and even individual players.

And it’s not just well-aligned brands like Intel, Alienware, Razer and Red Bull who are on board, either: giants like T-Mobile, Audi and Airbus have entered the fray, and it’s only getting more competitive.

Games like Dota 2, League of Legends, Counter-Strike: Global Offensive, Fortnite, Street Fighter and Rocket League are among the popular titles to have established esports scenes, but there are plenty more. 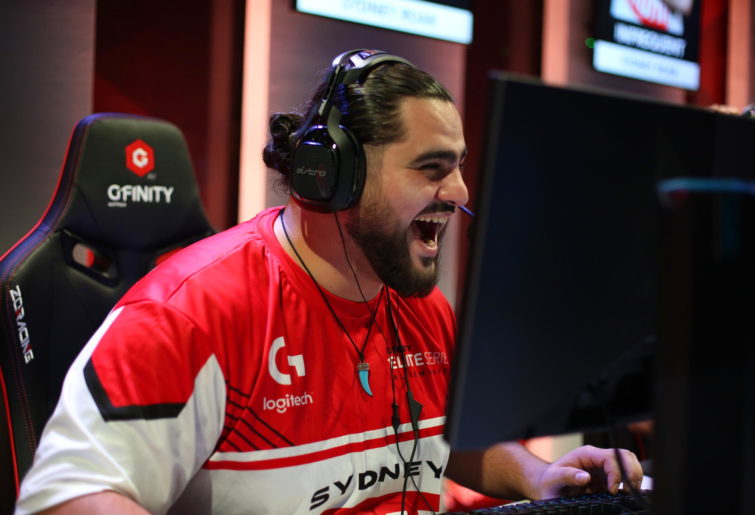 You get it. Esports is a thriving global industry and there’s plenty of cash to be made. The question is: how do people make the leap from hobby gaming to a full-time career?

Becoming a pro gamer is much like aspiring to be any kind of professional athlete. Before you even begin taking the steps to success, you need to make sure you’re willing to put in the hard yards.

If you’re hoping to land a big contract just because you toast your best mate in a weekly game of FIFA, you probably have a better chance of captaining the Australian cricket team.

The by-product of esports being a booming industry is that it’s insanely competitive, so you need to become the best of the best to have a shot at stardom.

Nevertheless, the beauty of esports is that you can start in the comfort of your living room.

It’s virtually impossible to be a pro gamer across multiple titles. Some of the world’s best gamers have been known to switch games during their career, but you’ll only ever be able to stay at the top by focusing all your attention on one game. The pros often practice for 12+ hours a day, so doing that with two games at once… we’ll let you do the math.

Choose a game you’re not just good at, but enjoy. Those two things will often go hand in hand, but you don’t want to be grinding away in a game you don’t even like playing.

Ideally, it’s something you can easily play online against skilled opposition so you have the best opportunity to improve over time.

2. Equip yourself for success

In the cutthroat world of esports, anything that gives you or your team an edge over the opposition is worth its weight in gold.

Quality gear is essential for any gamer worth their salt, especially if you’re playing on PC. Without going bankrupt, invest in quality equipment that’ll ensure you can run your game as smoothly as possible with a high framerate. Don’t underestimate sound, either: in games like CS:GO, a high-end headset is imperative for hearing footsteps and gunshots.

It goes without saying that a successful career in esports hinges on you being a top player. While tournament experience, team cohesion and other factors become involved at the highest level, you first need to put in the hours to ensure you can compete with the best of them.

Just be warned: there’s a reason many call this stage ‘the grind’. Gaming is fun when it’s a hobby, but it can be exhausting when you’re putting in hour after hour in your free time. Set goals, take frequent breaks and make sure you’re in good health, because it’ll take time and effort to improve your game.

4. Surround yourself with better players

Being a pro gamer is about constant improvement. Even if you’re #1 in the world, complacency will see your career fail as quickly as it started.

As such, it’s imperative you constantly strive to work on every aspect of your game. The best way to do that? Play against people better than you. You’re not learning anything by wrecking your little brother 30-0 in a game of Rocket League. Playing someone better than you exposes your weaknesses and gives you a chance to learn some new strategies.

Try and build a network of talented players who you get along with or, in games with online ranking systems, always aim to play those ranked higher than yourself.

5. Be active in the community

Every esport has an active community, and you’ll need to be involved to keep your finger on the pulse. Aside from it being a great way to keep up with news, discuss strategies, make friends and post memes (yeah, we all do it), it’s a chance to make a name for yourself.

Although topping in-game ranking systems will help you get noticed, an active presence in the community will give you a better chance of finding a team.

Check sites like Reddit for community hubs and become familiar with the top Twitch streamers for your chosen game.

These days, many developers and esports organisations actively encourage players to get involved in competitive gaming by running online tournaments open to players from all over the world.

There are several reasons you should enter every tournament you can. You’ll gain valuable competitive experience you would never get from standard online play, and there’s often the added bonus of prize money up for grabs.

Plus, you’ll get the chance to rub shoulders with top-tier gamers and build your case when looking to join a team.

New initiatives, like the Gfinity Challenger Series could even put you directly on the radar of pro teams if you perform well enough.

So you’ve been putting in countless hours, studied match replays, pored through patch notes and worked your way up the rankings. What now?

Once you’ve got the skill to compete at the top level, you’ll need to find a team – even if what you’re playing isn’t a team game. This step is by no means easy, and much of it can come down to who you know and how well you’ve made a name for yourself.

Signing with a team is the moment your esports career can take off – provided you perform, the tournaments, championships, sponsorship and money will soon follow.

8. Have a backup plan

At the risk of sounding cynical, it’s imperative you prepare for the worst-case scenario. Like most things in life, putting all your eggs in one basket can often be your downfall.

A career in esports is an achievable goal if you’re talented and dedicated enough, but it requires a hell of a lot of time and effort. Make sure you have something to fall back on if it doesn’t work out.

While you climb your way to the top, make sure you’re earning enough money on the side and not neglecting your health, friends and family. Balance is important in all aspects of life, and taking a smart approach to your budding esports career will go a long way to determining its success.

Season 2 of the Gfinity Elite Series Australia is on now! Featuring Rocket League, Street Fighter V and Counter Strike: Global Offensive, Season 2 runs from the start of November to December 17.

This article was originally published as “The path to pro gaming: How to climb your way to a successful career in esports” on Techly