When Namibia held their own against England at the World Cup

Namibia played their first ODI in more than 16 years when they squared off against Oman in the final of the ICC World Cricket League Division Two at Windhoek’s Wanderers Cricket Ground on April 27.

It was also the first instance of an ODI being played on Namibian soil, and the hosts made it memorable by clinching the title with their first win, by a comprehensive margin of 145 runs.

Namibia had previously played only six ODIs, all of which were at the 2003 World Cup in Africa.

Having secured associate membership of the ICC in 1992, Namibia’s peak came at the 2001 ICC Trophy as the World Cup qualifier was then known in Canada, where they finished runners-up to the Netherlands after a narrow two-wicket loss in the final, thereby securing their passage to the 2003 World Cup.

Namibia’s ODI journey began on February 10, 2003 at the Harare Sports Club, where they locked horns with Zimbabwe in their opening Group A fixture of the World Cup.

Led by Deon Kotze, they were at the receiving end of a colossal 172 from Craig Wishart, which took Zimbabwe to 2/340. Rain intervened when Namibia were 5/104 in the 26th over, giving the Zimbabweans an 86-run win on the Duckworth-Lewis method.

While the Namibian batsmen showed glimpses of promise against Zimbabwe, that was not the case against Pakistan in their next outing at Kimberley.

After creditably restricting Pakistan to 9/255, Namibia struggled with the bat against Wasim Akram and Shoaib Akhtar, who shared nine wickets between them to bowl the greenhorns out for 84. It could have had been worse, as the score read 9/42 at one point.

Considering that they had forfeited their first game against Zimbabwe in Harare on political grounds, England knew that every game was vital if they were to go past the group stage.

Fresh from a six-wicket win against the Netherlands, they would have hoped to make short work of the Namibians.

Kotze won the toss and decided to field first. Paceman Rudolph van Vuuren – who had debuted against Pakistan and would go on to represent Namibia at the Rugby World Cup later that year – gave his team an encouraging start by taking the wickets of Nick Knight and Michael Vaughan in his first five overs to leave England at 2/43.

Marcus Trescothick (58) and stand-in captain Alec Stewart (Nasser Hussain was ruled out due to a stiff neck) steadied the ship with a third-wicket stand of 78, before the former was removed by the part-time leg spin of 21-year-old Jan-Berrie Burger in the 25th over.

That dismissal gave Louis Burger – unrelated to Jan-Berrie, but older brother of Sarel, who was on ODI debut – his third catch.

Stewart was fourth out for 60 with the score at 159, and this time two brothers did combine for the dismissal – skipper Kotze was the bowler, while his younger brother Bjorn took the catch.

Paul Collingwood and Andrew Flintoff carried England to 4/202 after 40 overs, but both perished in the same over to seamer Gerrie Snyman. Snyman (3/69) later collected a third victim in the form of Ian Blackwell to make the score 7/242.

The final over began with England placed at 7/262. Though Van Vuuren conceded ten runs off it, he struck three times, accounting for Craig White after a breezy 35, Ronnie Irani and Andy Caddick to finish with figures of 5/43 – only the third time a bowler from an associate nation had recorded a five-wicket haul at the World Cup.

Faced with a steep target of 273, Namibia needed a solid start if they were to avoid a repeat of the capitulation against Pakistan. 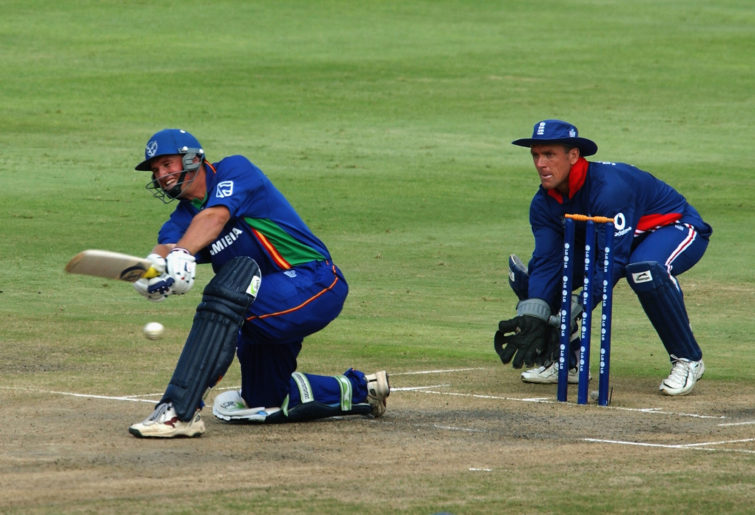 Opening the innings, Jan-Berrie Burger took the attack to the opposition with aplomb. Namibia lost Stefan Swanepoel and Louis Burger cheaply, but that did not deter Burger, who was determined to prove his talent on the big stage.

He was joined by Daniel Keulder at 2/42, and the pair gave England cause for concern by putting together 87 runs for the third wicket.

At 2/129 after 29 overs, Namibia were by no means out of the reckoning. In fact, thanks to Burger’s exploits, they were crucially ahead on the D/L method for a good number of overs, with clouds starting to thicken over Port Elizabeth.

However, Burger’s memorable innings came to an end off the first ball of the 30th over, as a diving catch from Paul Collingwood off the bowling of Craig White sent him back for 85 in just 86 balls, studded with ten fours and a six.

This effectively ended Namibia’s spirited challenge, as the batsmen to follow could not cope with rising required rate, which was now nearly seven runs an over.

Keulder battled for the next eight overs, before getting run out for 46. Snyman was out for a duck off the very next ball, after which Irani (3/30) made inroads in the lower order.

Van Vuuren hit James Anderson for a six off the final delivery, which in a sense was reflective of Namibia’s gritty performance throughout the day. The innings wound up at 9/217, but the Namibians had more than held their own.

Jan-Berrie Burger was deservedly named man of the match, and his 85 remains the highest ODI score by a Namibian.

Namibia endured heavy beatings in their next two matches – by 181 runs against India and by 256 runs against eventual champions Australia – before bowing out with a 64-run loss to the Netherlands.

However, thanks to the resolve shown against England, they had reason enough to be proud.