aussierad
Roar Rookie
11th May, 2019
15
Join the conversation
Advertisement
Write for The Roar

For the fourth time Golden State crushed the dreams of Houston fans. In the immediate tragic aftermath Tilman Fertitta, who paid $2.2 billion to buy the franchise from Leslie Alexander, defiantly guaranteed that James Harden will lead his franchise to championships. Yikes – if I were Paige, his wife, I would be having a little conversation about promises that may prove difficult to keep.

James Harden, a supremely talented offensive player in the regular season, invariably disappears or chokes in the play-offs. Why that happens is somewhat unclear. Perhaps in the spotlight of the play-offs referees actually want to look like professionals and so don’t allow The Beard his usual leeway, such as his patented double step-back, also known as a travel in the NBA rulebook.

It was comical when Harden asked for sympathy and a fair go from the referees after Game 1 of this series, seemingly upset his Oscar-worthy attempt to bait the ref into giving him a foul against Draymond Green didn’t work. This is Harden, who has made his way into the free-throw line more than any other NBA player dead or alive since 2012, wanting a fair go from the referees.

And talking about disappointing, Chris Paul is right up there with James Harden. If the Warriors have the Splash Brothers, the Flop Brothers is an apt description for this pair, arguably the most frustrating duo to watch in the NBA. Paul’s efforts in Game 6, attempting to sell two flops within seconds, was hysterical. 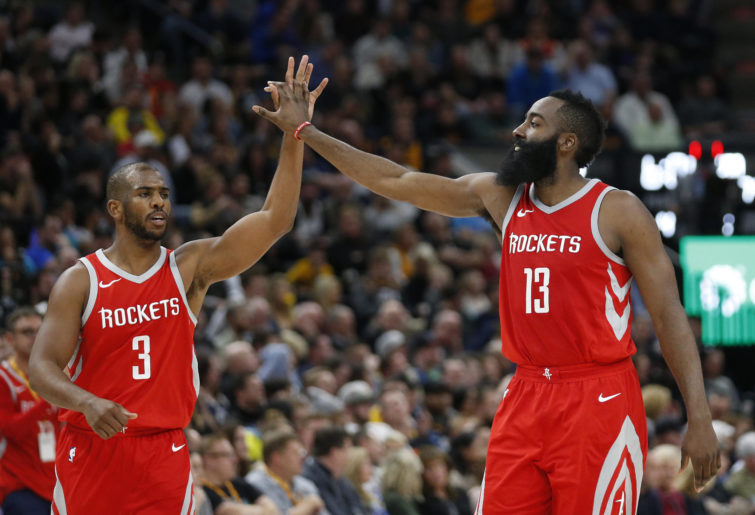 Last year Clutch City fans claimed the Rockets lost – rather than the Warriors won – because Chris Paul tore his hamstring. As Daryl Morey famously said, they were one hamstring away from being 2018 champions.

In 2019 the Warriors conceded a quadriceps (Demarcus Cousins) and a calf muscle (Kevin Durant) and they still could not finish the job. In Game 6 this series, the Warriors emptied their bench and a couple of guys with names I’ve never heard off kept the team in the game, scoring 33 points with Kevin Durant out. Has anyone heard of Quinn Cook, who played 16 minutes?

Once again, a massive choke from seemingly misnamed Clutch City.

The response from the Rockets after a loss against in the play-offs is always entertaining, and this year was no different. Just like Game 7 last year, James Harden walked away from the court without shaking hands with his opponents, and of course there was all the usual bravado. Fertitta said, “We’re going to learn from it, and we’re going to come back next year, and we’re going to kick their ass at some point. I can promise you that”.

Fertitta, whose parents came from Sicily, where scary men wear dark suits, boasted, “I’m a fighter, that’s my culture, and I think the longer that I own this team, they’re going to pick up more of my culture.

“We had [the Warriors]. We should have stepped on their throat the other night and cut their throat. It’s not, ‘Let’s make a few shots and win’. It’s, ‘Step on their throat and let’s take it back to Houston and end it in six’.

“We’ll pick up a few Tilman-isms along the way in the next few years.”

Harden added: “I know exactly what we need to do. We’ll figure it out this summer”. Though he declined to elaborate on exactly how he was going to do that.

So there you have it, folks. The recurring Rockets versus Warriors finals is the gift that keeps giving, and like most NBA fans around the world, we just cannot help but take a little guilty pleasure in the inevitable outcome.