The reshuffle the Aussies must make to win the World Cup

With a convincing victory against their arch rivals at the home of cricket on Tuesday, Australia has become the first team to qualify for the semi-finals of this World Cup.

While the Aussie performances haven’t been flawless, strong top-order batting, hostile pace bowling combined with the typical Australian fighting spirit has made them one of the favorites to lift the trophy.

Looking at the scorecards of the Aussie matches would be enough for any cricket analyst to pinpoint the strength and the weakness of this team.

The openers, Aaron Finch and David Warner, have been superb. In contrast, the contribution of the middle order seems modest. A number of changes in the batting line-up hasn’t helped the cause, and only Alex Carey is contributing consistently.

Likewise, Mitchell Starc and Pat Cummins had done all the hard work in the bowling department until the England game. The superb display of Jason Behrendorff against England has come as a welcome boost, but the form of the spinners – especially Adam Zampa – remains a big concern.

To fix the batting order, begin with Steve Smith moving to No.3.

Smith and Usman Khawaja have shared the first-drop duties. Both are maintaining steady rather than brilliant strike rates. Smith gets my vote because of his greater experience and his greater ability to rotate the strike. Also, he needs a few deliveries to get going, so he often becomes a liability rather than an asset batting further down the order.

Maxwell must bat at No.4 regularly. This is a much bigger call, and it should be a very important part of Australia’s overall batting strategy. 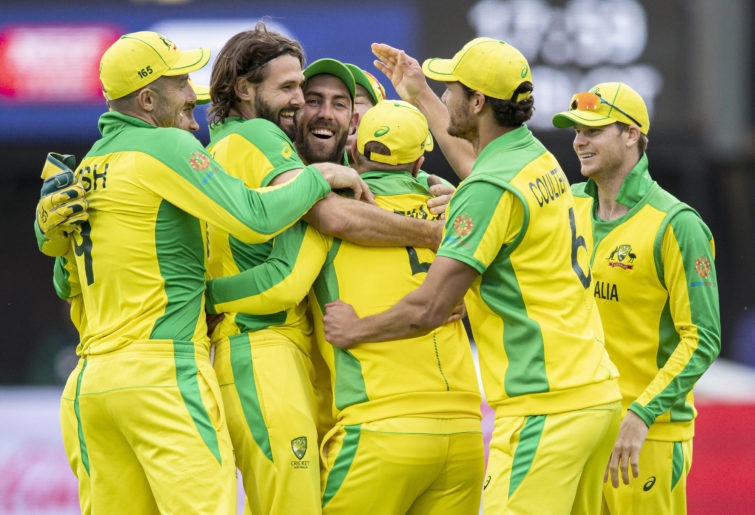 When Australia won their first World Cup in 1987, the plan was for the top three of David Boon, Geoff Marsh and Dean Jones to bat as long as possible. Once in, they were encouraged to carry on until the 46th or 47th over. Any strike rate above 80 was acceptable. It was the duty of the lower-order players like Mike Veletta or Steve Waugh to give the innings the momentum in the last eight to ten overs.

Pakistan tried fairly similar tactics in 1992. It was the duty of the openers – Ramiz Raja and Amir Sohail – plus skipper Imran Khan, who had promoted himself to No.3, and the ever reliable Javed Miandad to give the innings a solid foundation before the stroke-makers Inzamam-ul-Haq, Wasim Akram and Moin Khan would provide the acceleration. Scores of 250 were generally considered defendable.

That mark has now been raised to around 330, and we see an all-out attack approach by teams like England. The idea is for all the batsman in the line-up to go for all-out attack irrespective of the situation of the match.

This approach has worked well against teams like Bangladesh or Afghanistan, but has come under question against stronger bowling attacks, especially while chasing.

Somewhere in between these two tactics lies a third strategy used successfully by Sri Lanka in the 1996 World Cup. The idea was to start very aggressively – trying to take advantage of the field restrictions in the first 15 overs – and then consolidate gradually. Because they frequently started their batting in a blazing fashion, there was seldom much pressure on the middle order regarding the run rate.

Of course, the team needs the right men to execute the plan. And SL had just the right batting line up for this strategy.

In the 2019 tournament, with Australia doing so brilliantly in the first 25 overs thanks to their opening pair, they should be more aggressive during the 25-40 over period, accelerating then rather than the third powerplay in the last ten overs.

To implement this plan, they need Maxwell at No.4 on a regular basis. If things don’t go according to the plan, then they can consolidate in the last ten overs or so.

Of course, this brings us to the question of who will bat at No.5. This role should go to one of the accumulators, either Khawaja or Shaun Marsh. It’s important for the designated player to understand this less glamorous role.

Carey comes in at No.6 then Marcus Stoinis at No.7. Australia needs Stoinis, at least for the sake of the balance in the team.

Stoinis’ batting in this tournament hasn’t been brilliant, and the solution is simple enough – Carey should come ahead of him at No.6. In fact, Carey can come at No.5 if the top four can carry on until the third powerplay.

My suggested top seven is therefore Finch, Warner, Smith, Maxwell, Marsh or Khawaja, Carey and Stoinis – the perfect batting order to accelerate through the middle part of the innings.

As of today’s date, men’s ODI cricket has witnessed 54 bowlers take at least four wickets on debut. Eight of these performances have come on Australian soil, with the first back in 1979-80 and the latest in 2014-15. Here is a look back at those instances. 5/21 by Tony Dodemaide (Australia) vs Sri Lanka, Perth, […]