State of Origin is over for another year, and for the second year in a row it is New South Wales who are victorious.

The Blues won their first live decider since 2005, and first on home soil since 2004 after stealing a stunning and dramatic 26-20 win after very nearly throwing away the series in the final ten minutes.

And if there was one man who deserved all this glory, it’s the halfback – Mitchell Pearce – who for so long had been the target of so much criticism and ridicule from both sides of the Tweed during the state’s darkest days.

After sitting out the 2018 series due to injury and being considered for selection in the first two games this year only to rule himself out with injury, the Newcastle Knights captain earned a recall after Nathan Cleary was ruled out due to an ankle injury sustained in Game 2.

And he made the most of it, setting up the match-winning – and ultimately series-winning – try when he threw the riskiest pass of his life to Tom Trbojevic, who then set up Blake Ferguson to run down the eastern wing before throwing the final pass to James Tedesco.

The rest – as they say – is history, as he then touched down to give the Blues a 24-20 lead with less than a minute remaining. 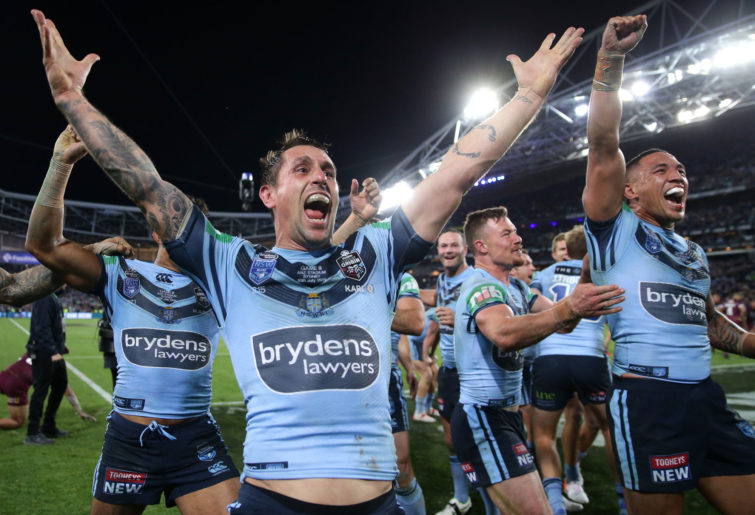 After it was sent to the bunker for adjudication, where the green light was given, the whole state was sent into delirium as the reality of consecutive series victories started to sink in.

Earlier, the Maroons started the stronger side, with Felise Kaufusi scoring the first try inside the first 15 minutes before a late Paul Vaughan try for the Blues saw the scores level at 8-all at the half time break.

Tries to Tedesco and Damien Cook saw the Blues take a 20-8 lead, and entering the final ten minutes it appeared they had the series well and truly won.

Or so they thought.

The Maroons then threatened a huge comeback when they scored back-to-back tries through Josh McGuire and Josh Papalii to level the scores at 20-all with three minutes to play.

Any thoughts of this happening were ultimately extinguished thanks to the heroics of Pearce, Ferguson and then Tedesco, who took out the Wally Lewis Medal for being the best player throughout the series.

James Maloney then converted the try after the final siren to give the game the final score of 26-20 in his state’s favour.

It marks the first time since 2004-05 that the Blues have won consecutive series, ending a run of seven consecutive Game 3 losses when it had been 1-all.

It is also the first time since 2004 that they have won a home decider, after having their hearts broken in 2006, 2008 and 2013. In all three of those years they won the first game under a first-time coach, those coaches being Graham Murray, Craig Bellamy and Laurie Daley respectively.

Fifteen years after Brad Fittler led his state to glory at what was then known as Telstra Stadium in 2004, he has now led them as coach to two State of Origin series victories in as many years after taking over from Laurie Daley at the end of the 2017 series.

After winning his first series as coach last year with victory inside the first two games, this year he had it much harder.

The Blues lost the series opener 18-14 in Brisbane, during which Latrell Mitchell was sin-binned at a crucial stage during the second half of the game, which they started up 8-0.

A length-of-the-field intercept try to Maroons winger Dane Gagai saw the Maroons draw first blood before the series headed to Perth, where Optus Stadium would host the interstate battle for the first time.

Fittler made the huge call to drop the struggling Mitchell from the side but it was the rest of the Blues that made a huge statement in the west, recording their second-biggest win in Origin history with a 38-6 romp, setting up a grandstand finish.

Finally, in front of their home fans they overcame a slow start and a furious fightback from the Maroons, to stand tall and successfully defend the shield that has eluded them for the most part of this century.

While they’ve only won two series in a row – and are unlikely to ever match the Maroons’ record of eight in a row set between 2006 and 2013 – it vindicates the board’s decision to move Laurie Daley on at the end of 2017 after he oversaw four series defeats in five years.

At the very least he was able to end the Maroons’ dominance with a series win of his own in 2014, but that was as good as it got.

Under Fittler they’ve rediscovered the aura that saw them dominate the Origin arena in the middle part of the noughties before the darkness set in, prompting Brian Canavan – ironically a Queenslander – to fix the state’s wide range of issues from the top down.

His forensic investigation brought about an overhaul of the state’s programs including a dedicated coach that would have no connection with an NRL club and a Centre of Excellence that was built adjacent to ANZ Stadium, which will be closed for renovations starting halfway through next year.

Before that, it will host the first game of next year’s series before Game 2 is played at Adelaide Oval for the first time, with Brisbane’s Suncorp Stadium to then host the decider.

Let the celebrations begin in New South Wales, while above the border millions of Queenslanders will be drowning their sorrows as they contemplate a rare extended period without that treasured shield which they kept for nearly a decade.