It was his 16th Grand Slam title and only Rafael Nadal with 18 and Roger Federer with 20 are ahead of the great champion. With the form and fitness Novak is showing, it seems quite likely that he will overtake both Rafa and Federer in tally of Grand Slam titles.

While this is a metric that gets brought up repeatedly when discussing the ‘best ever’, what about weeks at Number 1?

As mentioned above, Novak has 16 Grand Slam titles, compared to 18 for Rafa and 20 for Federer. Rafa Nadal leads with 34 Masters 1000 followed by Novak with 33 and Federer with 28. In number of tournament wins only two players have crossed 100.

Jimmy Connors is at 109 and Roger Federer is at 102. They are followed by Ivan Lendl with 94, Rafa Nadal with 82, John McEnroe with 77 and Novak Djokovic with 74. In year-ending Number 1, Pete Sampras heads the list at 6, while Novak is at five with Connors and Federer. Rafa is at four with John McEnroe and Ivan Lendl.

Can Novak overtake them? Let’s have a look at the present position and try to look ahead as well. At present he is at week #260. To equal Connors and Lendl, he has to remain Number 1 until 9th September and 23rd September respectively. 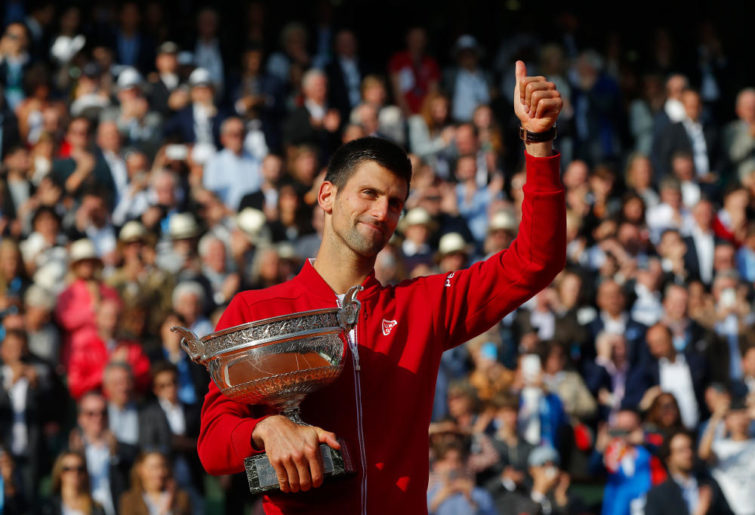 The way the big three are playing coupled with the inconsistency of the youngsters can lead us to safely assume that the only threat to Number 1 is from Nadal and Federer. Now, until 23rd September 2019, there are three important tournaments, Canadian Open, Cincinnati and the US Open.

Novak had played all three and will be defending 3045 points, since he had lost in the third round at Canadian Open (to Tsitsipas) and was champion at both Cincinnati and the US Open.

Federer will be defending just 780 points as he had skipped the Canadian Open, lost in finals at Cincinnati and crashed out in fourth round of the US Open. Rafa on the other hand had won at Canadian Open and had reached the semi-finals at the US Open where he had opted out due to injury.

He had not played at Cincinnati and therefore he will be defending 1720 points.

Prediction; This is easy. Since Novak has a humongous lead of 4470 points and he is probably more comfortable on hard courts than even grass where he has won five Wimbledon titles, I expect him to do well.

He will comfortably continue to be Number 1 until September 23, 2019 and that would mean that he overtakes Connors and Lendl to be Number 3 on the list of weeks at Number 1.

At Paris he became World Number One again. He therefore needs to defend a healthy 2500 points. Federer had identical results at Shanghai, Paris and the WTF, losing in semi-finals in all the 3. He also won at Basel.

Therefore he will be defending 1120 points (360 + 360 + 400). Now Rafa’s is interesting. He will be defending Zero points and thats a big advantage for him ensuring he certainly gets back to Number 2 at least and makes a push for Number 1 as well.

Hard Courts being Novak’s forte he will hold on to the Number 1 ranking until January 13, 2020 and overtake Pistol Pete’s 286 weeks at Number one. This will also mean that he has completed more than a year at a stretch as Number 1 and will also tie Pete Sampras’ record of six years ending Number 1. He is likely to have Rafa breathing down his neck for the numero uno spot.

To overtake Roger’s 310 weeks at the top, Novak needs to stay as Number one until 6 July 2020. So we need to look at tournaments starting from Australian Open and ending with Queens or Halle.

Curiously after his stirring exploits in second half of 2018, Novak had an average first half of 2019 though he started very strongly by winning the Australian Open with a straight sets domination of Rafa.

Federer on the other hand lost in the fourth round at the Australian Open, lost in the final at Indian Wells, in the quarter-finals at Madrid, Italian and in the semi-finals at French Open. He also won at Dubai and at Halle.

Rafa after reaching the finals of the Australian Open reached the Quarter-finals at Indian Wells. He lost in second round at Mexico, skipped Miami and came back for the clay season which he was expected to dominate.

Surprisingly he did not as per his high standards though he won the most important French Open. He bowed out in three consecutive tournaments namely Monte Carlo, Barcelona and Madrid while he won the Italian Open. He therefore has 1200, 180, 360, 360, 180, 1000 and 2000 to total 5280 points.

Novak needs to defend 4635 points. This is tough but Rafa’s need to defend 5280 points is tougher. Ultimately performances in the Masters and the two Grand Slams could decide.

No predictions here. It is not known if Federer will play more clay court tournaments next year. if so he will be at an advantage as he had not played most of them in 2019. Rafa if he gets into beast mode could storm back to Number One spot.

However with a good clay court season Novak too could well ensure he continues as Number One right up until Wimbledon which will ensure he overtakes Federer and then sets his own record which could well remain for many many years.