The 2019 Rugby World Cup quarter-finals continue as Wales and France meet in this all-northern hemisphere knockout tie at Oita Stadium.

This is just the second time the sides have played each other at a Rugby World Cup. The only previous meeting was the 2011 semi-final in Auckland where France edged a tight game 9-8.

The French went on to lose the final by a single point to the All Blacks and, in doing so, suffered their third defeat in a World Cup final.

The semi-finals is the closest Wales have been to the Webb Ellis Cup having also lost at the same stage to a rampant New Zealand in 1987.

Sunday will be the 98th clash between these fiercely proud nations. In recent years, Wales have had the measure of France, winning seven of the last eight encounters. But the agony of 2011 has not been forgotten.

Former player and current backs coach Stephen Jones insists the heartbreak of eight years ago can act as motivation for the current squad.

“It’s great fuel to drive you forward to achieve your goals,” he said.

“This is a different group of players, some were involved that day but the vast majority weren’t.

“You look at the recent games against France and the boys have had some good success.”

In their last meeting – a Six Nations fixture eight months ago – Warren Gatland’s men fought back from 16-0 down at the interval to win 24-19. A victory that set the Welsh on course towards an eventual Grand Slam.

Simple but effective tactics has led to consistent performances. The Welsh have been as solid as a stick of Porthcawl rock so far in this competition, but they will need to step it up a gear.

Wales came through a testing second half against the Wallabies and completed the group stages with a perfect record. Japan are the only other side who won all four of their pool matches.

Jacques Brunel’s France managed three wins out of three but their final group game against England was cancelled due to typhoon Hagibis.

Despite qualifying from the ‘pool of death’ in second place – they collected fewer bonus points than England – results do not tell the whole story.

France laboured through the pool stage and were guilty of letting substantial leads slip against Argentina and Tonga. They probably could have done with the run-out against England as preparation for this step up in quality.

However, veteran fullback Maxime Medard insists previous performances will be irrelevant against Wales.

“We have won, with a little difficulty, but we won and that’s what’s important,” he said.

“But in any match, in any competition, we are capable of playing well enough to win.”

France are capable. They have some superb individual talent. They enjoy a broken field and will be looking to capitalise on loose play. Wales will know the dangers. But they will also know that France look disorganised and short of fitness. Then, there is the in-fighting.

It just wouldn’t be a major sporting event without rumours of a French mutiny. Media reports last week that captain Guilhem Guirado had fallen out with coaches Jacques Brunel and Fabien Galthie were, how you say? Typique.

However, as strange as it is, fractiousness does seem to have a galvanising affect on Les Blues.

The Welsh are favourites to win but the French are happy to play the underdogs, few sides rise to an occasion better.

Team news
After making 13 changes against Uruguay, Warren Gatland has reverted to the same starting team that defeated Georgia and Australia.

Jonathan Davies, Dan Biggar and Hadleigh Parkes have all been passed fit to play for Wales.

Biggar’s involvement was in serious doubt after he suffered separate head injuries against Fiji and Australia. The flyhalf’s inclusion is a boost for the Welsh, who also have George North available after recovering from an ankle injury.

Justin Tipuric has been given a back-row place alongside Aaron Wainwright. Alun Wyn Jones will equal Brian O’Driscoll’s caps mark of 141 Tests.

France have made five changes from the side that narrowly defeated the Tongans last time out.

Against Wales, this relatively inexperienced French team will rely on their senior players and leaders such as with Guirado, Louis Picamoles and Maxime Medard.

The starting side consists of 14 players from their opening World Cup win against Los Pumas in Round 1. The only change is Bernard Le Roux coming into the second row.

French backs Antoine Dupont and Damian Penaud have been passed fit to play and are included in the starting line-up.

Exciting winger Alivereti Raka has been left out of the 23, despite scoring tries against the United States and Tonga.

The France front row of Jefferson Poirot, Guilhem Guirado and Rabah Slimani start together for the 16th time – a French record in the professional era.

Prediction
Hopefully yellow and red cards won’t be a major factor again, but the amount shown in this tournament surely increases the possibility of a repeat of 2011. If Wales execute their tactics and stay disciplined, they should book a place in the semi-finals. 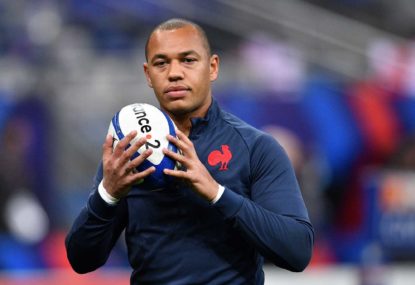 England have won the Autumn Nations Cup final in the most dramatic circumstances.

Fourth in the Six Nations Championship with a rather mediocre finish for 2019, any Les Bleus fan hoping that France could reproduce their results of 2010, when they won the grand slam, or of 2011, when they went all the way to the finals, would be disappointed.