Recent years have seen Australian pitches descend in to sameness, with each surface baked identically hard and flat thanks to the environmental devastation of mankind’s greatest existential threat, T20.

But despite studying endless days of play on these predictable surfaces, one thing remains; Australians still have no idea about pitches.

This nation’s desire to exceedingly survey 22 yards of lawn is a pastime that has existed since time immemorial, which is weird because after 200+ years of intense study, you think we’d at least know something by now.

Whether at a local level or watching on telly, and whether a professional or simply enjoying a delightful afternoon lidding your three year old, if you’ve ever looked at a pitch and used vague terminology to claim you know how it will behave, you’ve blatantly lied.

From the wide-ranging “it might do a bit” to wilfully inviting England to bat at The Oval on a glass bench-top, this nation has lost its way so seriously that even Tim Paine is banned from making decisions at the toss.

Not even the sanctity of Christmas is immune.

As soon as the last pudding is consumed, uncles will be pressing their fingers down on backyard strips and declaring “she’s spongy, should seam”, not realising they are a) actually touching the trifle because they’re plastered, and b) crying for help.

But never fear, my battling countrymen. Let me – a fellow illiterate – guide you with some vague, unenforceable terminology:

“Looks a road”
A colloquial term for any pitch found with an Extinction Rebellion protestor glued to the surface.

“Absolute feather-bed”
A pitch assessed by neuro-scientists as occupying an undeniable power of somnolence so strong that it can only found in the deepest dream state of the human subconscious, or when watching Alastair Cook.

Who needs money when we got ‘feathers’? (Photo by Morgan Hancock/Action Plus via Getty Images)

“Raging green top”
Anything exhibiting signs of nourishment and green growth. With the nation currently gripped by drought, only applicable when there’s a lettuce leaf on a good length.

“She’s a bunsen”
Last spun when petrol was 78c per litre.

Previously referred to the SCG wicket before Sydney became embroiled in a tit-for-tat culture war with Melbourne and commissioned a surface to stage the Australian Open.

Recently heard with Trevor Hohns considering a second spin option, who on current statistics would be the statue of Richie Benaud.

“It’s a new ball wicket”
A surface that provides the opening quicks with brief pause from the spectre of stress fractures. Used to apply to the Pink Ball test at Adelaide before a recent graveyard match where one day’s play saw Steve Smith tally 7000 runs.

This was followed by other incredible feats of run accumulation such as David Warner’s 335, and the most unfathomable of the game, Shaheen Shah Afridi’s 1.

“Lightning quick”
Anywhere a ball has wildly sprung off the surface anytime in the last two years. Regularly heard in Perth, and most recently at Greystanes Number 2, but only because it pitched on a sprinkler.

“Tennis ball bounce”
Usually occurs when a pitch has lived the life of a Hollywood child star; once brimming with vitality and promise, but now a haggard version of it’s former self because of chemicals and over-scheduling. An excellent term for covering up your own shortcomings as a bowler.

This ensures the “slow carry” is blamed on the surface, and not because your 89km pies are hitting the deck with the same force as cake frosting oozing from a piping bag.

“Fast and true”
A surface considered trustworthy. This can be because of the bounce, or because it doesn’t work for one of the major four banks. 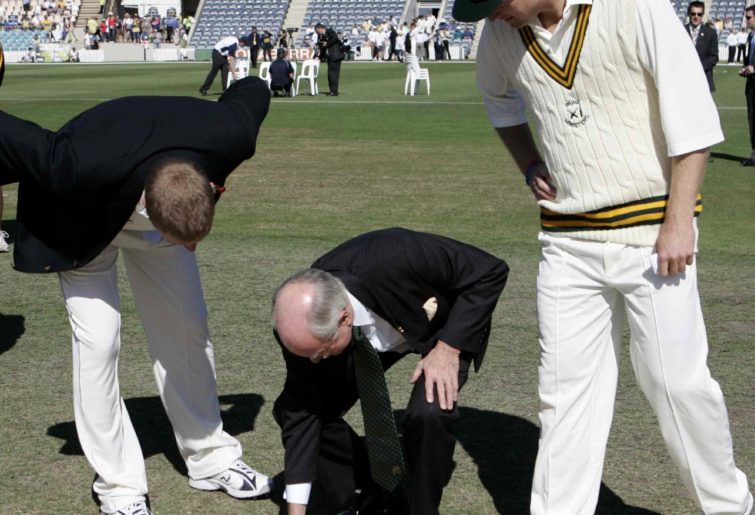 Most commonly heard on Astro-turf and at the Gabba, a pitch enthusiastically crowned by Shane Warne as “the best in the world”, but only after he heard it was “firm” and “shaved”.

“A sporting pitch”
The unicorn of modern cricket. A sporting pitch is considered such as it produces five entire days of perfect balance between the two most important aspects of the game, that being broadcasters and advertising.

“It’s up and down”
No longer a common trait among modern pitches. Last heard on old and forgotten surfaces, like uncovered pitches and Hobart.