The best of Peter Siddle

Peter Siddle has been one of Australia’s most reliable fast bowlers over the last decade.

Siddle has represented Australia in 67 Tests, 20 ODIs and two T20Is between 2008 to 2019. He has firmly cemented his spot in Australian cricketing history and in the memories of the Australian public on many an occasion.

On December 29 – Day 4 of Australia’s Boxing Day Test against New Zealand – Siddle announced his retirement from the international game in front of his home crowd at the MCG. In honour of his illustrious career, here’s a recap of some his finest moments.

January 6 and 7, 2002 at Stewart Oval, Victoria
On this date, Siddle received his first ever five-wicket haul for Victoria in the U17 National Championships against South Australia. In this match, Siddle earned figures of 5/16 from 12.1 overs. Also during this carnival, Siddle achieved Victoria’s all-time best figures of 11/47 in another match, also against South Australia. Due to his good performances in this junior competiton, Siddle was rewarded with game time for the Victorian Sheffield Shield and one-day teams as well as a spot in the Australian cricket academy in 2003.

March 15 to 19, 2008 at the Sydney Cricket Ground, New South Wales
Going into the 2007-08 Sheffield Shield final against NSW, Peter Siddle’s name had been thrown about for a possible debut Test. Blues skipper Simon Katich won the toss and elected to bat. For the match, Siddle took nine wickets with figures of 5/66 and 4/101. He picked up vital scalps such as international players Phil Jaques, Phil Hughes, Brad Haddin, Beau Casson, Michael Clarke and Brett Lee. New South Wales went on to win the match by 258 runs but Siddle’s performance helped earn him a Test debut later that year against India. 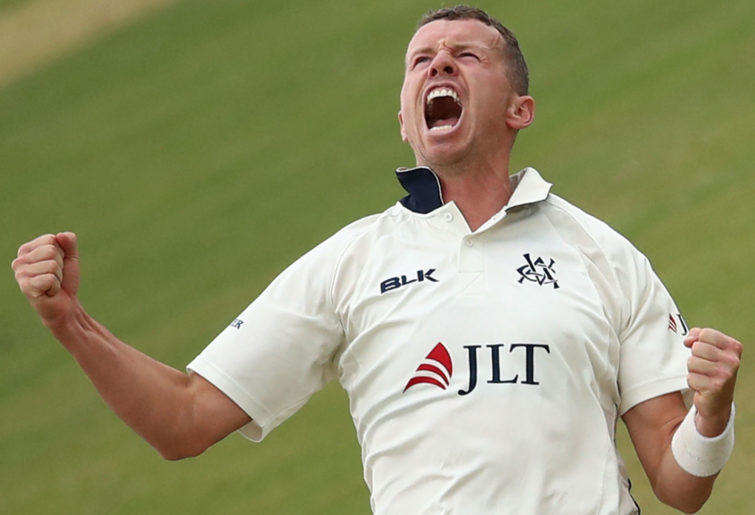 November 25, 2010 at the Gabba, Queensland
Peter Siddle was representing Australia in his 18th Test against England in the series opener of the Ashes – coincidentally his 26th birthday. Australia were put into bowl on Day 1 by captain Ricky Ponting and got off to an ideal start, dismissing opener and captain Andrew Strauss for a three-ball duck via bowler Ben Hilfenhaus.

Siddle was bowling well and got Paul Collingwood out for four and Kevin Pietersen for 43. On the third ball of the 65th over, Siddle took the wicket of Alastair Cook for 67. On the very next ball, Siddle got yet another wicket, this time clean-bowling wicketkeeper Matt Prior.

Siddle had the chance to get a hat trick on his birthday. The full 35,000 people in the crowd were on their feet, screaming at the top of their lungs as he began his run-up to bowl to Stuart Broad. And as fate had it, he got Stuart Broad that very next ball LBW.

Siddle ended the innings with his best Test figures of 6/54. This Ashes birthday hat trick has become a thing of legend and will always be remembered as one of the best hat tricks in the history of Australian Test cricket.

Victorian skipper Matthew Wade won the toss and decided to bat. Victoria put on a first-innings batting masterclass as both Rob Quiney and David Hussey scored centuries, and the Vics ended up declaring on 6/534.

Siddle skittled SA for 175 in their first innings and eventually led Victoria to victory by an innings and one run. This remains Peter Siddle’s best first-class figures.

Peter Siddle’s international career will be remembered. Between 221 Test wickets at 30.66 and eating up to 15 bananas a day, he has left a mark on the international stage for years to come.