But while we’ve almost recovered from the selection of Chadd Sayers, can Aaron Finch’s men complete the nation’s rehabilitation by winning some contractually obligated white-ball games in the middle of the night?

South Africa may be decimated by retirements, politics and Kolpak – a deal where talent is shipped to England at no cost in exchange for putting up with Kevin Pietersen – but the team is still a stiff proposition at home that packs plenty of dangermen, such as…

Cameramen
As our two years of therapy attests, South Africa’s host network is tied to a unique broadcast deal whereby it is obligated to telecast all Proteas home matches as a front to incriminating the visiting team at all costs.

It is a condition they have filled with aplomb, with Jos Buttler the latest to be busted while unleashing a profanity-littered, fat-shaming tirade towards Vernon Philander, presumably because the seamer refused to babysit his kids.

Prior to this was the 2018 Australia series, with a particular incident revealed by tipped-off directors that resulted in the visitors falling somewhat short of tour expectations by returning home with no trophy, no captain and no national dignity.

So ruthless on uncovering crime, some believe South African television directors may even have been responsible for revealing Hansie Cronje’s deal to throw a match for $5000 and a leather jacket. However, footage of the captain taking guard as The Fonz has since been misplaced.

Crowds
South Africa is a country of intemperate extremes, a place where small venues and the thin oxygen of the highveld combine to surge speed guns and run rates to levels almost as prolific as the flow of ICC demerit points.

Funnily enough, this hostility extends to crowd interaction, as witnessed in England’s current tour. Some of the feral invective flying over the fence has been abhorrent, and frankly after what was said, it’s no wonder the crowd abused Ben Stokes in reply.

While not all spectators in the Republic are hostile, there is a small minority that love to interact with the players for a quick chat, an autograph, or to simply accompany them off the ground while wildly gesticulating together like two old dudes arguing over chess.

Yep, whether its Merv Hughes at the Bullring or berating David Warner up the race, one thing is for sure when it comes to South Africa cricket supporters: they’re almost as rabid as their… 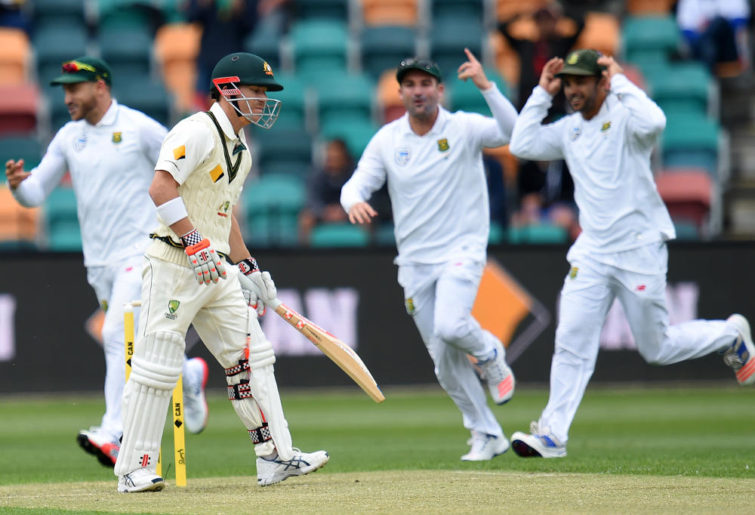 Administrators
Returning to a country of its greatest cricketing crime will see Australia peppered with a multitude of hostility and inevitably-passe sandpaper jokes, and that will be just from the host body’s CEO, most probably from behind a Sonny Bill Williams mask.

However, thankfully he has implored local fans to show respect by minimising abuse strictly to when Australia are on the field. Luckily this will afford Finch’s side the respect to concentrate on minor hurdles to winning matches, such as…

South Africa
Once a blockbuster clash of world cricket’s titans, this series sees Australia and South Africa meet in respective states of transformation.

One team is shedding its tag as a belligerent provocateur led by a ball-tamperer, whereas Australia is trialling two spinners.

In fact, some insiders claim this current Proteas team is in such overhaul that Australia could’ve named a cheap squad of players already touring the country, but regrettably I’m a Celebrity, Get Me Out of Here had already ended.

Even with promising performances against England, many reckon South Africa’s glory years are over, meaning we’ve seen the last of an all-powerful side with an elite ability to chronically fail at inopportune moments. It’s a shame, and world cricket is worse off.

But despite the inexperienced line-up, the visitors will have their work cut-out against a side still boasting world-class names like Kagiso Rabada, Quinton de Kock and Faf du Plessis, the latter who resides on an open-ended, rent-free lease inside Australia’s head.