Can Georgia shock Wales in Llanelli?

Georgia have a huge opportunity on Saturday to perform well against a struggling Wales squad. They are looking to prove a point that they deserve to be at this level and must show patience, control and organisation to beat their higher-ranked opponents.

Finishing chances
Georgia need to score early points and take early chances. Close to the line, they must show composure and use their forwards to go in tight and score. Levan Chilachava in last year’s Rugby World Cup scored two tries in such fashion with a pick and drive.

Georgia don’t have much firepower out wide so they can’t afford to be impatient and spread the ball too often. If they want to be competitive, they will need to score many more points than in their last two games, only seven in total.

Handling errors
In last week’s game with England, Georgia made 17 handling errors that gave their opponents attacking opportunities against an unset defensive line. An example of this was just before halftime when Shalva Mamukashvili dropped a poor pass from Gela Aprasidze, England then regathered and went wide looking to exploit Georgia’s scrambling defence.

As shown above, England had a one-man overlap on the wing. The ball ends up getting to Jonny May who makes a break down the wing but Akaki Tabutsadze covers well and tackles him just short of the 22-metre line.

Although they weren’t hurt on the scoreboard on this occasion, Georgia must cut down on their handling errors, otherwise scoring opportunities will arise for Wales. They must be more like Argentina who only made one handling error against New Zealand last Saturday night.

Georgia must minimise their error rate if they are to get a good result. Another example of the pressure they create for themselves through handling errors was against Scotland in their first trial match on October 24.

Off the kickoff, Soso Matiashvili catches the ball and is hit hard by the defensive line and drops it. Ali Price gathers for Scotland and, following a penalty, they score about ten phases later through a driving maul.

Tight forward running and controlling possession
Georgia needs to go back to their traditional style of play, which was to dominate the set piece, control possession, slow down the pace of the game, and use tight forward carries to gradually narrow the opposition’s defensive line.

Under coach Wayne Pivac, Wales have a tendency to cluster their defensive line. Georgia can expose this through compact forward carrying which will gradually narrow Wales’ defensive line, and then they will be able to pass the ball wide to the fast, hard-stepping winger Akaki Tabutsadze – who scored a brilliant try against Scotland in their first trial game before the Autumn Nations Cup.

Georgia also used tight forward carries effectively in the lead-up to their first try against Wales during last year’s Rugby World Cup match. Hopefully, Vasil Lobzhanidze starts at scrumhalf against Wales as in the past he has sniped effectively, drawing in outside backs and putting away wingers and floating back rowers on the flanks in their pod set up.

Below, he puts Shalva Mamukashvili through a gap after sniping and drawing in Alun Wyn Jones and Josh Navidi, leading to Georgia’s first try.

On another occasion, depicted in a previous video, Lobzhanidze puts Akaki Tabutsadze through a hole on the flank after a good tight set up by the forwards. If Georgia can gradually narrow Wales’ defensive line in this manner and then expose their flanks through Lobzhanidze’s sniping, they will find plenty of points out wide.

Scrum
The bread and butter of the Georgian forward pack is the scrum, arguably the best in the world. It has been the team’s main weapon ever since their formation. With Beka Gigashvili at tighthead and Jaba Bregvadze at hooker, the scrum will be a handful. In the 2019 Rugby World Cup, Georgia earnt five scrum penalties against Wales, including one when they only had seven men in the pack.

One of those penalties led directly to a try. In this instance, Jaba Bregvadze and Levan Chilachava drove through and put the Welsh loosehead under immense pressure, resulting in the penalty that facilitated Chilachava’s eventual five-pointer to the left of the goalposts.

Likewise, against Uruguay, Guram Gogichashvili drove through the opposing loosehead to earn a penalty.

If the Georgians can continue to dominate at scrum time it will give them an opportunity to kick three points, adding scoreboard pressure and give them more rolling maul opportunities close to the line.

Georgia are a talented side looking to prove a point: that they deserve to be at this level. The next step after their disappointing performance last week is to get a good result against Wales on Saturday night. They can do this through tight forward running, few handling errors, discipline, controlling possession and dominating at scrum time.

If the Georgians can execute in these basic fields they will give themselves every opportunity to win.

Why Georgia deserve to be in the Six Nations

Georgia’s rise in rugby over the past 20 years has been substantial.

Why Georgia deserve to be in the Six Nations

Australia vs Georgia live stream, TV guide: How to watch the Rugby World Cup online or on TV

The Wallabies are set to play their fourth and last pool match of the 2019 Rugby World Cup tonight against 13th-ranked Georgia. Below you’ll be able to find all the information you need for catching the game on TV or streaming it live online.

Australia vs Georgia live stream, TV guide: How to watch the Rugby World Cup online or on TV

The Wallabies will play their final pool match at the Rugby World Cup against Georgia on Friday evening, with passage to the quarter-finals already all but locked in. This is The Roar’s full guide to the game. Kick-off in the fixture is set for the slightly later, but still manageable time of 9:15pm (AEDT) on […]

What the Wallabies must get out of the Georgia game

A spot in the knockout stage at this year’s Rugby World Cup is all but assured for the Wallabies, but they’ve still got a lot to prove in their last pool stage match against Georgia. 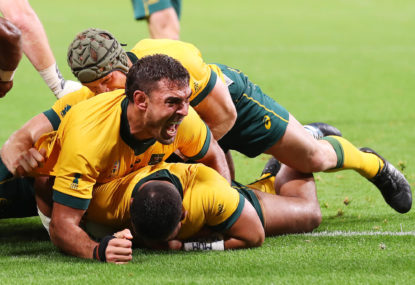 What the Wallabies must get out of the Georgia game

An AFL trade finally happened, the Rugby World Cup group stage is wrapping up, the A-League season is kicking off and there’s a summer of cricket just around the corner. The main football seasons may be over, but episode 51 of The Roar’s Game of Codes podcast sure isn’t short of talking points!