India's act of defiance saves the third Test - and the series

When was the last time an India versus Australia Test match was one-sided?

One will have to dig into those bleak series of 2011-12 and 2013 when one side completely dominated the other. During the second session of Day 4, this Sydney Test looked like was going to be a tame one-sided affair with India losing quickly to Australia.

Even the great Ricky Ponting felt that India will lose and won’t cross 200 runs in the final innings.

However, the Indian team found hope and defiance that characterised their MCG performance and managed to draw the Test match. Such was the audacity of their hope that at one point on Day 5, they were in a position to harbour the thought of even winning the Test match.

It wasn’t only India that showcase defiance. At the start of this Test match, Australia had plenty of questions raised about their batting.

Steven Smith, their lynchpin in the batting unit, hadn’t scored much in the first two Tests.

The team had managed the highest score of just 200 runs in the series among completed innings. Smith was supposed to be struggling against Ravichandran Ashwin; Will Puckovski was battling mental health issues; David Warner was only 80 per cent fit.

However, instead of struggling against the Indians, Steven Smith led the Australian batting resurgence with a masterfully made century and a half-century in the two innings.

Will Puckovski overcame his repeated concussion troubles to score a half-century in his debut Test. There were other notable performances from Cameron Green and Marnus Labuschagne as well.

The Aussies managed to score 300+ runs in both their innings, defying their form book.

When the Indians batted in the first innings, they found run-scoring difficult. Cheteshwar Pujara was a marked man, blamed for disturbing the batting’s rhythm by his slow scoring.

To add to their woes, Hanuma Vihari, Ashwin and Jasprit Bumrah ran themselves out. If this wasn’t enough, Rishabh Pant and Ravindra Jadeja were severely hurt by the short-pitched barrage of the Aussie fast bowlers.

When Bumrah looked sub-par in the third innings battling a stomach injury, India’s cup of woes brimmed. It looked like the team will finally throw in the towel and go through the motions of an already lost Test match.

Regulation catches were dropped, Green hit the bowlers for 95-metre sixes, and SCG crowd abused some of the players on the boundary rope. Everyone expected the team to cave in for a low fourth innings score letting Australia have one hand on the coveted Border-Gavaskar trophy.

The first hint of defiance came when Rohit Sharma and Shubman Gill played positively when they opened the fourth innings.

However, the team had just five healthy batsmen, one of whom will later hurt his hamstring at the start of his innings.

They were not expected to last 131 overs against the best bowling attack in the world. The innings progressed as expected, and India were three batsmen down for 100 odd runs. It was only a question of time before which Australia would wrap up the Indian innings.

Pant and Pujara, who were at the crease, presented a picture of contrasts; Pant, the cavalier batsman, Pujara, the blocker who forgot to score runs.

The story of Indian defiance started with the cavalier batsman out-blocking the blocker. The Indian team looked bereft of intent.

They were expected to fold before Lunch on Day 5. Little did we know that soon after, Pant would unleash a barrage of sixes and fours to take Nathan Lyon out of the attack. Pujara at last found the ideal partner who would allow him to play at his pace.

At the stroke of lunch, the pair took India to a position from which they could even dream of winning. Still, the commentators believed that Australia would win the Test in the third session of Day 5.

One has seen many such Day 5 resistances end with a flurry of wickets once the lead pair was separated. This match started to resemble one such futile resistance when Pant and Pujara got out in the second session of the day.

The job of negotiating 40+ overs was left to a bowling all-rounder, who has struggled with the bat for some years now, a middle-order batsman, woefully short of runs and confidence, an all-rounder with a broken thumb and a bunch of powder puff tail-enders. 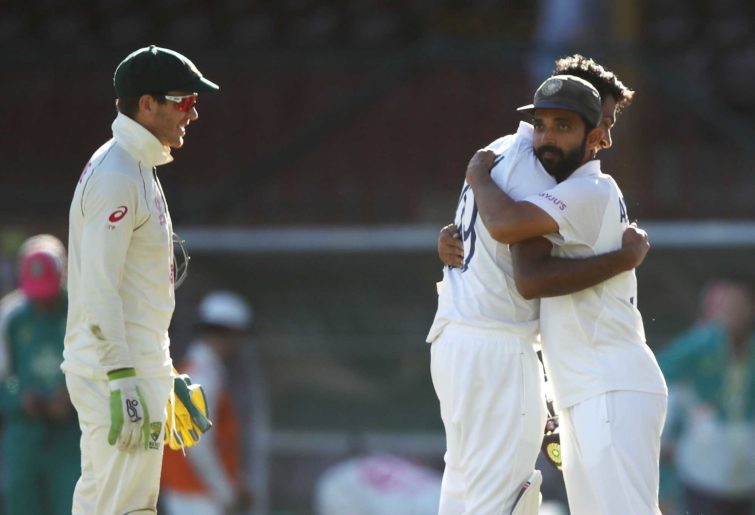 To make matters worse, the middle-order batsman tore his hamstring at the start of his innings. There was no hope.

From this setup, Ashwin and Vihari, the two batsmen at the crease, played out the match-saving act of defiance. Ashwin took blows to every part of his body, Vihari stood firm behind each of his defence. They chose their battles wisely.

Ashwin played the spinner predominantly, and Vihari took on the faster men. Luck would favour them as well. Aussies dropped some easy catches off both the batsmen. Tim Paine missed a few tricks in his strategy.

In the end, Ashwin and Vihari stood unconquered, and India managed to draw the match that looked like lost for many hours since the start of Day 3.

Thus, India and Australia played out, yet another Test match filled with drama and substance. The caravan now moves to Brisbane. The ground referred to as ‘The Gabbatoir’, one where Australia seldom loses, will host the deciding Test of this series.

Will India be able to defy that moniker and slay the Aussies in The Gabbatoir, or will they finally be tamed and conquered by the Aussies at their favourite hunting ground?