Their cricketing union made me think of the traditional Western wedding saying, “Something old, something new. Something borrowed, something blue” – although I thought of it as ‘everything’ blue.

There’s something in it though, for the rise and rise of Indian cricket in the last 15 years, especially combined with this 2020-2021 tour of Australia.

Something old
Teams of yore were forced to train and socialise in a bubble on a cruise liner as they made their way to Australia and domestic foes often became good teammates due to the confined quarters.

This time, however, the Indians were forced by COVID to send one full squad together for quarantine reasons and it meant that any replacements for the three different formats played on this tour had to come from the squad in the bubble, not the fancied FIFO specialty squads believed necessary due to crowded schedules.

A relatively short flight was followed by the necessity of players and officials to basically rely on each other for mental stimulation, but it also allowed for a larger than normal number of Indian first-class players to be exposed to the Indian game plan, intensively and regularly.

The bowling squad, in particular, benefited from this, as the much-vaunted attack who contested the first Test did not have a single representative in the fourth Test. If FIFO players were available and India’s three most-experienced pacemen went down injured, it wouldn’t be a stretch for Ishant Sharma or another player deemed necessary to be flown in cold to join the side.

A country’s depth is often tested on tour, but for four completely different bowlers – three of whom debuted in this series – to carry out the same plan set for experienced, seasoned Test cricketers is a testament to a squad buying into a plan.

Something new
The Indian Premier League can’t be underestimated in the mental approach of Indian cricket now. Twelve years into the IPL, a large number of Indian players have benefited from the rule of a quota of domestic players in franchises. More than that, they have benefited from playing alongside legends of the game from other countries.

They have also massively benefited from being coached by international coaches, bringing a new perspective to the way Indians see training and playing. They’ve come a long way from the negative reaction to Greg Chappell’s changing methods.

What can’t be underestimated is younger players sitting on the sidelines of games chatting about the way to handle situations in the game, expectations of them to perform and the necessity to be mentally ready when chosen.

Sometimes those lessons are more easily absorbed from a ‘second-tier’ international player who has to fight for their place, rather than an elite player who seems to ooze confidence. Mind you, it doesn’t hurt playing alongside the number one bat in Steve Smith or number one bowler in Pat Cummins and have them say that this wicket they’re on is just like a Brisbane strip!

Washington Sundar, at 21, has 87 T20s under his belt for Rising Pune Supergiants and Royal Challengers Bangalore. Mohammed Siraj, at 26, has 67 T20s for Bangalore and Sunrisers Hyderabad, while Shardal Thakur, at 29, has 101 T20s for Mumbai Indians, Kings XI Punjab and Chennai Super Kings.

I may be drawing a longbow, but their combined 255 IPL appearances playing alongside dozens of Australian cricketers has allowed them to demystify the foreign Australia conditions and negate the awe many junior foreign cricketers held for Australian players.

Their experience allowed for these three with a combined six Tests of experience to join together for a hundred-plus batting partnership and a five-for for Siraj, both of which contributed massively to a 2-1 Test series win, after losing in Adelaide, where their ‘first-choice line-up’ was rolled for 36! Surely at the start of the series, none of the three realistically thought they’d play.

Something borrowed
Anil Kumble was a well-respected cricketer for India and his appointment as Indian coach in June 2016 was welcomed by many. In fact, his tenure resulted in wins against West Indies 2-0, New Zealand 3-0, England 4-0, Bangladesh 1-0 and Australia 2-1. Why did he only last a year then?

I guess we’ll have to read Kumble’s, captain Virat Kohli’s and incoming coach Ravi Shastri’s autobiographies for the real stories, but larger-than-life Shastri was appointed in 2017 after Kumble diplomatically stepped aside amid accounts of differences between he and Kohli. 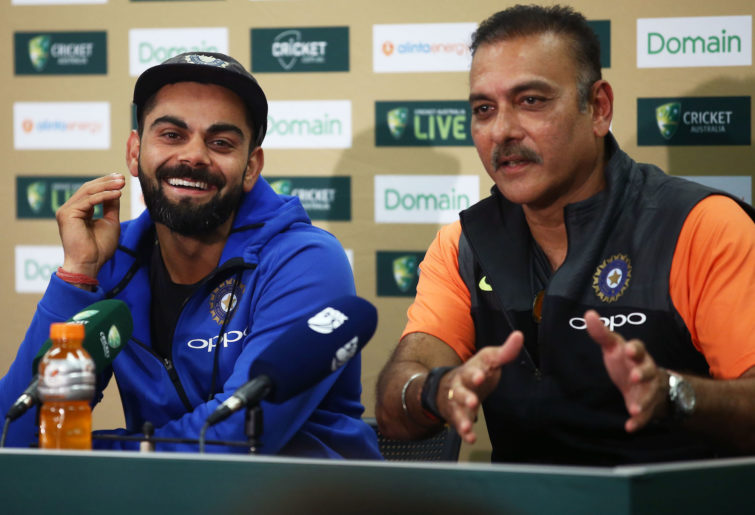 Kohli is an even more larger-than-life personality than Shastri in India. Both can have abrasive personalities, but there’s no disputing their desire to win and dislike for Australia’s domination of Test cricket.

Shastri, in his role as a commentator, was often heard to discuss the approach of Australia, particularly the Steve Waugh philosophy of mental disintegration, often targeting the opposition captain. The “cut off the head of the snake” concept. Not only did Kohli think likewise, but both figures also came along at the right time to support a similar plan of “fight fire with fire”.

Basically, if it can work for them, we’ll borrow it!

The team led by Kohli in 2018-19 in Australia didn’t shy away from this plan and Kohli almost exclusively sledged Australian players, paying particular attention to captain Tim Paine, to the point of literally standing in his way as Paine ran between wickets.

History and those ubiquitous autobiographies from every retired cricketer will determine if this borrowed plan made any difference in changing Indian players’ mindset against Australia, especially in Australia, but it’s instructive that the Indians followed their 2017, 2-1 home win with their first-ever series win on Australian soil in 2018-19, 2-1 and again 2-1 here in 2020-21.

It is now six years since Australia won a Test series against India at home. Maybe it’s time for them to now borrow parts of India’s winning philosophies?

Something blue
In fact, everything blue. The Indian cricket team plays under a blue cap with the uninspiring logo of The Board of Control of Cricket in India!

However, their inspiration comes from an army of fans in blue shirts, blue hats, blue face paint, carrying blue flags whose energy never flags through a whole day’s play. They don’t see anyone else on the field except their heroes.

This blue army from the most populous country in Test cricket dominates crowds, even in COVID-restricted stadiums. That devotion and constant cacophony of adulation would have to make any sportsman feel at home. 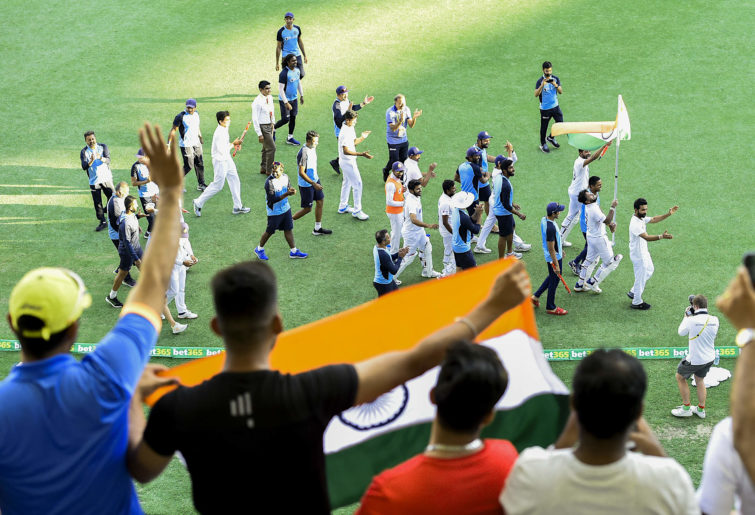 It was noticeable to me that the crowds were a factor for India. An Aussie taking a wicket was applauded by home fans, but absolute delirium ensued for an Indian taking a wicket and the players rode those waves, just as they do at home.

The difference was stark.

The fanatical Indian immigrant wouldn’t think of supporting their new country’s cricket team and combined with a newer, affluent middle class, they have touring supporters who follow series the same as England’s Barmy Army and the regular Aussie tours to England for the Ashes.

The fact is though, that a growing sea of blue dominates stadiums to make players feel at home, to the point of drowning out Australian fans who don’t display the same enthusiasm for their country’s success.

All power to India. They have implemented far-reaching plans – from the BCCI design of the IPL, to the game plans installed by a combative coach and captain, which are now paying dividends, even when the captain isn’t playing.

COVID-19 restrictions may always be followed with ‘these are challenging times’, but an old-fashioned four-month tour, while at times mentally wearing, has galvanised an extended group of players and forced selectors to look inside rather than fly in stopgaps.

Those players have forever broken the hoodoo of Aussie cricket and cricketers, as their Blue Army will attest to in their ever-growing voice.

Australia could do worse than to learn from India’s change in mentality and hopefully that will be played out in the future in five-Test series. As the large Indian ex-pat community in Australia continues to grow, the Border-Gavaskar Trophy should eventually rival the Ashes.

What a great idea for the fifth Test to be played on the 26th of January, Australia Day and Republic Day in India.

Both nations unapologetically celebrating their separation from British rule and while no longer considering themselves British subjects, coming together to celebrate the game given to them by the British that both countries consider their national sport.

In just his fourth T20 international, Daniel Sams underlined why his all-round game could play a significant role going forward for Australia.