“Between stimulus and response there is a space. In that space is our power to choose our response. In our response lies our growth and our freedom.” — Viktor Frankl.

Dave Rennie has selected a training group of 40 players for a three-day camp to lay down the first bricks and mortar for their 2021 Test season. The French will be touring down under in July and, while they missed out on the Six Nations title (which Rennie publicly backed them to win) they will provide a stern test for the Wallabies class of 2021. Rennie has provided the stimulus and space in which they will prepare before the series kicks off. This series will showcase the Wallabies’ response, growth, and freedom under Rennie’s tenure thus far.

The 2020 season was Rennie’s first year as head coach and it started off brilliantly holding the All Blacks to a 16 all draw in his first Test match in Wellington, it could have been even more exceptional had Wallabies fullback Reece Hodge managed to not hit the post with a last-minute penalty goal attempt. The indications after that fixture already showcased that Rennie’s Wallabies would be a different beast to the previous seasons.

However, after that heartbreaking result, the Wallabies teething problems began, a crushing loss at home to the All Blacks and two frustrating draws with a respectable Argentinean team took the gloss off a Wallabies team that was trying to embed its playing style and philosophy.

A two-point win over the All Blacks did tick the win column, however that overall record would read 1-3-2, not the best statistics-wise. But throughout all those fixtures in 2020, there were signs that this Wallabies outfit was growing albeit slightly, in all of the Test matches (bar one) indicated they have the ammunition to the top beat teams consistently, they just need to find the elusive consistency which Rennie will no doubt unearth from his group.

Rennie, wherever he has been in charge of a team, has put an immense amount of weight and value on the culture, or mana within the playing group. An example of this is when the Wallabies are away from home they go back to the hotel, have a quiet drink, and pass a guitar around playing songs by various team members.

Reds lock Lukhan Salakaia-Loto said as much in 2020, “He’s done really well in building the culture and getting the boys to understand different cultures because we’re such a multi-cultural group. Maybe in the past we haven’t understood each other well as we should have.”

With this strong foundation, the Wallabies in time could emulate the outrageously superb Wallabies teams of the late ’90s and early 2000’s as the importance of culture under previous campaigns seemed to have been lost in the fire. Before Rennie, there were constant reports of disharmony within the group, a severe loss of identity or connection with fans, and a playing style that was predictable and overtly attack-minded. To the point where the opposition eventually just had to back their defence because the Wallabies only tried to play wide at any and every chance they got the ball but without guile or craft.

Rennie has made sure that his Wallabies have the fundamentals of the game right, he has added steel and mongrel to his pack of forwards. The set pieces will only get sturdier over time and their scrum has improved immeasurably; the lineout will be a constant work on especially as Rennie is picking four hookers in his current squad. The investment in youth is once again at the core of his squad and with an average age of 25, the potential for their growth is an element Wallabies fans should be getting excited about, considering the World Cup is two years away.

While adding grit and power upfront, the explosive backline players he has to choose from are an absolute wealth of pace, power and Rennie will be tasked with adding the nous and guile which was and can become again a hallmark of Australian rugby. The Wallabies have produced some of the most breathtakingly instinctive backline players over the years, playing what they see in front of them echoing the likes of Stephen Larkham, Tim Horan, and Matt Gitaeu, it will be up to Rennie to get that vision consistently out of James O’Connor, Noah Lolesio and Matt To’omua, his chief playmakers currently.

Andrew Merhtens former All Black flyhalf gave a reality to check to Wallabies fans when he said “I don’t think there is any shame in losing a 2-1 series to France the way they are these days. 3-0 wouldn’t be acceptable but I think winning at least one Test, getting on the front foot and winning the first Test would be a really important one because it could make or break the French tour.”

The Wallabies need to be cognizant that while France is on an upward curve, they are still susceptible to being enigmatic, it’s in France’s nature to be as such. The Wallabies if they can win the first Test match will give them the self-confidence to go on and claim the series which will showcase where they are as a collective. Being the underdog for the series should also play right into the Wallabies’ hands (even though they are at home) as there are few things more dangerous than a Wallabies team being written off by pundits and fans alike.

Rennie will be looking for further growth from his players as they attempt to stop a resurgent French team (which mirrored a lot of the issues) the Wallabies are beginning to erode from previous seasons. The Wallabies’ response against the French will indicate just how much they have grown and how close they are to achieving the freedom to play what they see in front of them.

Injured NRL convert Suliasi Vunivalu says he’s likely to return for the next Queensland Reds game and is intent on winning back respect after an inauspicious start to life in rugby union.

Not one to be bogged down in debate over what position suits Jordan Petaia best, Brad Thorn is keeping it simple at the Queensland Reds. 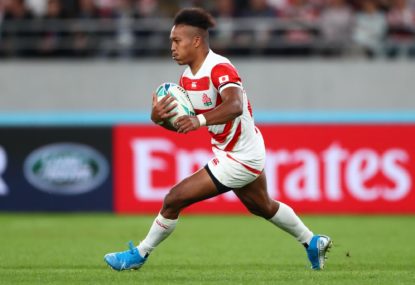