At the end of 2017, young gun Valentine Holmes did the exact same thing as Hayne. Both players were seemingly at the top of their game in the NRL, both had valid credentials and were thriving in the sport. They both left at their peaks, returned, and have struggled to reach that peak again (especially Hayne).

On the other scale of this NFL dream, you have the unheralded Jordan Mailata. Mailata played SG Ball for the Canterbury-Bankstown Bulldogs and then in the 20s competition for the South Sydney Rabbitohs. He was not your household name, but he was a very big frame who ran over his opponents with ease, and looked like a man playing against children at times.

In 2017, he finished his under-20s career with Souths, playing in 12 games, and scoring eight tries. In 2018, Mailata attended the IMG Academy in Florida, to try and chase a dream he saw from the movie The Blind Side, in attempting to try out as an offensive tackle.

In 2018, the big Aussie enters the NFL draft, as a largely unknown pick, and is selected by the Philadelphia Eagles in the seventh round, as the 233rd overall pick. Although he made the 53-man squad in 2018, Mailata didn’t start until season 2020, due to an injury to Hall of Fame tackle, Jason Peters.

Ever since then, Mailata has gone in long strides to get better as an official NFL athlete, and not a league player turned football player. To go from a fairly unknown athlete in Australia in his given sport, to then turn out for a sport abroad he never played, is a huge risk.

After sustaining many injuries between 2018 and 2020 and missing many games he could’ve potentially played, the past off-season in 2021 was the huge turning point.

In pre-season camps, Mailata had always shown improvement and fans have become very much aware of his skills and talents, but with Peters (the left tackle for the Eagles and a sure thing Hall of Famer) not re-signed by the club and deciding to retire as an Eagle, it was Jordan’s time to shine.

With a strong pre-season camp leading into the current season, Mailata was happily awarded the left tackle spot in the offensive line.

With all his background covered, the question needs to be asked: where has the media or fanfare been for this unheralded hero?

When Hayne and Val attempted their ventures and eventually both failed in, they were given all forms of media following them. Yes, Hayne made the final squad and Val made the practice squad, but none of them were guaranteed starters, like Mailata.

Let me paint the picture of how hard what Mailata has done is to do. 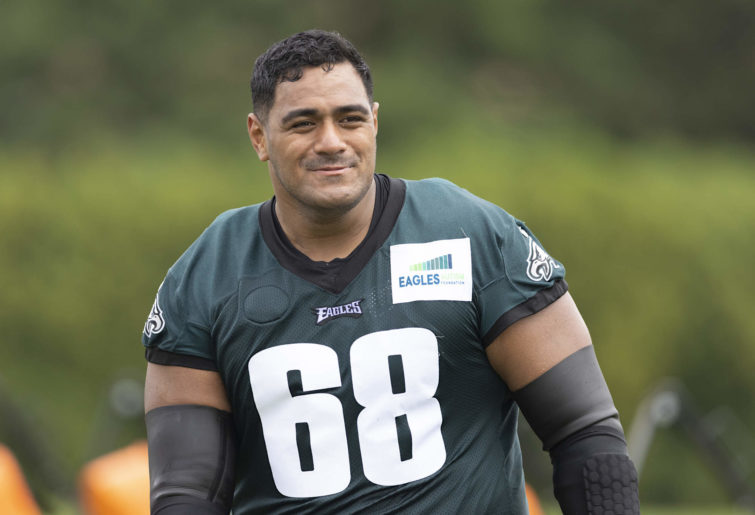 To work your way onto a starting line-up in a NFL squad is no easy feat, but to do it on such a formidable offensive line that is one of the best in the competition when healthy – that is a huge statement. Despite the fact he won the starting position at left tackle for the Eagles, there was very minimal coverage on it in Australian sports media outlets.

To make matters worse, Jordan just signed a whopping four-year, $64 million deal, with $40 million guaranteed, this past week. If that is not enough to make the Australian media celebrate this man, I don’t know what is!

Entering Game 1 for season 2021, Mailata played 100 per cent of snaps, and was vital in a crushing block to lead to an Eagles touchdown.

In a world full of fan favourites and cinderella stories, in Australian sport, there may never be a story like this ever again.

A young Samoan man, growing up playing rugby league in Bankstown, who then follows a chance at an opportunity based on a hit movie, then eventually makes an NFL squad and subsequently becomes a starter on one of the best lines in the NFL… there really isn’t much more you can say about this incredible story.

Australian media, you got behind two high profile athletes who both failed. Let’s get behind the underdog and not claim him when it may be too late, and give this man his roses.